A decades-long scientific debate is finally resolved, thanks to a naked lizard.

Scientists have uncovered the link between the hair of mammals, the feathers of birds and the scales of reptiles. And the discovery, published today in the journal Science Advances, suggests all of these animals, including humans, descended from a single reptilian ancestor approximately 320 million years ago.

“Our world is this engine that can produce beauty and diversity, and it is so powerful that it is sometimes hard to see how we got to where we are. It takes time to put the pieces together,” geneticist and project leader Michel Milinkovitch of the University of Geneva told the NewsHour.

Before this study, the scientific community was divided over how hair, feathers and scales evolved. Developmentally speaking, these different “skin appendages” start almost identically, but then appeared to hit a crossroad. While birds and mammals form placodes — thickened bits in the skin that blossom feathers or hairs — reptiles showed no signs of the feature.

We have this deep heritage between reptiles, birds and mammals—a 320 million year old heritage.
This baffled scientists, as research showed birds being closer relatives of crocodiles and other reptiles than mammals. By not having this placode, reptiles created a kink in the evolutionary (hair)line.

The contradiction split scientists into two camps. Some argued that skin appendages developed independently in all species, so birds and mammals just happened to form the same system. Others stated all species possess a molecular placode — a series of genes that spawn hair, feathers and scales — but reptile skin simply fails to sprout a physical structure.

Then Milinkovitch stumbled upon a naked lizard: a mutant form of the scaleless Australian bearded dragon (Pogona vitticeps). He and Nicolas Di-Poï, biologist of the Institute of Biotechnology at the University of Helsinki, found mutant bearded dragons did not express ectodysplasin-A (EDA)—a gene responsible for forming skin appendages, specifically placodes. 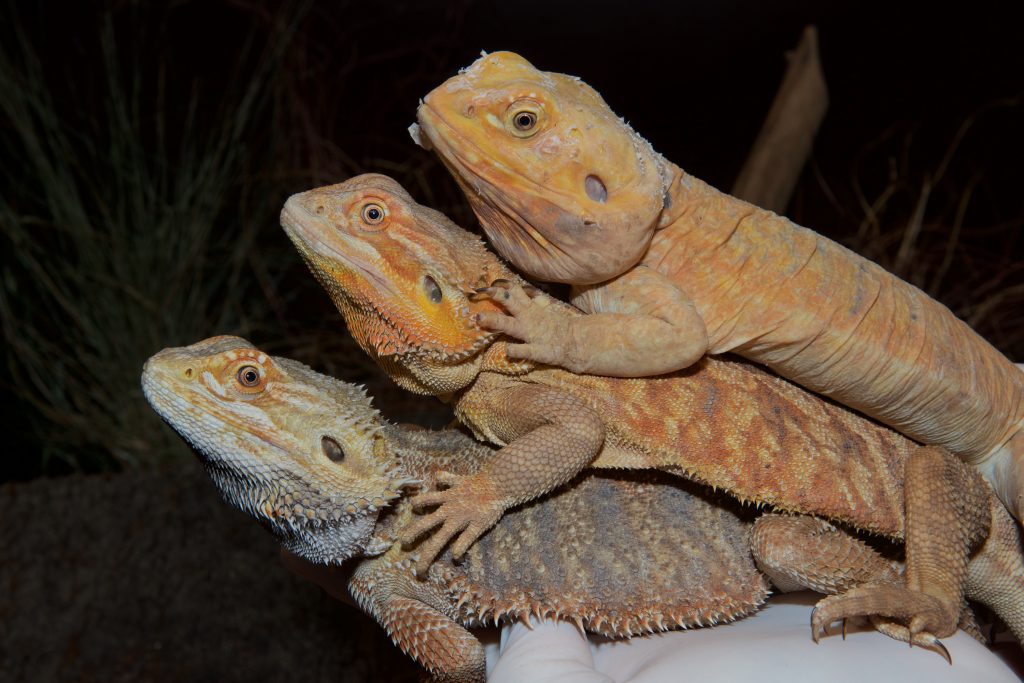 Milinkovitch and Di-Poï compared these naked dragons with their scale-covered counterparts (plus, one lizard species that crosses between the two). They found that the amount of EDA present in cells correlated with size of scales. More EDA meant longer scales; no EDA, no scales.

As the team studied the EDA gene, they discovered the solution to the evolutionary debate: Contrary to previous findings, reptiles do have physical placodes.

“They were always there,” Milinkovitch said. “We were just looking in the right place at the right time.”

With this discovery, the evolutionary kink disappears. All amniotes — creatures that have an extra membrane or barrier around their eggs, including most mammals, birds and reptiles — can trace their lineage back to a common reptilian ancestor. This includes bearded dragons, chickens, mice, and humans, just to name a few.

“We have this deep heritage between reptiles, birds and mammals — a 320 million year old heritage,” Milinkovitch said.

Marcelo Sánchez-Villagra, a paleontologist at the University of Zurich, told Discovery News this common ancestor wouldn’t fit the modern definition of reptiles. He and his colleagues described an intermediary group of animals known as “reptiliomorphs” — which likely carried features of reptiles and amphibians.

“There is much we still do not know about vertebrate animals,” Sánchez-Villagra told Discovery News. “Comparative approaches to understanding evolution, which combine classical anatomical studies with developmental genetic techniques, can provide a better understanding of the evolutionary origins of fundamental structures.”

Jacob Musser, an evolutionary biologist at the European Molecular Biology Laboratory in Germany, was one of the researchers behind the molecular placode camp. He says these findings provide important information about the evolutionary development of placodes. But he aligns with Sánchez-Villagra, saying the conclusion that all scales, feathers and hairs come from “the scales of their reptilian common ancestor” is not necessarily accurate.

“Their findings suggest that even though these structures look very different, they may have evolved from a common structure in the ancestor of reptiles and mammals,” Musser told NewsHour. “But what this structure actually looked like is unclear. It may not have been a scale.”​​