NASA is setting its sights on getting a much closer, deeper look at Jupiter’s tantalizing moon, Europa, and the mysterious ocean hidden beneath its icy crust. With two orbital missions already in the works, by NASA and the European Space Agency, NASA is looking further into the future toward a possible mission to put a robot on the surface.

Europa’s ocean, which may lie under only a few miles of ice—perhaps only a few hundred feet in some places—may be as deep as 30 miles, and contains more water than in all of Earth’s oceans. With the possibility of some form of hydrothermal vents supplying heat and life-supporting chemicals on the ocean’s floor, like those on Earth, the tiny moon has become one of the hottest subjects in the search for extraterrestrial life in the solar system. 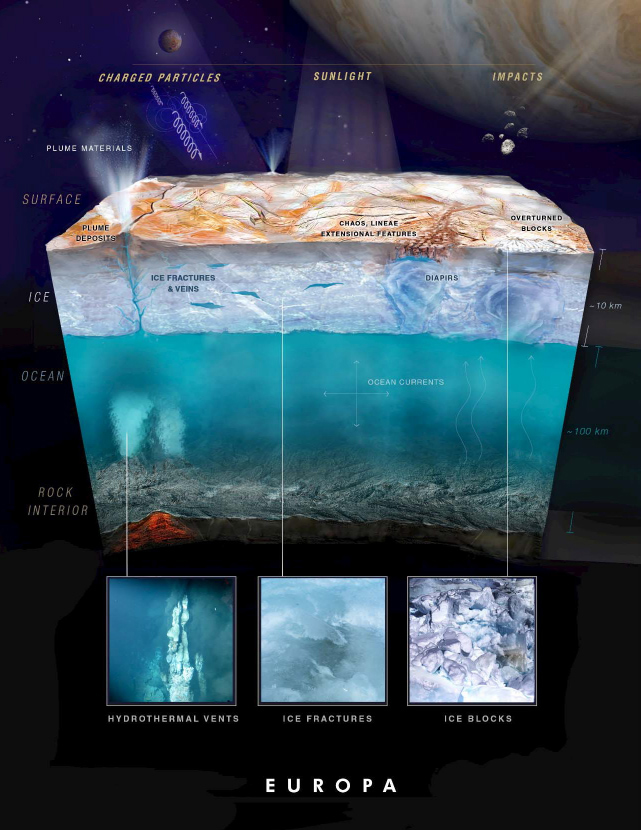 Artist illustration showing speculations on the conditions in Europa’s ocean based on observed evidence on and above its surface. Photo by NASA

In advance of issuing a call for formal proposals, NASA is priming the scientific community to begin thinking about what set of scientific instruments should be included on a lander. Ultimately, ten proposals will be selected to proceed to a competitive concept study, which carries funding of $1.5 million for each selected group, who will have a year to submit their technical proposals.

Past spacecraft, including NASA’s Voyager and Galileo, gathered the first evidence leading to the discovery of Europa’s ocean: patterns in the cracks of the moon’s icy crust interpreted as ice sheets floating on water, as well as disturbances in Jupiter’s magnetic field in Europa’s vicinity that can be explained by the presence of a salty ocean. 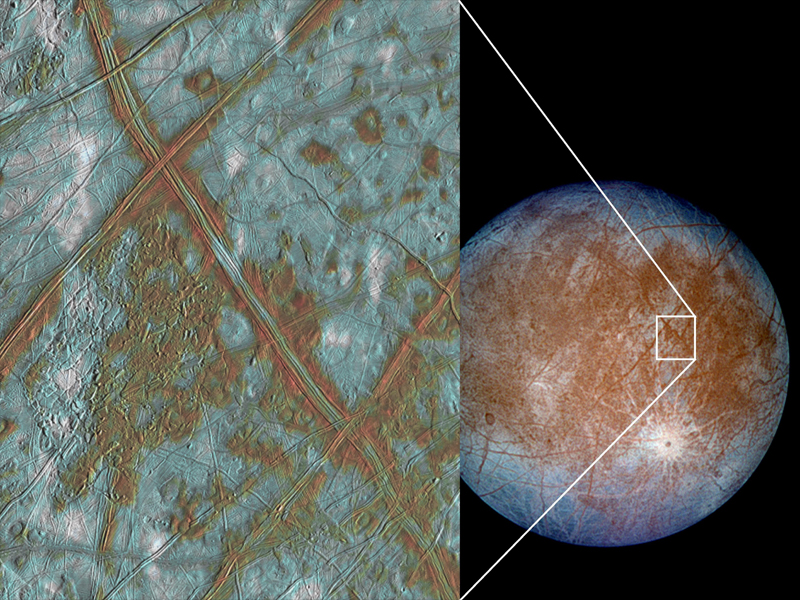 Fractures and lines in Europa’s icy surface, one of the first pieces of evidence for the existence of the moon’s ocean hidden beneath. Photo by NASA/JPL-Caltech/SETI Institute

Europa was discovered by Galileo in January 1610, along with three other large moons, the “Galileans.” Through a small telescope like Galileo’s, they appear as mere star-like dots, and for over 300 years that’s about all that humans could see of them. Only when the first robotic probe, Pioneer 10, passed through the Jupiter system did we get a closer picture. 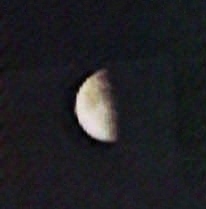 Our first close-up look at Europa, through Pioneer 10 in 1973. Photo by Pioneer 10/NASA

How would you design a robot to probe Europa’s deep dark waters from a landing site on the icy surface above? That’s the primary framing question for any competitive design concept. NASA will only select proposals that address specific scientific goals—namely, to look for evidence of life and a habitable environment in Europa’s ocean.

What instruments would you include? Ground-penetrating radar to survey structures in the moon’s crust? Chemical detectors to sniff for water vapor and other volatiles that may seep up from the ocean? Motion sensors to measure the movements of floating ice? Sensitive microphones to listen for any sounds penetrating the ice from below? NASA has issued just the right challenge to get imaginations churning…. 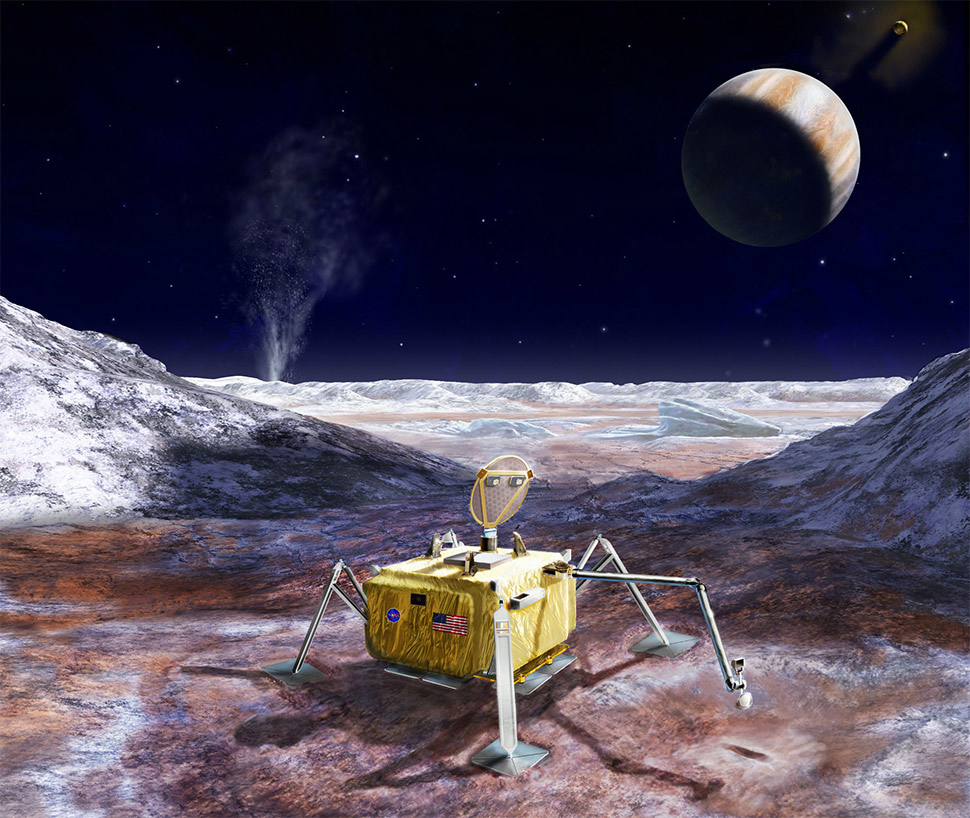 Artist concept of a possible future landing mission to the surface of Jupiter’s ocean-bearing moon, Europa. Photo by NASA

It’s not technically feasible at present to deliver a probe directly to the waters under Europa’s ice crust—let alone to the ocean floor tens of miles below that—so a lander will need to do its job without direct visual inspection. Pictures of Europan jellyfish swimming around would be nice—but we can’t get a camera down there yet. It’s difficult enough exploring the depths of Earth’s oceans….

What else does the lander need?

The final design of the lander ultimately will comprise more than the scientific instruments it carries. There will be plenty of engineering challenges and considerations further along in the design process.

Simply landing the probe will require some serious thought. Unlike landings on Venus, Mars, and Saturn’s moon Titan, parachutes are not an option since Europa has no atmosphere to help slow a lander down. Some form of rocket-powered descent and soft touchdown might work.

Deciding where to land requires planning as well. A landing site where the ice is thin and the waters relatively near the surface could make it easier for the lander to measure properties of the ocean, but we know very little about the nature of Europa’s surface terrain. Other than a few pictures taken by passing spacecraft, Europa is mostly unexplored. Planners should get some guidance from surveys by upcoming missions–NASA’s Europa Clipper and ESA’s “JUICE“—but right now the icy moon is terra incognita.

Another design consideration is a lander’s end-of-mission disposition. The nuclear-powered Galileo spacecraft was deliberately incinerated in Jupiter’s atmosphere at the close of its mission, to prevent it from crashing into a moon like Europa and contaminating a potentially life-bearing environment. Even if the lander doesn’t carry nuclear power cells, an outer space version of environmental “green” responsibility is a requirement.

Scientists preparing concept proposals don’t need to concern themselves with the robot’s landing or safe-self-destruct modes right now–just its scientific capabilities. Now is the time for dreaming up how the lander might tell us what, if anything, is swimming in the waters of Europa.

Benjamin Burress has been a staff astronomer at Chabot Space & Science Center since July 1999. He graduated from Sonoma State University in 1985 with a bachelor’s degree in physics (and minor in astronomy), after which he signed on for a two-year stint in the Peace Corps, where he taught physics and mathematics in the African nation of Cameroon. From 1989-96 he served on the crew of NASA’s Kuiper Airborne Observatory at Ames Research Center in Mountain View, CA. From 1996-99, he was Head Observer at the Naval Prototype Optical Interferometer program at Lowell Observatory in Flagstaff, AZ.