The planet Mercury earned a new crater when NASA’s MESSENGER probe smashed into its scorched surface earlier this afternoon. The intentional crash landing ended an 11-year mission that brought us the most intimate peeks at our solar system’s smallest planet.

NASA estimates the ship crashed at 3:26 p.m. EDT, though Earth’s final view of the descent was obscured by the little red planet. The collision likely created a 52-foot pockmark near the “Shakespeare basin” – a 250-mile-wide crater. NASA scientists believe the probe was traveling around 8,750 miles per hour when it obliterated near one of the basin’s ridges.

“We monitored MESSENGER’s beacon signal for about 20 additional minutes,” mission operations manager Andy Calloway of Johns Hopkins University Applied Physics Laboratory said in a statement. “It was strange to think during that time MESSENGER had already impacted, but we could not confirm it immediately due to the vast distance across space between Mercury and Earth.”

MESSENGER had circled Mercury 4,104 times since entering the planet’s orbit on March 18, 2011. Before then, it had traveled 4.9 billion miles from Cape Canaveral, flying by Venus twice and snapping up-close photos of Mercury’s nearest neighbor. 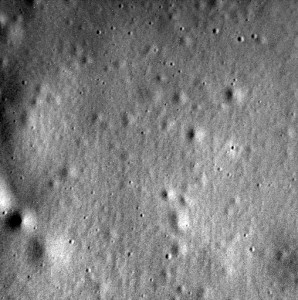 This image of Mercury’s surface is the last one acquired and beamed back to Earth by the Messenger spacecraft. NASA/Johns Hopkins University Applied Physics Laboratory/Carnegie Institution of Washington

While in orbit, MESSENGER made many revelations, including that the diminutive planet is shrinking. It also beamed photos back to Earth of lava flows coursing across the planet’s poles. Unlike the Earth’s mountainous volcanoes, Mercury’s molten ooze creeps out of the ground from unknown sources.

“Today we bid a fond farewell to one of the most resilient and accomplished spacecraft to ever explore our neighboring planets,” MESSENGER’s principal investigator Sean Solomon of Columbia University’s Lamont-Doherty Earth Observatory said in a statement. (Check out Solomon’s top-ten list of MESSENGER discoveries.)