How NASA is hunting for signs of life on Mars

Perseverance, NASA’s latest rover, landed on Mars in February with a mission to answer questions about the past and future of life on the Red Planet.

Over the course of that mission — lasting nearly two years, or one Martian year — the rover will conduct research using a range of instruments designed to probe the planet’s landscape for glimpses into its ancient past.

Researchers hope to gain a better sense of whether primordial life once existed on our celestial neighbor (and if so, where and when), and how technology may pave the way for astronauts to sustain their own lives during future voyages to its now-desolate surface.

In a few short months, the rover and its companions have achieved massive technological feats and uncovered a trove of meaningful data and fascinating photos. Perseverance has already overseen the successful demonstration of two pieces of experimental technology — a small helicopter named Ingenuity and a toaster-sized contraption called MOXIE that converts Mars’s carbon dioxide-heavy atmosphere into oxygen.

The rover is stationed in Mars’s Jezero Crater, which researchers believe was home to a lake more than 3.5 billion years ago. Researchers back home have been rolling out software updates and checking out the highly autonomous vehicle’s accessories. Over the next few weeks, Perseverance will begin evaluating local geology in search of rock samples that may hold important clues.

Ultimately, the hope is that a future mission can pull off the complicated task of transporting a cache of those samples to Earth for further study. (That plan is still a proposal for now, and hasn’t yet been signed off on by NASA.)

It’s been an eventful first few months for Perseverance, its technological companions and the hundreds of researchers who monitor and operate them here on Earth. Here’s a look at what they have accomplished, and what’s next for the mission.

Making oxygen on Mars, with MOXIE

In NASA’s Mars mission, MOXIE means more than spunk and determination — it stands for Mars Oxygen In-Situ Resource Utilization Experiment (“in-situ” means “in place”). In April, the pint-sized piece of tech achieved its goal of extracting oxygen from the Martian atmosphere.

Pulling carbon dioxide from the atmosphere and splitting it into carbon monoxide and oxygen, the device produced about 5 grams of oxygen, roughly enough for an astronaut to breathe for 10 minutes.

During the mission’s first year, MOXIE will perform that demonstration up to 10 times. The density of the planet’s atmosphere changes dramatically depending on factors like whether it’s night or day — which significantly influences temperature — as well as which season it is. Researchers aim to determine whether it will work in those varying conditions.

“The basic idea is to produce oxygen during all seasons, during all times of day, and that’s the plan,” said Jeffrey Hoffman, a former astronaut and current deputy principal investigator of the MOXIE experiment.

An air pump pulls in carbon dioxide gas from the Martian atmosphere, which is then regulated and fed to the Solid OXide Electrolyzer (SOXE), where it is electrochemically split to produce pure oxygen. Credit: NASA/JPL-Caltech

If future generations of MOXIE ever accompany astronauts on trips to Mars, the machine will have to be equipped to run at all times — the existing MOXIE must be turned on and allowed to heat up to about 1,400 degrees Fahrenheit ahead of each demonstration — and automatically calibrate itself to safely convert atmosphere at any density.

“One of the purposes of MOXIE is not just to demonstrate that it works, but to learn enough about the whole system so that we can actually help inform the design of a much larger scale autonomous oxygen producing system, which is the ultimate goal of this whole enterprise,” Hoffman said.

A crew of six astronauts sustaining themselves on Mars for two or so years would need “maybe a ton of oxygen,” he added. The rocket they’d rely on to lift them off Mars and return them home would need about 25 to 30 times as much oxygen to fire up.

Sending all of that oxygen with any given mission would be a monumental and expensive feat. If you can produce the oxygen you need on Mars instead of lugging it there, “you’re way ahead of the game,” Hoffman said.

Flying a remote-control aircraft on another planet

The Ingenuity helicopter is the first remotely controlled aircraft to successfully take flight on a planet other than our own.

“This mission makes a huge difference in showing it’s not just a dream,” said Havard Grip, who serves as Ingenuity’s chief pilot and flight control lead. “This is reality.”

Five test flights were planned for Ingenuity, each planned to be a little bit farther or faster than the one before it. The experiment was such a resounding success that Ingenuity keeps taking to the air.

During its sixth flight, an error occurred for the first time: One of images that Ingenuity regularly takes to orient itself was lost, meaning that each subsequent image had an inaccurate timestamp. That confused the helicopter’s system, Grip explained. It began trying to “correct things that weren’t really errors,” which impacted the algorithm that’s used to keep Ingenuity stable and under control.

Fortunately, NASA engineers designed the helicopter to account for timing errors, so Ingenuity was able to complete a safe landing.

This obstacle, an “unknown unknown” challenge, as researchers sometimes put it, offered a kind of stress test, which Ingenuity passed handily.

“We were extremely pleased with how everything has been performing up until this point,” Grip said. “And really that can be said for flight six, too, in many ways.” 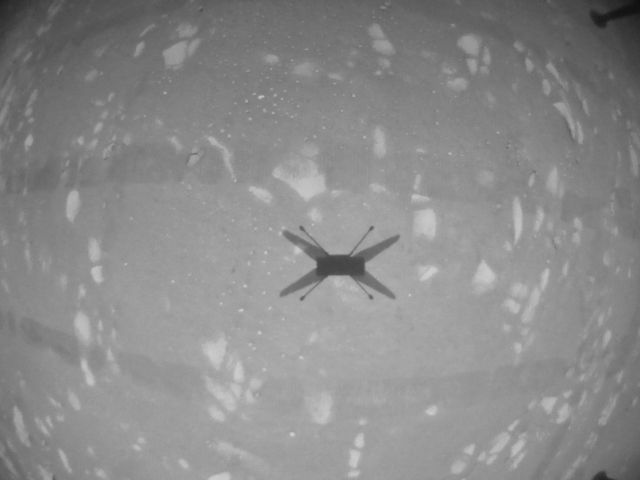 This black-and-white image was taken by the navigation camera aboard NASA’s Ingenuity helicopter during its third flight, on April 25, 2021. Credit: NASA/JPL-Caltech

Plans for flight seven involve sending the helicopter around 350 feet south of where it now sits, and will be the second time Ingenuity “will land at an airfield that it did not survey from the air during a previous flight,” according to NASA. Researchers are confident that this location “is relatively flat and has few surface obstructions” based on images captured by NASA’s Mars Reconnaissance Orbiter.

Ingenuity’s performance so far has generated “mountains” of useful data, Grip said, especially regarding how the helicopter itself has behaved in real-life conditions on Mars. Much like MOXIE, that information will be invaluable when it comes to engineering future generations of comparable technology.

Grip emphasized that there’s no expectation that anything Ingenuity does from here on out will help Perseverance achieve its goals, but any useful information it can offer is a kind of welcome bonus. He noted that aerial images Ingenuity snapped during a recent flight may be of interest to the researchers who work on Perseverance.

Ingenuity’s time is expected to wrap up at some point this August, after which point it will be left behind. Until then, it will remain in the general vicinity of Perseverance, which serves as a kind of communication hub that connects it to researchers on Earth.

Regardless of what becomes of Ingenuity, the helicopter has already achieved an objectively impressive goal. “We actually have an operating helicopter on Mars, and it’s doing its job fabulously,” Grip said.

Hunting for history in Martian rocks

After many Martian days, called “sols,” of supporting these tech demonstrations and having its myriad tools and accessories meticulously evaluated by researchers back home, Perseverance is ready to kick off its own scientific journey.

The team on Earth has been transmitting software updates that enable crucial features, like improving the rover’s navigation system so that it’s able to map and avoid any hazards that are in the way of its predetermined path.

Perseverance was built with “very smart, very autonomous” software, said Jennifer Trosper, deputy project manager at NASA’s Jet Propulsion Laboratory. But rather than put all of its bells and whistles into action upon arrival, researchers instead took a more cautious approach that involved taking “baby steps” to make sure everything was working properly.

So far, the rover is looking good and is expected to collect its first samples in late June or early July, once researchers can confirm key capabilities, like its auto-navigation and final sampling systems, are in order.

With no road maps on Mars, I’m building my own as I go. There are lots of places I want to explore, and mapping while I drive will help me see and do more. Let the road trip begin. pic.twitter.com/cCaaV3M9Gs

Perseverance is expected to pick up four times as many samples as did Curiosity, NASA’s previous rover. The rover is more advanced than its predecessor, which allows it to get more done in less time and with more autonomy.

“We have to be faster. We have to be more efficient. We have to drive to locations much more quickly,” Trosper said. “So that’s what these things are enabling us to do.”

At the moment, Perseverance is residing in one of the oldest parts of the lake bed that Jezero Crater once housed — a lucky accident resulting from the rover landing a bit off its intended target. It’s possible that the rover never would have made it to this particularly aged spot otherwise, Trosper noted.

The ancient, exposed terrain, which lies to the east of a nearby sand dune field, may offer some of the oldest samples Perseverance gets on its mission.

When it comes to geological sampling, older is better because, Trosper explained, geology is just “layers of information that tells you what happens over time.” Samples from this location should help answer questions about the farthest reaches of Jezero’s primordial past.

“Being able to get samples from this very old part of the crater is really important to making the whole story fit together,” she added. “It’s a significant piece of the puzzle.”

Testing out my tools as I move into more science. Used my robotic arm to get right up close to this rock after zapping it with my laser. Can you tell I’m really into rocks?https://t.co/7w3rbvbyoL pic.twitter.com/Yl0gzduCWi

Perseverance is equipped with tools that will allow researchers to examine the rocks it comes across and determine which ones are worth sampling. When faced with a rock of interest, Perseverance’s drill can use one bit to abrade, or gently shave down, part of its surface, and another to blow a puff of air that removes the resulting dust. The rover’s remote science instruments can then determine the elemental composition of the rock itself, and what information it might hold.

Sedimentary rocks are particularly useful in the lakebed because they’re more likely to have captured evidence — or “biosignatures” — of ancient life, if any ever existed there.

Igneous rocks, according to NASA, act as “geological clocks” that can help researchers map a more precise timeline of how the local landscape formed billions of years ago.

For Trosper, Perseverance’s high-tech capabilities are just as exciting as the mysteries it’s set out to solve.

“Obviously the science itself is phenomenal, because this is the best place on Mars to look for evidence of ancient microbial life, and we’re here,” Trosper said. “But the [rover’s] autonomy is also one of the hallmarks of this mission that I really am excited about.”

Left: NASA’s Perseverance Mars rover took a selfie with the Ingenuity helicopter, seen here about 13 feet from the rover in this image taken April 6, 2021, the 46th Martian day, or sol, of the mission by the WATSON camera on the SHERLOC instrument, located at the end of the rover's long robotic arm. Credit: NASA/JPL-Caltech/MSSS