NASA releases clearest photos of Pluto we may see for decades

NASA released two black and white images of Pluto on Friday, billing them as the dwarf planet’s “best close-ups that humans may see for decades.”

The snapshots, which were taken in July, are among the most recent set of photos sent back to Earth by NASA’s nuclear-powered spacecraft New Horizons, during it’s closest flyby of Pluto, some 3 billion miles away from Earth.

The images form a 50-mile-wide strip of the planet, showing a mix of cratered, mountainous and glacial terrain.

“These close-up images, showing the diversity of terrain on Pluto, demonstrate the power of our robotic planetary explorers to return intriguing data to scientists back here on planet Earth,” John Grunsfeld, former astronaut and associate administrator for NASA’s Science Mission Directorate, said in a statement. 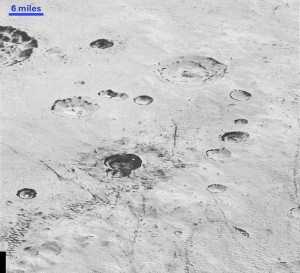 Pluto’s icy cratered plains, including layering in the interior walls of many craters, are seen in this high-resolution image from NASA’s New Horizons spacecraft released December 4, 2015. Photo courtesy of NASA Handout via Reuters

It will reportedly take about one year to transfer all of the photo and data collected by New Horizons to reach the earth, but researchers expect more detailed and clear images to come in over the next week — a much faster feat compared to earlier space missions.

“Nothing of this quality was available for Venus or Mars until decades after their first flybys; yet at Pluto we’re there already — down among the craters, mountains and ice fields – less than five months after flyby!” Stern said.