NASA Technology, at Work on Earth 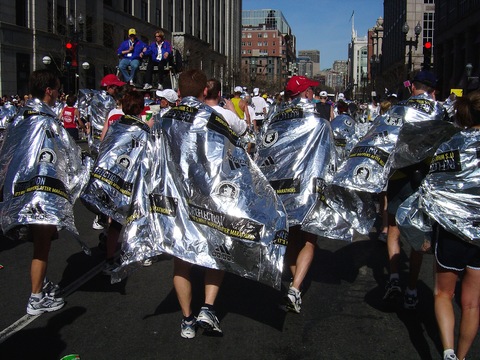 Variations of many NASA inventions, initially developed for space travel and exploration, have worked their way into consumer culture, ranging from common household items to complex medical technology. Since 1973, when NASA began officially recording these so-called “spinoffs,” they have documented more than 1,750 items.

One of NASA’s most important contributions might simply be bringing large teams of scientists together to solve problems, according to Roger Launius, curator at the National Air and Space Museum. “Then, when they disperse to go to other corporations or universities, they take with them the knowledge they gained through the process,” he said. Hence, spinoffs are born.

Mylar, an aluminum-coated plastic material that traps and reflects heat, has flown on every manned space flight and coated thousands of satellites and the Hubble telescope. In space there is no atmosphere to conduct heat, so there are drastic temperature changes between shadow and light. Mylar was initially developed for NASA in the 1950s to protect its space crafts from the sun’s heat and to keep them insulated.

David Diegan, who formerly worked at National Metalizing of Cranbury, N.J., which manufactured mylar for NASA spaceflight, saw a real-life application of the material when he began running marathons in 1978.

“The New York City Marathon had big problems when it went from a really small obscure event that almost no one participated in, to almost overnight, a huge event with thousands of finishers,” Diegan said.

The large volume of runners created congestion at the finish line, which meant it could take runners more than 15 minutes to get to their clothes. In the brisk fall New York City weather, runners were developing hypothermia after the race. Diegan noticed that some people were using mylar blankets for warmth at the end of the race.

“When I finished New York Marathon in 1978 and 1979 I saw this sea of people in silver and nothing on it, and I saw a missed opportunity,” Diegan said.

So he pitched the idea of a branded mylar marathon blanket to the head of the New York Marathon. Thirty-one years later, Diegan owns his own company, Advanced Flexible Materials, which manufactures an updated version of the aluminized plastic material for emergency kits and finish line blankets.

In the early 1990s NASA set out to build a smaller camera to send into space with the spacecrafts to record images of planets, moons, asteroids and other objects in space. At the time, cameras that flew on deep space missions were roughly the size of a microwave, consumed a lot of power, and were highly susceptible to radiation. When mounted in a spacecraft, the cameras took up room and added excess weight.

Miniaturizing would allow NASA to build a smaller, faster and cheaper space craft. But inventing a smaller camera wasn’t simple. NASA is famous for its clear images of space; a smaller camera would have to maintain that same image quality. With those caveats in mind, Eric Fossum and his team, working at the Jet Propulsion Lab, invented the “camera on a chip,” a miniature imaging system that fits a large amount of data, electronics and analog-to-digital converters on just a small piece of silicon.

In the mid-1990s Fossum realized that his technology could be successful in the mainstream market. He and few other team members from the Jet Propulsion Laboratory acquired the licensing rights for the camera and formed a new company, Photobit. At first, Photobit’s technology was used for automotive applications, such as headlight dimmers, and medical technologies, such as the swallowable pill camera.

The technology got a boost in the early 2000s when it became marketed as a cell phone camera. Fossum, whose company has changed hands several times and now goes by the name Aptina, was recently inducted into the National Inventors Hall of Fame for his camera innovation.

Following the Apollo 1 test flight fire that resulted in the death of three astronauts, NASA reevaluated its nylon space suit design. The new space suit material needed to be durable, strong and most importantly, fireproof. NASA sought out two companies, DuPont and Owens Corning Fiberglass, that proposed a material made of ultrafine woven glass coated in Teflon, a noncombustible fabric which NASA integrated into the Apollo space suits. 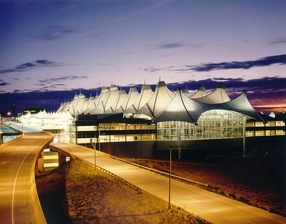 Meanwhile, Bird Air, an architectural contractor, was seeking a new construction fabric. They had been constructing smaller fabric designs, but needed a durable fabric for large structures. NASA’s Teflon fabric was a perfect fit. The Teflon material is pound for pound stronger than steel, but it is aesthetically unique as well. The material is semi translucent, so during the day it lets in a lot of natural light and at night glows like a beacon.

“It’s class A, fire-rated, non-combustible, it’s got a Teflon coating which really repels dirt and doesn’t stick, and it lasts in temperatures ranging from -150 degrees Fahrenheit to 450 degrees Fahrenheit,” said Dave Capezutto. “For us it was perfect.”

Bird Air completed the first Teflon roofing structure, the Sports Science and Athletics Pavilion at the University of La Verne, in 1973. The Denver International Airport, designed to look like the Rocky Mountains, is also constructed from the Teflon material.