Statistics wins the day! NASA has confirmed 1,284 new exoplanets, the largest number ever announced at once, thanks to an innovative math formula.

The algorithm sifts through data collected by the Kepler telescope, NASA’s exoplanet observatory, and separates exoplanets circling around foreign stars from false positives. The innovative approach doubles the number of verified exoplanets, raising the tally to more than 3,200.

“Planet candidates can be thought of like bread crumbs,” study leader and Princeton University astrophysicist Timothy Morton said during a press conference. “If you drop a few large crumbs on the floor, you can pick them up one by one. But, if you spill a whole bag of tiny crumbs, you’re going to need a broom. This statistical analysis is our broom.”

The analysis works by finding impostors. The Kepler telescope is essentially a $600 million shadow spotter. The spacecraft stares at stars and waits for objects to cross their path. These objects cast silhouettes or eclipses, which are recorded as drops in starlight.

Gravitational microlensing is another phenomenon that Kepler’s K2 mission uses to find exoplanets. As an exoplanet passes in front of a more distant star, its gravity causes the trajectory of the starlight to bend, and in some cases results in a brief brightening of the background star as seen by a telescope. The phenomenon enables scientists to search for exoplanets that are too distant and dark to detect any other way. Photo and caption by NASA Ames/JPL-Caltech/T. Pyle

Here’s the problem. Planets aren’t the only things that get in the way. Brown dwarfs or low-mass stars might slide by…or the star might be grazed by a neighboring star. As a result, past surveys of Kepler data relied on follow-up analysis by ground-based telescopes, which is expensive and time-consuming.

The new algorithm is trained to spot the silhouette patterns associated with false positives buried inside Kepler’s data trove. In the end, the researcher can gauge the probability of whether a silhouette was created by a wayward brown dwarf or an exoplanet — with greater than 99 percent reliability.

“They say not to count our chickens before they’re hatched, but that’s exactly what these results allow us to do based on probabilities that each egg (candidate) will hatch into a chick (bona fide planet),” study co-author Natalie Batalha, a Kepler mission scientist at NASA’s Ames Research Center in Moffett Field, California.

Today’s announcement is the first scientific update since the Kepler telescope unexpectedly entered “emergency mode” on April 8. The incident happened right before a maneuver to point the spacecraft toward the center of the Milky Way galaxy. NASA recovered the 600 million dollar space observatory within three days, But the cause remains unknown. 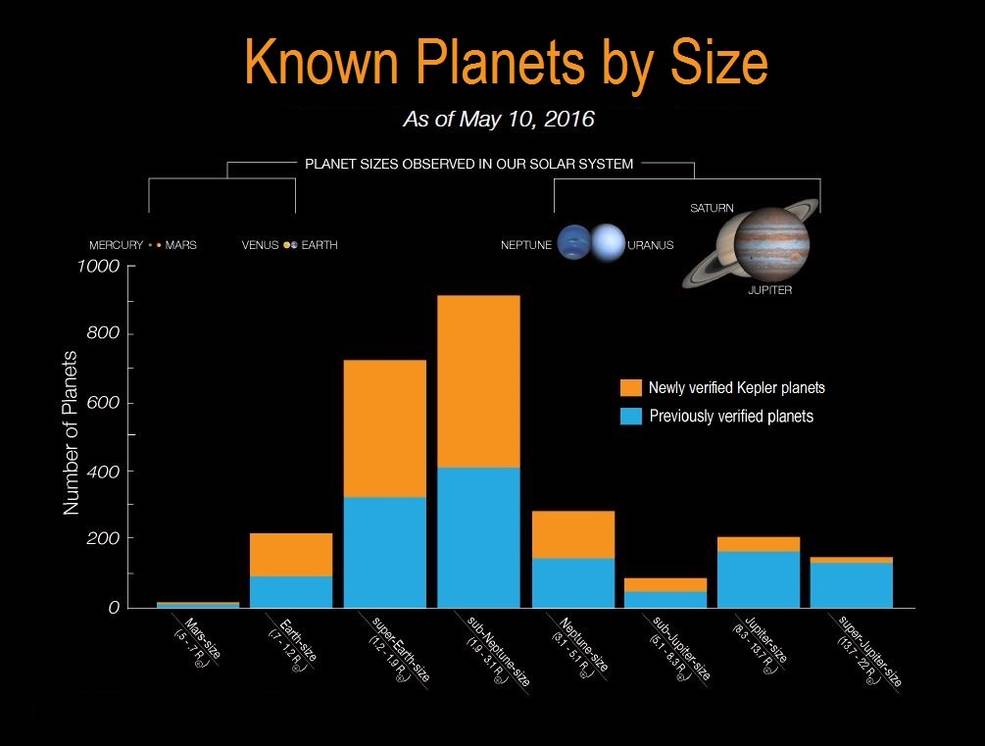 The time saved by skipping the extra step of ground-based confirmation could be huge for Kepler’s objective of finding habitable Earth-sized planets before the mission ends September 2017, Batalha said. The Kepler mission has discovered 2,325 of the verified exoplanets.

Based on @NASAKepler data, our galaxy has more than 10 billion rocky planets that live in the habitable zones of their stars. — @nbatalha

Paul Hertz, astrophysics division director at NASA headquarters in Washington, agreed and said that the algorithm could aid Kepler’s successors, the Transiting Exoplanet Survey Satellite (TESS) and the James Webb Space Telescope. TESS, due to launch in 2017, will track more than 200,000 stars at a time in search of the exoplanet eclipses. James Webb will hit the skies a year later and will be able to analyze the outer atmospheres of exoplanets. The ultimate goal is to study this light and look for hints of water vapor and other atmospheric ingredients needed for life, Hertz said.

“One of the great questions of all time is whether we’re alone in the universe. We live in a time when science can answer this question,” Hertz said. 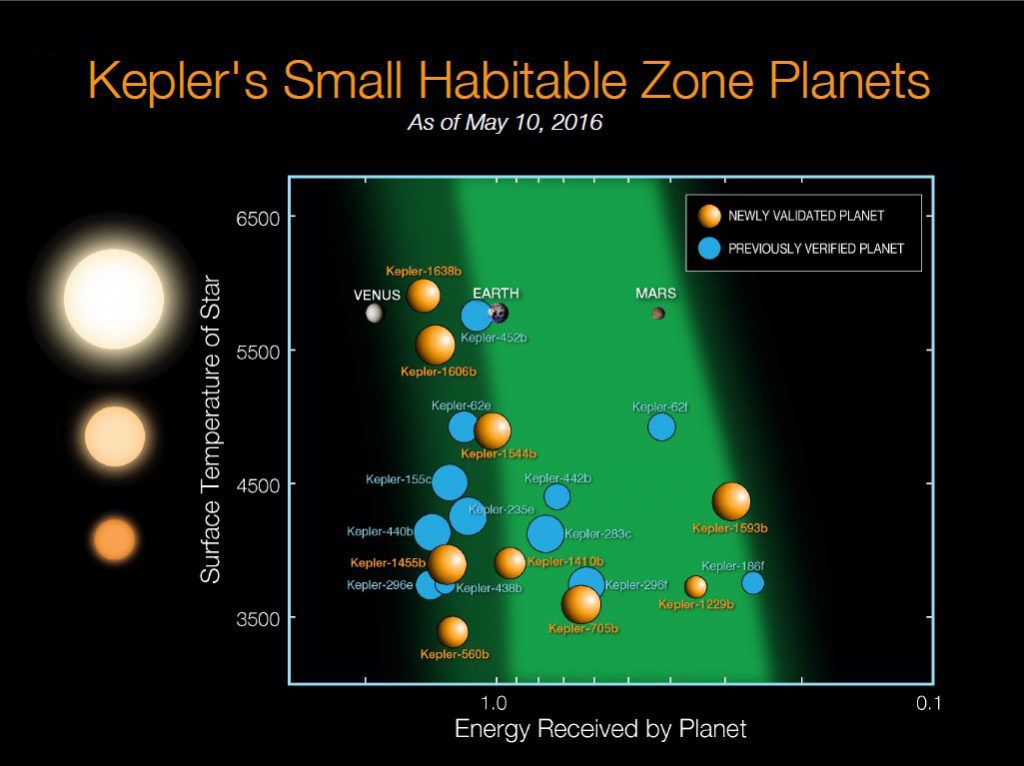 Since Kepler launched in 2009, 21 planets less than twice the size of Earth have been discovered in the habitable zones of their stars. The orange spheres represent the nine newly validated planets announcement on May 10, 2016. The blue disks represent the 12 previous known planets. These planets are plotted relative to the temperature of their star and with respect to the amount of energy received from their star in their orbit in Earth units. The sizes of the exoplanets indicate the sizes relative to one another. The images of Earth, Venus and Mars are placed on this diagram for reference. The light and dark green shaded regions indicate the conservative and optimistic habitable zone. Photo by NASA Ames/N. Batalha and W. Stenzel

The exoplanet-hunting algorithm was published today in The Astrophysical Journal.

Left: A new formula streamlines the process for validating planets outside of our solar system. Illustration by NASA