The two studies — one that examined honeybees in Canada and the other that looked at three bee species in the United Kingdom, Germany and Hungary — were the first large-scale investigations to test the popular agrochemicals influence on bees in real world settings.

The work also turns many preconceived notions about bees and pesticides on their heads.

While many studies had connected neonicotinoids — a common class of insecticides derived from nicotine — to bee deaths in the past, few studies had examined how much pesticide is needed to harm bees or how long the exposure must take. Critics argued previous scientific studies used unrealistic quantities of pesticides in their experiments.

The new studies say the environmental levels of neonicotinoids surrounding farms do not obliterate bee colonies outright, but instead kill them over extended periods of time. The pesticides also threaten bee queens in particular — which means colonies have lower reproductive rates.

The new studies say neonicotinoids do not obliterate bee colonies outright, but instead kill them over extended periods of time. The pesticides also threaten bee queens in particular — which means colonies have lower reproductive rates.

“Neonicotinoids are not the only problem that bees face,” Dave Goulson, a biologist at the University of Sussex, who was not involved in either investigation, said. “But certainly both of these studies suggest very strongly that exposure to these pesticides is one of the factors causing bees to decline.”

Amro Zayed, a biologist at York University in Toronto, decided to measure agricultural chemical use near Canadian cornfields grown from neonicotinoid-treated seeds. While earlier studies had periodically tracked these chemicals at farms, Zayed’s team opted to study them over a full five-month growing season.

Neonicotinoids dissolve in water, and easily make their way into waterways via agricultural runoff, Zayed said. Flowers miles away from a farm can take up the chemicals, which seep into the stems, leaves, pollen and nectar. So Zayed’s team of researchers looked for the presence of the neonicotinoids on dead bees, forager bees, nurse bees, larvae, pollen and in nectar.

They found a combination of herbicides, fungicides and pesticides, including a handful of neonicotinoid chemicals. To their surprise, neonicotinoids were mostly detected on pollen from plants other than corn — willow trees, clovers and wildflowers — located near the crop fields.

Before, ecologists had thought bees were only exposed to the pesticides when near a treated, flowering crop, but Zayed’s study, published Thursday in Science, countered this mindset. The researchers also found the pesticides stuck around throughout the growing season. People had previously assumed the bees’ vulnerability to the pesticide lasted only as long as the crop was in bloom.

To peel apart what exactly happens to the bees, Zayed’s team carried its field measurements over to an outdoor lab — far away from the fields. Over a period of 12 weeks, researchers exposed bees to clothianidin — the most common neonicotinoid found at the Canadian farms — but at the same levels encountered near farms. Their experiment took a conservative approach: Each round of exposure had smaller and smaller amounts of pesticide — akin to what you might expect in nature as rain washes away the compound. 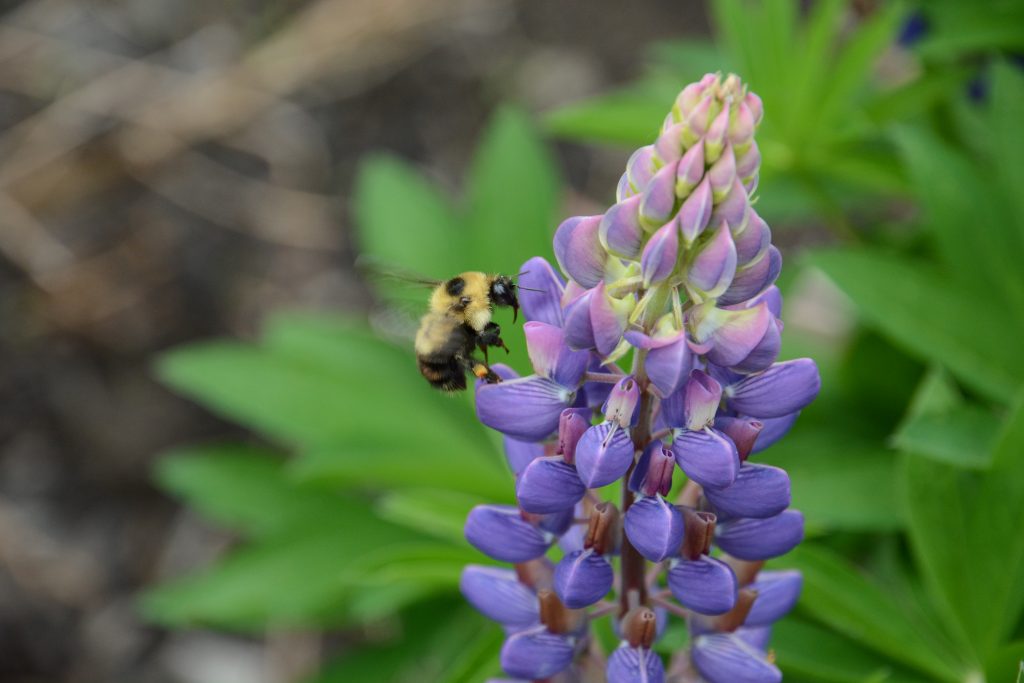 The pesticides not only reduced a bee’s chance of survival, but impaired its natural defense systems. While humans rely on vaccines or antibiotics, bees use social immunity, a tactic bees use to clean out dead or sick brood insects from the nest. Bees in colonies treated with clothianidin displayed less and less of this behavior over time, which means more sick bees were infecting, and staying in, the nests.

The researchers had noticed a similar trend in the cornfields the year before. By the end of the growing season, the bee hives near the fields performed this cleansing significantly less often than colonies far away from the fields.

Bad news for the queens

A lack of hygiene wasn’t the worst of it. The tainted hives tended to lose their queen and then struggled to find a new one. A queen sustains the colony, so without her, there are no eggs or future bees.

Remember those other chemicals — the herbicides and fungicides — the Canadian study found in the fields? Other labs had shown that fungicides make neonicotinoids more toxic, so Zayad’s team tested them, too. Neither the most common herbicide (linuron) nor the most common fungicide (boscalid) affected worker bee mortality on their own. But when the bees were exposed to the fungicide in combination with the neonicotinoid clothianidin, it took half as much of the chemicals to kill as many bees. The same applied if clothianidin was swapped with another neonicotinoid, thiamethoxam.

The second study, also published Thursday in Science, backed this idea. It evaluated how combinations of pesticides, fungicides and fertilizers in oilseed rape fields affected bee survival from one year to the next in the United Kingdom, Germany and Hungary.

Neonicotinoid exposure led to fewer bumblebee queens and lower reproductive success in all three countries. Neonicotinoids also reduced the next year’s honey bee colonies in Hungary and the U.K., but not Germany. This contrast suggests multiple factors — like regional climate and previous use of neonicotinoids — influence where the pesticides can harm bees.

Christian Krupke, an entomologist at Purdue University who was not involved in either study, highlighted the value of performing such work in Canada, which has strategies in place to mitigate bee exposure to neonicotinoids.

“But, there are important follow up questions. What is the next step? What can we do in terms of mitigation?” Krupke said. “That’s where the conversation should be. Frankly, it’s overdue.”

Left: The typical levels of neonicotinoids found in agricultural areas kill bees and hurt their ability to reproduce, according to the first, large-scale studies on the issue. Photo by viktor2013/via Adobe