“I think the solar system saved the best for last.”

That’s how project leader Alan Stern described the latest revelations from NASA’s New Horizons mission to Pluto. The press conference included a smorgasbord of fresh discoveries from the probe’s recent flyby of our distant celestial neighbor. Here’s a glimpse.

1. Nepal gets its first planetary landmark in the solar system

Pluto’s icy mountains, which were reported Wednesday, have been named “Norgay Montes” in honor of Tenzing Norgay, the Nepalese sherpa who guided Edmund Hillary on the first successful ascent of Mount Everest in 1953. Some peaks in the Norgay Montes are as tall as those in the Rocky Mountains.

“He is the first Nepalese to have a name on any planet in the solar system,” said New Horizons co-investigator Jeff Moore of NASA Ames research center.

The team also released a flyby animation of the mountain ranges, which are made from water ice, and a peek at a set of frozen plains located to the north, which have been dubbed Sputnik Planum after USSR’s first space probe.

Animated flyby of Pluto’s Norgay Montes and nearby plains, Sputnik Planum. “The flyover is made as if your eye was 25 miles over Pluto,” Stern said, with a total width of 200 miles across.

2. Pluto has lost a mountain of gas since its birth.

Think you feel gassy after a bowl of beans? Just try being a dwarf planet at the edge of the solar system. After examining preliminary data on Pluto’s atmosphere, the team has surmised that the planet is losing gas at a rate of 500 tons per hour. The result is a nitrogen-packed tail that flows away from the sun.

“The highest altitudes are nitrogen. Lower down is methane. Even lower down is heavy hydrocarbons,” said New Horizons co-investigator Randy Gladstone of the Southwest Research Institute.

But much of the planet’s outermost layer of nitrogen is escaping, based on the latest observations. As it does so, the gas forms a tail that wisps away into space.

“We suspect that it’s escaping because of the weaker gravity of Pluto,” said New Horizons co-investigator Fran Bagenal of the University of Colorado, Boulder. “What we think is happening is the solar wind coming from the sun — the protons and electrons and charged particles that are streaming out at supersonic speeds — will eventually crash into and interact with this escaping atmosphere.” 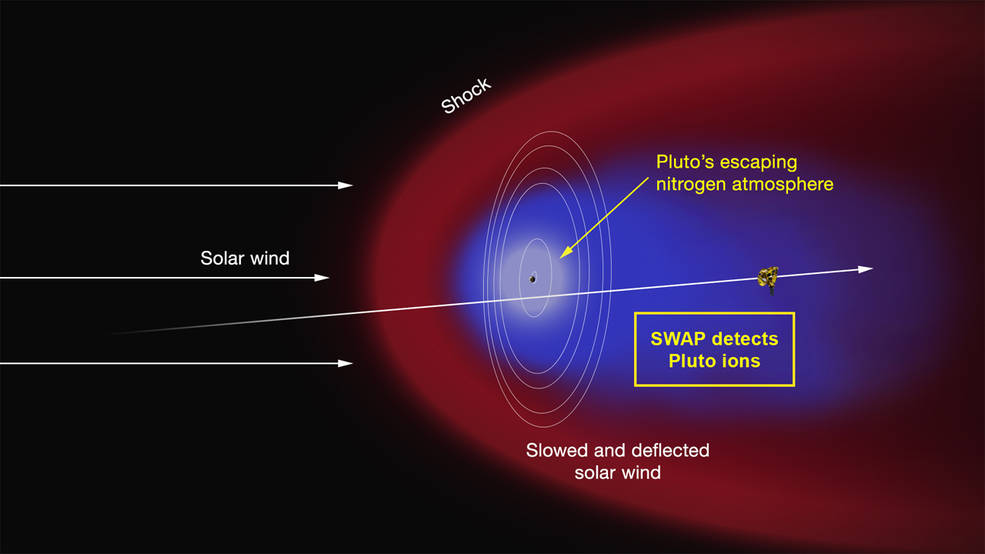 She continued that the atmospheric particles get entrained in the solar wind and carried away.

The nitrogen likely started as frozen ice on the surface of the planet that evaporated. If this process has been happening since Pluto’s birth about 4.5 billion years ago, the scientists estimate the planet has lost about 1,000 to 9,000 feet of nitrogen ice over the course of its lifespan.

“That’s a substantial mountain of nitrogen ice that’s been removed through evaporation and escape into the atmosphere,” Bagenal said.

“You can see the peak on the western side of the heart. We don’t know the source yet. Across the rest of the disc, there’s no other carbon monoxide concentration like this,” Stern said.

4. Pluto’s plains are like a bowl of hot oatmeal

“Pluto’s had a complex geological history. The landscape is just astoundingly amazing,” Moore said. Some parts of Pluto’s crust seem fractured, as if broken by the kind of tectonics that build mountains on Earth. Other regions are covered in craters, making those areas ancient and possibly several million years old.

Then there is Sputnik Planum, a set of icy plains located in Tombaugh Regio, just north of the Norgay Montes. 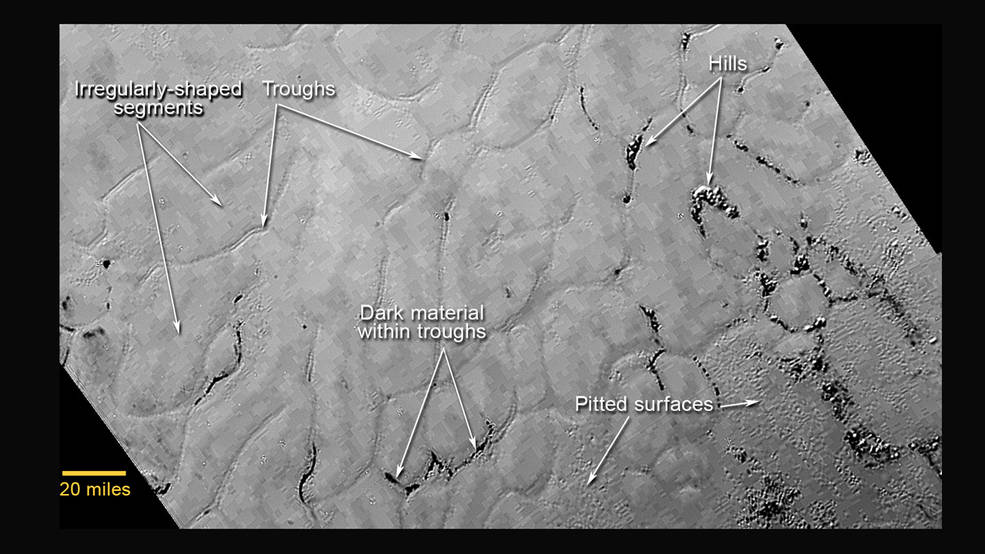 Landmarks of Sputnik Planum, a set of icy plains on Pluto. Photo by NASA/APL/SwRI

“It’s clear that Sputnik Planum isn’t more than 100 million years. But it’s possibly still being shaped by geological forces, so it could be a week old as far as we know,” said Moore. The plains are marked by pear-shaped flat spots — 12-20 miles across — that are bordered by troughs or divots in the ground. Some troughs carry an unidentified dark material that may have collected or erupted from Pluto’s depths. Other areas are dotted by hills, while some pockets of the landscape are covered by pits.

“We suspect that the hills were pushed up from the cracks. Or another hypothesis is they’re erosion-resistant knobs that are standing out as the surface is being massively eroded or lowered,” said Moore.

Sputnik Planum’s many features may have been created by a process called convection, wherein Pluto’s frozen surface of methane, carbon monoxide and nitrogen were warped and driven up by the modest heat from the planet’s interior.

“Similar to what you see on the surface of a boiling pot of oatmeal or the blobs in lava lamp. Alternatively, they could be mud cracks created by tension in the surface material. We have various ways to test those ideas,” said Moore.

The team noted black spots that resembled gas plumes being blown by wind in the northern reaches of Sputnik Planum, hinting at the existence of geysers on Pluto. 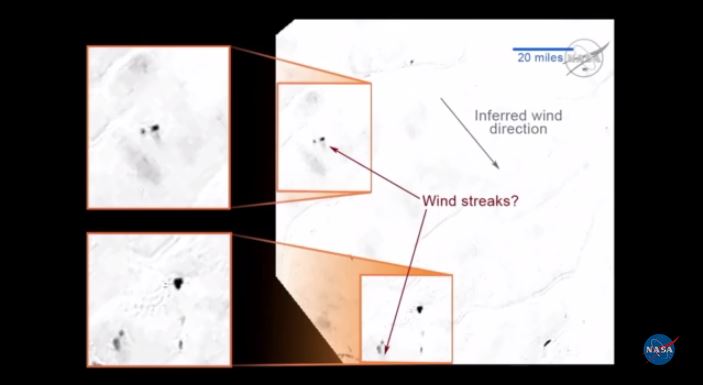 Preliminary evidence of gas plumes on Pluto suggest the existence of geysers. Photo by NASA/APL/SwRI

Left: Pluto's heart is filled with frozen carbon monoxide. The location of the frozen gas is marked by the blue outline. Photo by NASA/APL/SwRI