Portrait of a dyslexic artist, who transforms neurons into ‘butterflies’

Rebecca Kamen’s sculptures appear as delicate as the brain itself. Thin, green branches stretch from a colorful mass of vein-like filaments. The branches, made from pieces of translucent mylar and stained with diluted acrylic paint, are so delicate that they sway slightly when mounted to the wall. Perched on various parts of the sculpture are mylar butterflies, whose wings also move, as if fluttering. 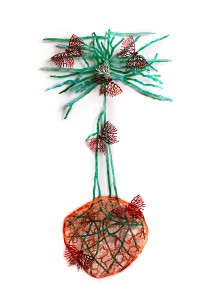 One of Kamen’s artistic influences is the writing of Santiago Ramon y Cajal, who is called the “father of modern neuroscience.”

The work, called “Butterflies of the Soul” was inspired by neuroscientist Santiago Ramon y Cajal, who won the 1906 Nobel Prize, for his groundbreaking work on the human nervous system. Kamen’s sculpture is a nod to his work and the development of modern neuroscience. Cajal’s observation of the cells under the microscope radically changed how scientists study the brain and its functions, Kamen said. And the butterflies in her sculpture represent Cajal’s drawings of Purkinje cells, which are found in the cerebellar cortex at the base of the brain.

Purkinje cells play an important role in motor control and in certain cognitive functions, such as attention and language. And attention and language are skills of great interest to Kamen, who has dyslexia. Her fascination with the brain and its structure deepened when she discovered that she was dyslexic later in life.

A neurological disorder, dyslexia is primarily characterized as an unexpected difficulty learning to read despite intelligence, motivation and education, according to Sally Shaywitz, author of “Overcoming Dyslexia” and co-director of the Yale Center for the Dyslexia and Creativity.

Images of the brain in action, fMRIs, have shown researchers that key parts of the brain do not function the same for dyslexic and non-dyslexic people. Dr. Bennett Shaywitz, Sally Shaywitz’ husband and co-director at Yale Center for Dyslexia and Creativity, describes one of those areas as the “word form area,” which is used like a mixing bowl for comprehension and translating words and letters into language. That region, located in the brain’s occipital temporal lobe, just above the cerebellum, is disrupted in the brains of dyslexic people, which makes it more difficult for them to read. Their brains struggle to decode written words or symbols into spoken language.

“It’s a difficulty getting to the underlying sounds of language,” he said.

Kamen grew up before doctors diagnosed children or adults with dyslexia, but the struggles the Shaywitz’s describe align closely with her memories of school.

“I would read and read and read — and my parents read to my sister and I — and I couldn’t remember what I was reading. I just thought, ‘Well maybe that is how people read.’” Completing basic math, such as memorizing multiplication tables, was also a challenge.

Despite the support of her parents and many of her high school teachers, some educators even questioned Kamen’s intelligence. “When I first entered college, the counselor asked my parents why they were wasting their money sending me to college,” Kamen said. “In his estimation, I wasn’t college material.”

While it is still possible to learn to read, Sally Shaywitz says the symptoms of dyslexia never disappear. It is a chronic, persistent challenge. Those with dyslexia can learn to read accurately, but the ability to read fluently — rapidly and automatically with good comprehension — may always escape them, she says.

“Interventions can close that fluency gap somewhat, but I am not aware of any evidence of it being closed entirely in people who are dyslexic,” Sally Shaywitz said. For dyslexic people, reading remains a manual, intentional task for the brain that requires a lot of attention and effort. 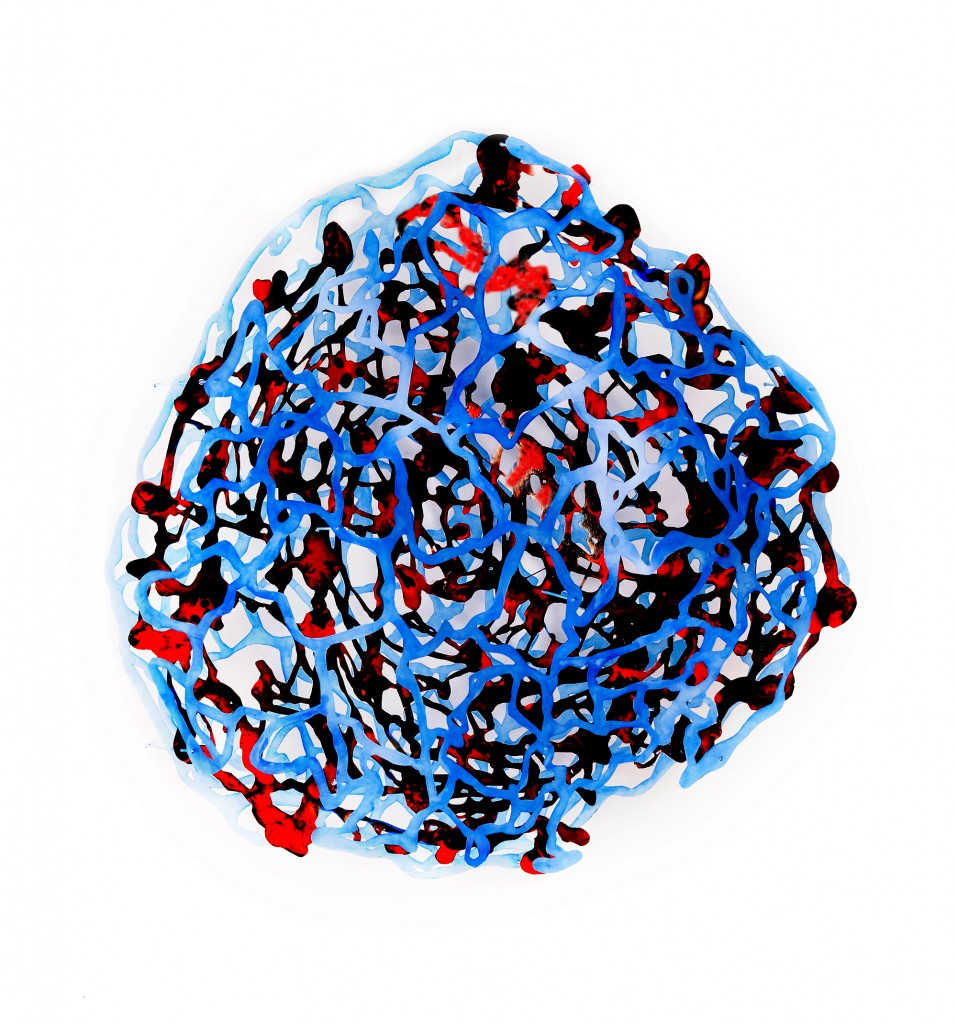 Those persistent struggles were what influenced Kamen to study art in the first place. Admitted to college on probation, Kamen chose to study art education, because it was the only major she could find at Pennsylvania State University that didn’t require a math course.

The fluency gap poses less of an obstacle for Kamen now, whose profession allows her to avoid reading long texts or taking notes. The process of creating artwork has depended more on her haptic skills, or skills that rely on the sense of touch to perceive and remember objects.

“I learned about things by taking things apart, examining them,” Kamen said. “I think that enabled me to develop the skills of working with my hands more than just processing things in a more linear way.” 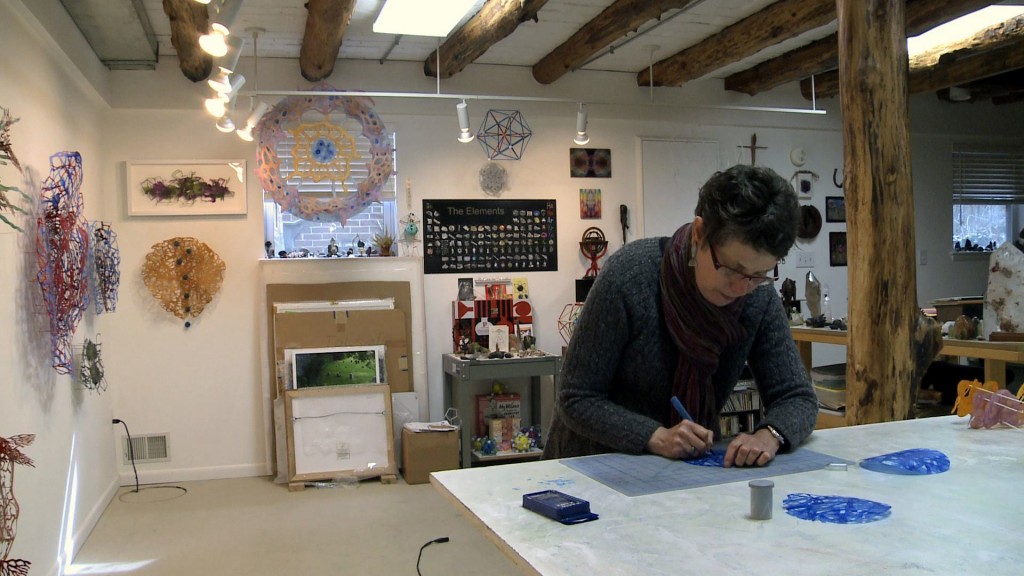 In the studio of Kamen’s McLean, Va., home, she has cups full of paint brushes, jars of acrylic paint, old film canisters filled with used knife blades and sheets upon sheets of translucent mylar, ready to be transformed into abstract sculptures.

For most of her career, science has been a muse for Kamen, because she believes the artist and the scientist have similar missions. They both search for meaningful patterns, create compelling narratives and deal with invisible worlds, she says. She tries to reflect these similarities in her sculptures. For example, Kamen chooses to the stain mylar, the primary material for her sculptures, rather than paint it, because she wants to mimic how scientists make observations about the brain. “They will cut a very thin slice of brain matter, in the case of a neuroscientist, and then they will introduce a stain to it,” Kamen said, in order to see finer details under a microscope. 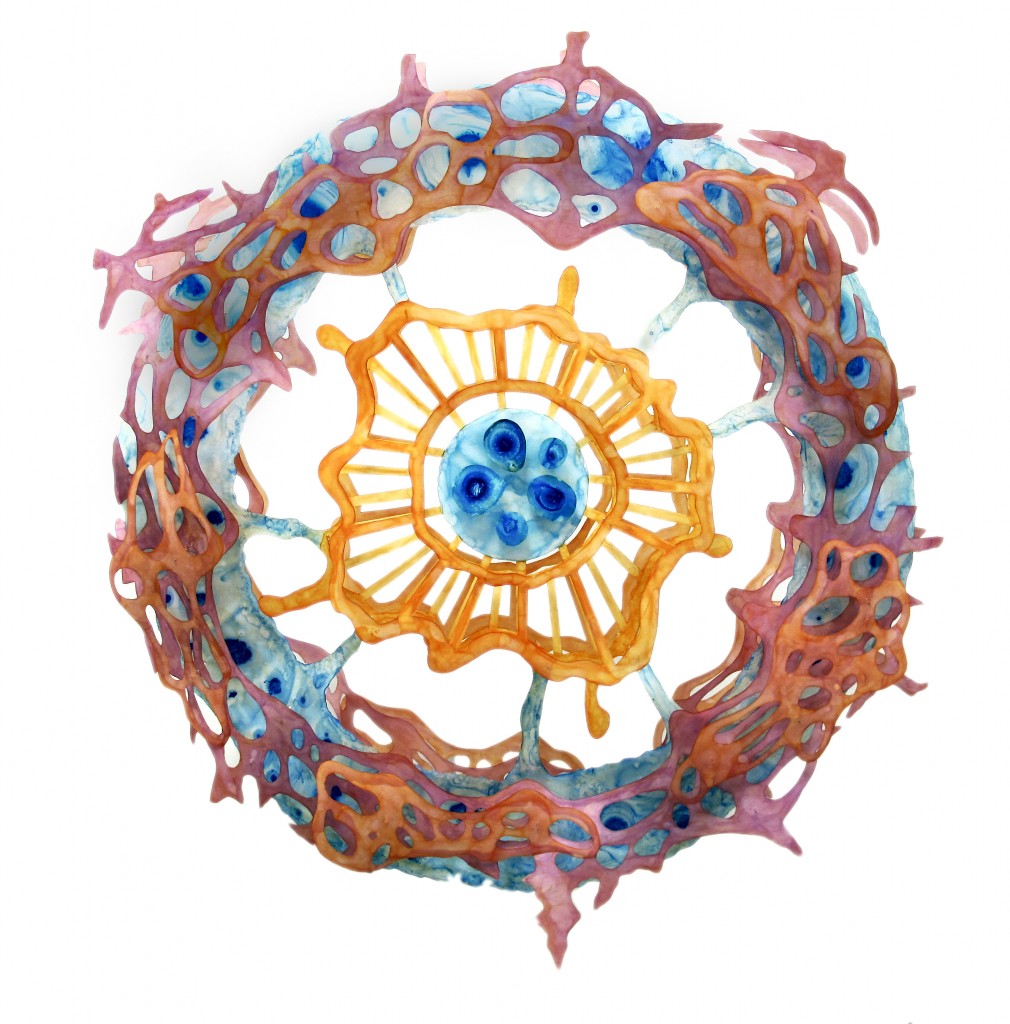 What Kamen wants to reveal to viewers of her artwork is the sometimes hidden beauty of science.

“Why would someone spend 25 years of their life researching something so small that we couldn’t see?” Kamen asked rhetorically. “It’s that sense of discovery, of seeing something so beautiful that it is almost like a siren. It keeps pulling you to want to investigate it further.”

In an earlier sculpture, Kamen took the periodic table, the “rigid gridded chart, that we glared at in high school,” and turned it into an elemental garden. Kamen constructed a 3-dimensional mylar flower for each of the 83 naturally occurring elements, in which the orbitals of the elements are reflected in the details of the petals. The atom flowers were arranged in a Fibonnaci-like spiral. 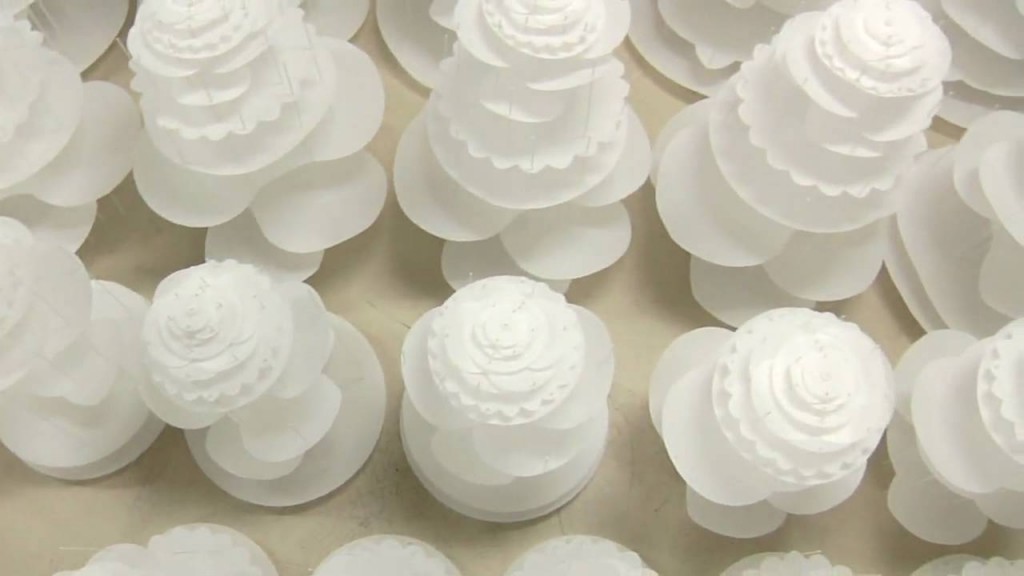 Kamen describes her piece, “Divining Nature: An Elemental Garden” as a transformation of “chemistry’s Periodic Table of letters and numbers into a garden of sculptural elements based on geometry and atomic number.” Art by Rebecca Kamen

In another of Kamen’s neuroscience-inspired sculptures, which will be displayed in the new John Edward Porter Neuroscience Research Center at the National Institutes of Health, Kamen designed and built a sculpture — “Growth Cone” — which was inspired by research of an NIH scientist, Justin Taraska, who captures the 3-D images previously unknown protein structures at the nanoscale in order to better understand its functions and regulations. 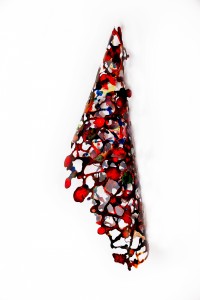 When Kamen was awarded an NIH fellowship in 2012, she received unprecedented access to scientists’ labs on the Bethesda, Md., campus for three months. After her summer at NIH and more than 24 interviews with neuroscientists, she transformed her acquired knowledge of basic research on the brain into artwork, which is now on display at the Porter Neuroscience Research Center.

Kamen’s artistic talents fit a profile of great interest to Matthew Schneps, an astronomer at the Harvard-Smithsonian Center for Astrophysics. Schneps has conducted a study on another aspect of dyslexia: the abilities that can be attributed to the neurological condition.

He and his team at the Laboratory for Visual Learning theorize that there are neurological reasons why dyslexic people may be predisposed to certain tasks or professions, such as science or art. In a study he conducted comparing dyslexic and non-dyslexic astrophysicists, those with dyslexia were able to identify patterns in wave spectrums that signaled the presence of a black hole in a faraway galaxy faster than their non-dyslexic counterparts. Schneps believes his research suggests that dyslexia may be associated with enhanced abilities for certain types of visual processing.

Catya von Karolyi, a professor at University of Wisconsin, Eau Claire, tested how quickly people could distinguish an “impossible” figure — a shape or form that could not exist in the real world and found that people with dyslexia were faster at identifying the impossible scenarios. Her research suggests that dyslexic people have better visual-spatial abilities to integrate the parts of the drawing into a whole.

Despite decades of data from longitudinal studies proving the deficits that dyslexic people encounter, efforts to focus on the strengths of those with dyslexia, rather than the weaknesses, have become more popular of late. Books, such as Drs. Brock and Fernette Eide’s “The Dyslexic Advantage,” argue dyslexic people have, as the title would suggest, cognitive strengths that other people do not have.

Schneps, who is dyslexic, thinks that finding neurological or cognitive evidence of these strengths could change how treatments are designed and implemented, as well as improve the confidence of dyslexic people.

“A lot of people with dyslexia have tremendous self-doubt,” he said. “They think they are stupid and they constantly question if the things they do are valuable.”

Because traditional learning methods, such as reading long texts and rote memorization of multiplication tables, were extremely difficult for her, Kamen relied on ways of learning in which she believes she was more naturally capable or predisposed. 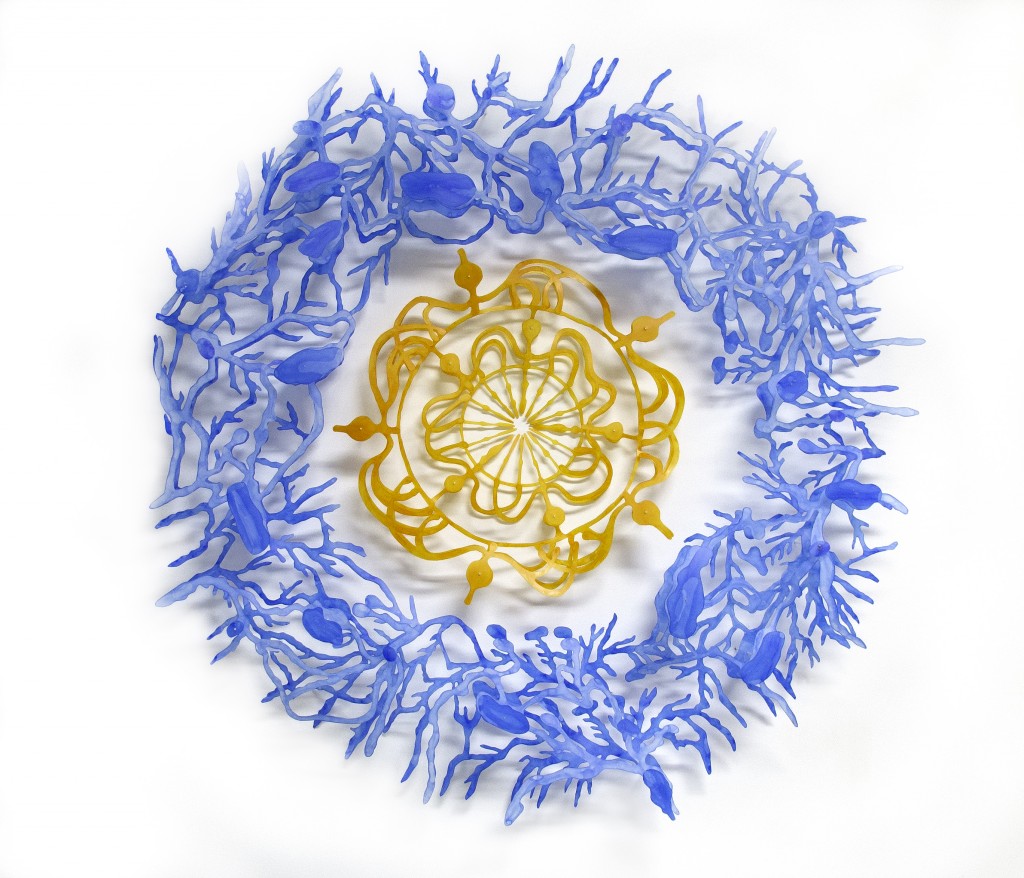 People with dyslexia, Kamen said, understand things in relationship to other things, “which in retrospect, is such an incredible gift,” Kamen explained.

Sally Shaywitz cautions that placing too much focus on the strengths of people with dyslexia could diminish the challenges and prevent more young people from getting the help and accommodations in school that they need.

“It is not being diagnosed in schools,” she said. “The kids who have (dyslexia) aren’t receiving the evidence-based interventions and accommodations that will allow them to show their strengths … and reflect (their) ability rather than their disability.”

As for Kamen, who still struggles with certain tasks because of her dyslexia, she says she has learned how to manage those challenges through her artwork. “I embraced the fact that what appears as a learning obstacle seems to have contributed a great deal to how I navigate and experience the world,” she said.

“The Measure of All Things” by Rebecca Kamen

Several of Rebecca Kamen’s neuroscience-inspired sculptures are currently on display in the Porter Neuroscience Research Center on the NIH campus in Bethesda, Md., which is open to the public, for free. Learn more about how you can visit the National Institutes of Health.

Left: After completing a fellowship at the National Institutes of Health, artist Rebecca Kamen has transformed her discussions with neuroscientists into abstract sculptures, such as this close-up view of "Butterflies of the Soul." Image courtesy of Rebecca Kamen