Why don’t we ever see the far side of the moon?

NASA this week released photographs of the far side of the moon, providing a lunar perspective we rarely get to see. The images were snapped by the Deep Space Climate Observatory satellite, positioned between the sun and the moon with the Earth as its backdrop.

But why is the dark side of the moon, as it’s known, so elusive to the Earthbound?

First, the dark side isn’t really any darker than the near side. Like Earth, it gets plenty of sunlight.

We don’t see the far side because “the moon is tidally locked to the Earth,” said John Keller, deputy project scientist for NASA’s Lunar Reconnaissance Orbiter project. “The moon does rotate, but it rotates at the same speed that it rotates around the Earth.” The moon completes one full rotation on its axis in the time it takes to orbit the Earth. That means the same side is always turned toward us.

Much like a race car drifts when it turns on the curved portions of an oval racetrack, the moon does have a tendency to want to spin faster. Earth’s gravitational pull holds it in place. 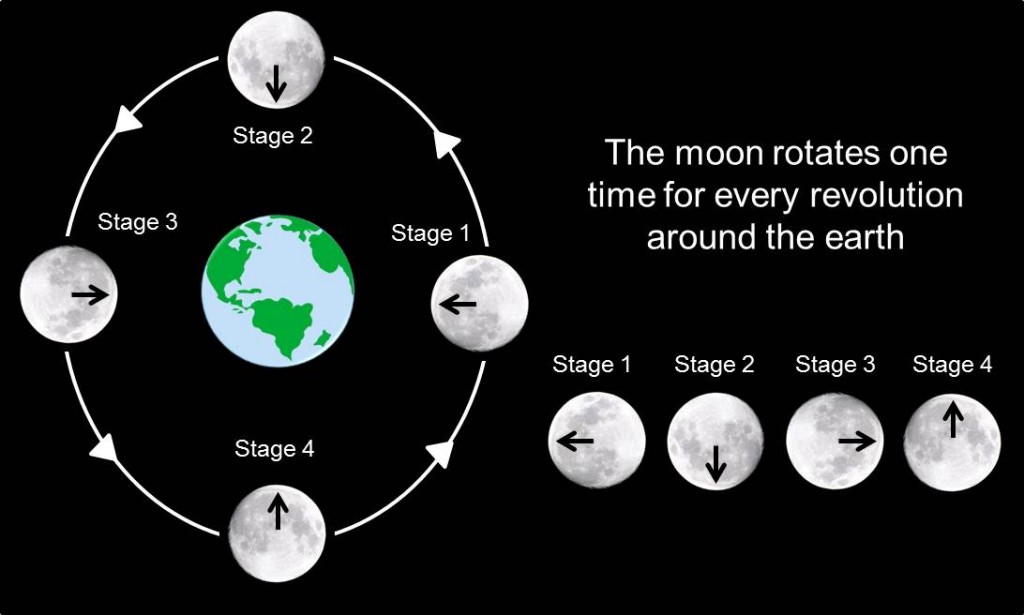 The moon’s shape is key to keeping it in sync with the Earth. Long ago, scientists believe, the moon had its own spin. Over time, frictional forces, including gravity, helped mold the moon into the shape it is now — spherical, but not a perfect sphere.

Gravity exists as a gradient. If the moon were a perfect sphere, then the gravity felt on the far side and the near side (or Earth’s side), would cancel each other out.

But because it isn’t a perfect sphere, as it turns, a smaller portion of the moon moves in toward Earth and a larger portion moves away. This uneven distribution in gravity causes a torque, or a rotational force, making the moon spring back into place. The spring-like motion is referred to as lunar libration.

The first images of the far side of the moon were taken in 1959 by the Soviet Luna 3 Spacecraft. Since then, missions like the Lunar Reconnaissance Orbiter have been able to tell us much more about the side we never see – and the far side doesn’t look anything like the near side.

Scientists believe the moon was molten, or hot liquid when it first formed, and then it cooled. But the dark side cooled first, making it older with more craters, Keller said. Though they don’t know why, the near side also has more radiation than the far side, perhaps contributing to why the near side didn’t cool as fast.

“For one reason or another, one side was favored over the other,” Keller said.