New link between Zika virus and microcephaly is found in Brazil

Editor’s note: This report is part of a special series with Katie Worth, who is embedded in Brazil, and our partners at PBS Frontline/WGBH.

RECIFE, Brazil — Researchers in the state of Pernambuco, home to a third of Brazil’s suspected cases of infant microcephaly, said on Wednesday that they have identified some of the clearest evidence yet of a direct link between the debilitating birth defect and the Zika virus.

Researchers here tested the spinal fluid of 12 babies with microcephaly, all of whom were born to mothers who reported having symptoms of Zika early in their pregnancies. In all 12 cases, the researchers found evidence of Zika — results they described as stunning.

“I was so surprised,” said Marli Tenório, an infectious disease expert at the Aggeu Magalhães Research Center. “Everybody wants to say, ‘It’s not Zika, it’s not Zika.’ I saw this and thought, ‘Wow, it’s Zika!’”

In a press conference at the Pernambuco Health Department, Secretary of Vigilance and Health Luciana Albuquerque cautioned that “this is not a scientific study,” noting that the results do not indicate a definitive causal link. “But it’s a very important suggestion of the link,” she said.

As the Zika virus has spread to more than 20 countries in the Americas, researchers in Brazil have been on the hunt for the cause of the recent wave of microcephaly, a birth defect in which babies are born with small heads, underdeveloped brains and the prospect of lifelong developmental delays. Health officials in Pernambuco say that until last year, the state saw no more than a dozen microcephaly cases annually. But beginning in late August, babies in Pernambuco began displaying symptoms by the dozens, and then by the hundreds.

As of Wednesday, Brazil’s health authorities had logged 4,783 cases of suspected microcephaly since the outbreak began. The majority of those are likely false positives: All babies with a head circumference of less than 32 centimeters are flagged as a suspected case, but many are born with small heads for other reasons. Of the 1,313 cases the government has investigated so far, 404 were confirmed to have microcephaly. The diagnosis was rejected in the remaining cases.

Still, even the confirmed figures represent a surge in the incidence of microcephaly over prior years, particularly in northeastern Brazil where most cases have been concentrated.

“We used to have 10 cases a year in Pernambuco. Then in August we started having 10 cases a week,” said Dr. Angela Rocha, a pediatric infectious disease specialist at Recife’s largest public hospital. 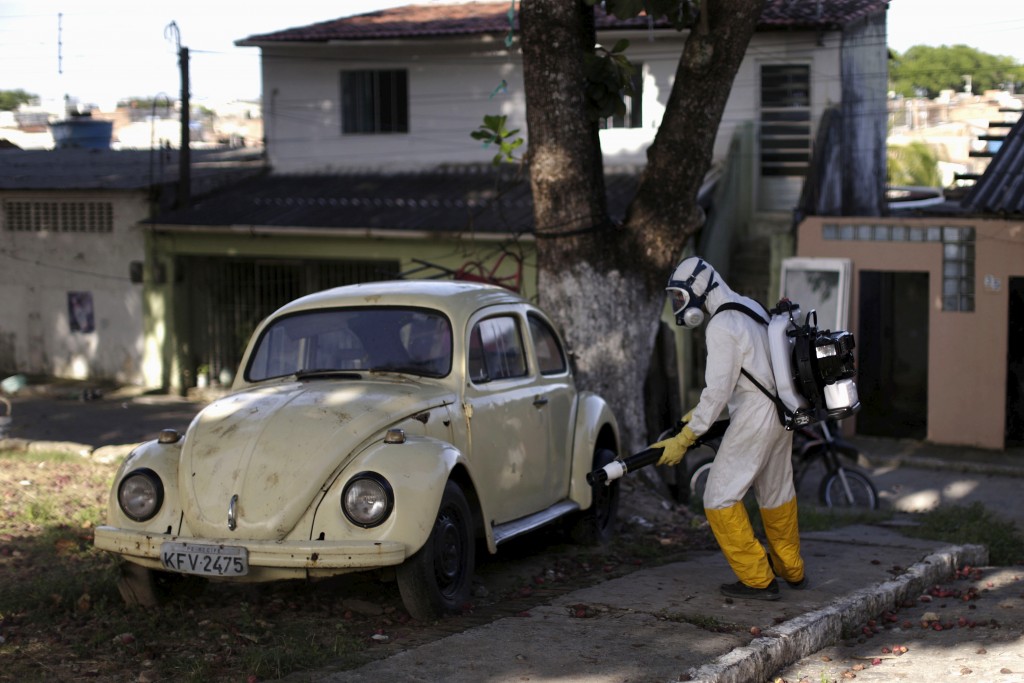 A municipal worker sprays insecticide at the neighborhood of Afogados in Recife, Brazil, February 2, 2016. The operation is part of the city’s effort to prevent the spread of Zika’s vector, the Aedes aegypti mosquito, according to a statement from Municipal Health Secretary. Photo by Ueslei Marcelino/Reuters

In October, health officials began investigating whether the precipitous rise in microcephaly was linked to a mysterious outbreak of Zika in Brazil. The mosquito-borne disease had been floating around Africa and Asia for decades, but it attracted little attention from health officials because its obvious symptoms were relatively benign and easily confused with other illnesses. In symptomatic cases, Zika can lead to a rash, a headache, red eyes, swollen joints and a light fever. Others contract the disease but never display symptoms. Zika’s mosquito-born cousins, dengue and chikungunya, are both far more debilitating and painful.

Zika is believed to have arrived in Brazil in late 2014, but it did so with such little fanfare that health officials here didn’t confirm its presence until May 2015. By then, it is thought to have infected at least tens of thousands of people. Those figures are only estimates, though, since health officials hadn’t collected data about it. In Pernambuco, for example, the reported Zika infections had been lumped in with reported dengue figures.

The outbreak took on a new urgency in October, when researchers began to wonder whether Zika may be behind the rise in suspected microcephaly cases. But definitive evidence of a link has been elusive.

The earliest indication came when microcephaly began to appear in the same areas where Zika had landed months earlier. Brazilian researchers later found traces of the virus in the amniotic fluid and the brain tissue of a small number of microcephaly babies. The Centers for Disease Control and Prevention also found Zika virus in the brains of two deceased newborns with the condition, as well as in the placentas of two women who had miscarriages.

In search of better evidence, Tenório and several colleagues flew to Belém in January to meet with officials from the CDC. The agency had developed a test that could determine if a baby had been infected with the Zika virus by looking for a specific antibody in the baby’s cerebral-spinal fluid. This is not a new method of testing, but it was being newly applied to Zika. The test is not yet commercially available, but the CDC explained the methodology to Tenório and her colleagues, and upon their return, they tested samples of 12 babies whose spinal fluid had been collected shortly after birth. They all tested positive.

This test works better than others because it is looking for an antibody called immunoglobulin M, the largest antibody humans produce. It is too large to pass from mother to child, so researchers can be confident that it is an antibody produced by the baby — and can therefore infer that the baby was infected with Zika while en utero.

Its presence in the cerebrospinal fluid is key for two additional reasons, Tenório said. It indicates the virus is making its way into the nervous system, and the baby’s immune system is battling it there. And second, while immunoglobulin M disappears from the blood stream within weeks of an infection, it remains present in the cerebrospinal fluid for months or longer. This means the antibody can be detected at birth.

While her colleagues are launching a controlled study to further investigate the Zika-microcephaly link in babies, Tenório is using the CDC test for 28 more infants with suspected or confirmed microcephaly. She said she hopes to have the results by Friday, before most work in Brazil stops for the national Carnival celebrations.