Exotic particles can be incredibly ephemeral, sticking around for tiny fractions of a second before decaying. The recent discovery of a new type of particle called a tetraquark may turn out to be equally short-lived, according to a new study casting doubt on the finding, although the issue is not yet settled.

The new tetraquark—an arrangement of four quarks, the fundamental particles that build up the protons and neutrons inside atoms—was first announced in late February by physicists at the DZero experiment at the Tevatron collider at the Fermi National Accelerator Laboratory (Fermilab) in Illinois. The finding represented a surprising configuration of quarks of four different flavors that was not predicted and could help elucidate the maddeningly complex rules that govern quarks. But now scientists at the Large Hadron Collider (LHC)—the world’s largest particle accelerator, buried beneath Switzerland and France—say they have tried and failed to find confirming evidence for the particle in their own data.

“We don’t see any of these tetraquarks at all,” says Sheldon Stone, a Syracuse University physicist who led the analysis for the LHCb experiment. “We contradict their result.”

DZero team leaders, however, say they are standing by their discovery, which showed up in archived data, at least until they see more fleshed-out data from LHCb. “They don’t have any written documents yet, just slides,” says Dmitri Denisov, co-spokesperson for the DZero experiment. “So it might be correct, it might not. Let’s wait for more information.” The Tevatron was retired in 2011. 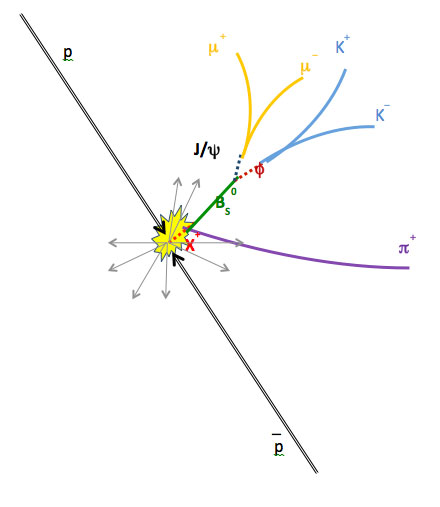 The potential new “tetraquark” particle, made of four quarks, decays into two mesons, or pairings of two quarks, which then decay into other daughter particles.
Photo by Fermilab

If the new tetraquark exists, it should theoretically show up in droves at the LHC, and possibly in lesser numbers at other colliders as well. DZero’s discovery came not from seeing the new tetraquark, dubbed X(5568), directly, but rather by inferring its existence after seeing pairs of particles thought to be produced by its decay. Those particles, pions and Bs mesons (both consisting of pairs of quarks and antiquarks), are even more plentiful at the LHCb experiment than they were at DZero, and so the thinking goes, if the X(5568) tetraquark exists, it should be plainly evident there. But because each collider and experiment works differently and has unique sensitivities, it is possible that DZero was better suited to detect it.

“It’s too early to say if LHCb is at all capable of seeing this object,” Denisov says.

“I think the LHCb sensitivity is much better [than DZero’s] so I would tend to doubt that this [tetraquark] result is real,” says Tom Browder of the University of Hawaii, a member of the Belle collider experiment in Japan. “It’s likely to be a statistical fluctuation. You might be able to supply a conspiracy theory where it’s only produced at the Tevatron and not at the LHC, but I think that’s contrived.” Although Belle found the first known tetraquark in 2003, it likely does not have the ability to spot X(5568), Browder says.

Scientists at the Tevatron’s other experiment, CDF (which stands for the Collider Detector at Fermilab), are dusting off their own data now to look for the particle, but have not yet confirmed that they have the sensitivity required to find it.

“Could we see such a thing? In principle, yes,” says Fermilab scientist and CDF member Jonathan Lewis. “But it’s a detailed question. I can’t make a definitive statement as to whether we can rule it in or out.”

He also found the LHCb results potentially telling. “That’s certainly a strong bit of contrary evidence that people need to consider,” Lewis says. “I would wait and see. We’re doing our work and I’ll leave it to other people to judge the sum total.”

Either way, scientists do expect more tetraquark particles and other new arrangements of quarks to show up in coming years as accelerators become more and more powerful. The roughly half dozen tetraquarks that are now known may just be the tip of the iceberg. And the more we learn about all the different possible arrangements of quarks, the better scientists hope to understand the complex laws, called quantum chromodynamics, that govern them. These rules currently explain numerous facets of quark behavior, but the theory’s equations are too complex to solve many kinds of problems. Determining whether X(5568) exists is the first step toward progress.

“Either way it will help science to know more,” Denisov says. “This case is especially difficult because theoretically, it’s very poorly understood how this object is created and decays. This is science in action.”

This article is reproduced with permission from Scientific American. It was first published on March 23, 2016. Find the original story here.

Clara Moskowitz is Scientific American's senior editor covering space and physics. She has a bachelor's degree in astronomy and physics from Wesleyan University and a graduate degree in science journalism from the University of California, Santa Cruz.