We can now get up close and personal with corals, watching how they kiss and fight, thanks to a new high-tech microscope. Known as the Benthic Underwater Microscope, the device can be used by a single diver to film how coral adapts to environmental changes like global warming, according to a study published Tuesday in Nature Communications.

“Humanity puts a lot more effort into exploring space than exploring the ocean,” Tali Treibitz, marine engineer and co-author at the University of Haifa, told the NewsHour. “By developing these new technologies, we can explore new, unknown phenomena that we were never aware of.”

Scientists originally developed the system at the Scripps Institution of Oceanography in San Diego to film plankton, but then adapted it to monitor coral reef bleaching and algal overgrowth. More than 93 percent of the Great Barrier Reef has suffered coral bleaching, and a third of the reef has died from this condition. With coral reefs acting as homes to more than 25 percent of marine animals — and regrowth of a dead reef taking upwards of 100 years — monitoring these “ocean rainforests” is critical. 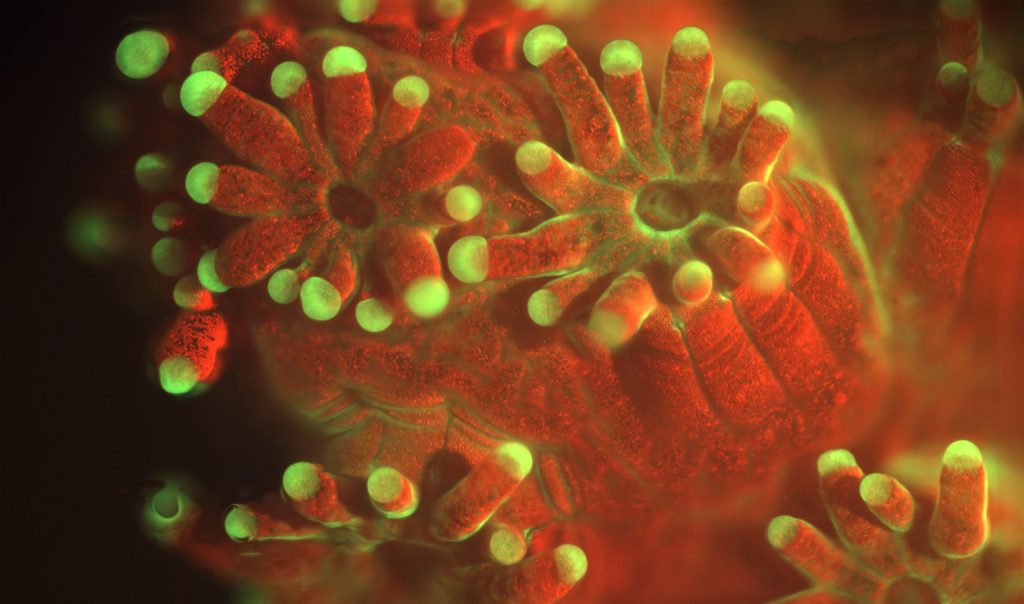 The microscope consists of a few key parts. A special ring of LEDs allows researchers to document coral under different types of light, from white to fluorescent. An electrically tunable lens, which works like the human eye, focuses on the coral without moving the microscope and potentially disturb crusty organisms. A long-range lens allows the microscope to stand a good distance from the coral to prevent harm, and a researcher can remotely control the filming a few feet away.

“As humans, we view the world in large scale,” co-author Andrew Mullen, an oceanographer at the Scripps Institution of Oceanography, told the NewsHour. “But there are a lot of important things that happen in small scale, like the interactions of the teeny polyps that make up these massive coral reefs.”

Researchers have only made two microscopes so far, but the devices have been lent to researchers around the world to keep tabs on the planet’s coral reefs and the ocean floor.

“We are not aware of the complicated systems that make up our oceans, how rich they truly are,” Treibitz said. “As instrument developers and scientists, we hope this system leads to not just better science, but also awareness of the ecosystem.”