Flooding during Hurricane Sandy damaged much of Jose Velez’s New York City home. Personal photos, comic books and his wife’s wedding dress were ruined. He worries that another storm will strike again.

Velez lives in the Rockaways, a beachside area on the far southern edge of the city that was hit hard by Sandy. Proximity to the water–their house sits 100 feet from the shoreline–makes his community vulnerable not only to major events like Sandy, but also to regular flooding.

Despite that, Velez hasn’t raised the height of his house under the city’s “Build It Back” program, which was created in 2013 after the hurricane. After Build It Back administrators lost his paperwork twice during the first year of the program, Velez said he stopped applying.

More than half of the 20,000 applicants have either dropped out of the Build It Back program or were determined ineligible, highlighting a city’s big debate over resiliency.

Resiliency, in engineering terms, is the ability of something to retain or return to its original state. But people in the Rockaways said they want better than life before the storm. That includes better access to transportation, health care and services like fire stations that can withstand an emergency. They also worry they won’t be able to afford to live in the neighborhoods that get improved.

“Here we are, five years later, and there are communities that feel they’re not being listened to at all,” Velez said. “If we wait five or six years for these projects, we could have a storm, maybe not a Sandy, but just another hurricane. And that’s what people are worried about.”

Velez serves on his local community board on the parks and public safety committee. It held hearings on rebuilding the Rockaways’ boardwalk, which provides a barrier against flooding. That project finished in May this year ahead of schedule and under budget, making it a success story in the Sandy recovery. New York Mayor Bill de Blasio

Residents in the Rockaways, however, are concerned about the area away from the boardwalk, namely the interior of the peninsula containing Jamaica Bay. 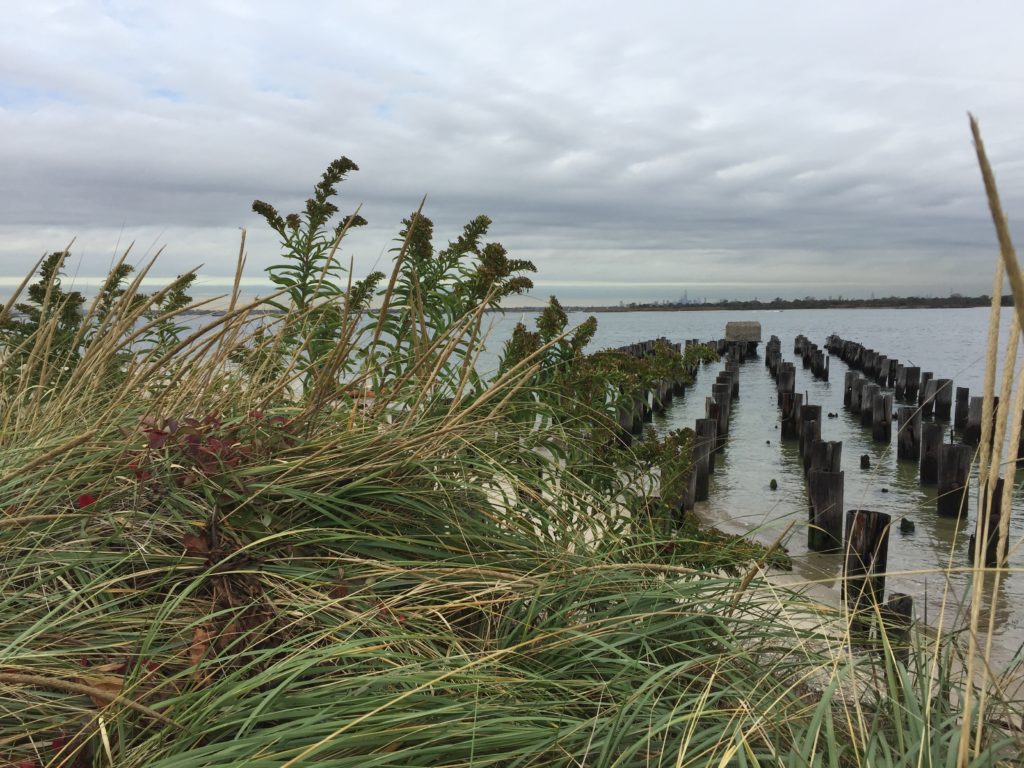 The entrance to Jamaica Bay on the western end of the Rockaways is a choke point for flood waters. The Army Corp of Engineers is developing a plan to build a deployable wall to mitigate risk. Photo by Andrew J. Bossone

The entrance to Jamaica Bay is on the western side of the Rockaways. The opening to the bay beneath the Marine Parkway Bridge is a mile wide, creating a bottleneck of water.

The city has dedicated funds for improving public housing damaged by Sandy, but some projects have stalled…

Once sea levels surge and waves rush in, it becomes difficult to reduce flooding inside the bay, according to Adam Parris, the executive director of the Science and Resilience Institute at Jamaica Bay. The Army Corps of Engineers is designing an underwater barrier that could be raised to stop flooding during a surge. Parris said that barrier could cost an estimated $4.5 billion.

“All options, including the barrier, are going to require quite a bit of funding and effort,” Parris said. “We’re trying to help the corps to look at options including narrowing the inlet with habitat restoration measures. And not just in the inlet, but the interior of the bay for the vision of marshland restoration.”

Jamaica Bay contains a wildlife refuge filled with marshlands, which can mitigate the risks of flooding. During Sandy, the refuge was overwhelmed by floodwaters and contained vegetation unsuited for saltwater. The refuge planted hundreds of plants at the end of October to restore the marshland’s natural barrier and sponge. 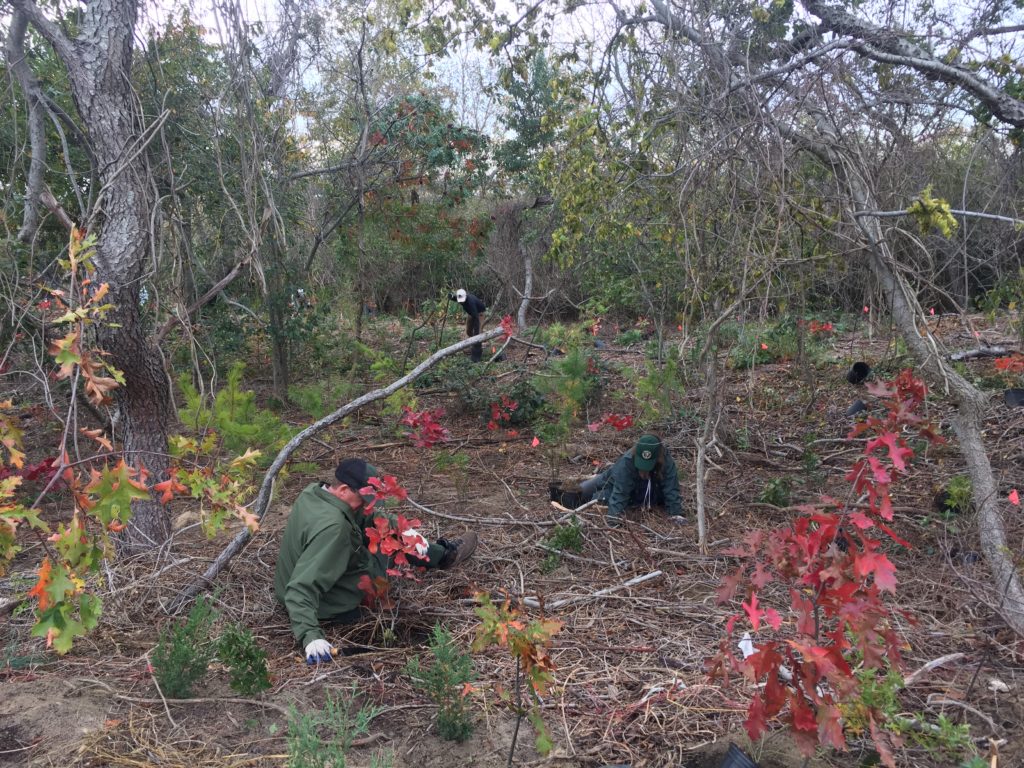 The Jamaica Bay Wildlife Refuge was damaged in Hurricane Sandy. A planting program in October aims to restore the refuge’s ability to withstand storms and act as a buffer for the city. Photo by Andrew J. Bossone

Engineers and urban planners are increasingly looking to natural protections against the effects of climate change. A major part of “The BIG U,” a proposal for a 10-mile perimeter in lower Manhattan, includes parks and vegetation.

“Nature is an often overlooked part of any urban system,” said Timon McPhearson, an associate professor of Urban Ecology at the New School. “One of the major successes [in New York’s recovery from Sandy] is thinking about how we invest in infrastructure. The city has taken the notion of nature as a source of solution for climate adaptation.”

“Will resources and development happen equitably across the [Rockaways] peninsula? Can the Rockaways become a more resilient, healthy, equitable and safe place to live?”

While McPhearson was optimistic about the city’s commitment to improving infrastructure, he remains concerned that vulnerable populations — including the poor, the elderly and people of color — will be disproportionately affected by climate change.

“Overall, people are thinking a lot about what it means to be a resilient community,” said Leigh Graham, an assistant professor in Urban Policy & Planning at John Jay College of Criminal Justice and in environmental psychology at the CUNY Graduate Center, who focuses on urban disaster recovery. “Will resources and development happen equitably across the [Rockaways] peninsula? Can the Rockaways become a more resilient, healthy, equitable and safe place to live?”

The city has dedicated funds for improving public housing damaged by Sandy, but some projects have stalled, like repairs to the Red Hook Houses in Brooklyn that are starting now, five years after Sandy. Delays, along with attention paid to projects like The BIG U, which is limited to fixing lower Manhattan, has some people interviewed for this story questioning who will benefit the most from post-Sandy projects. 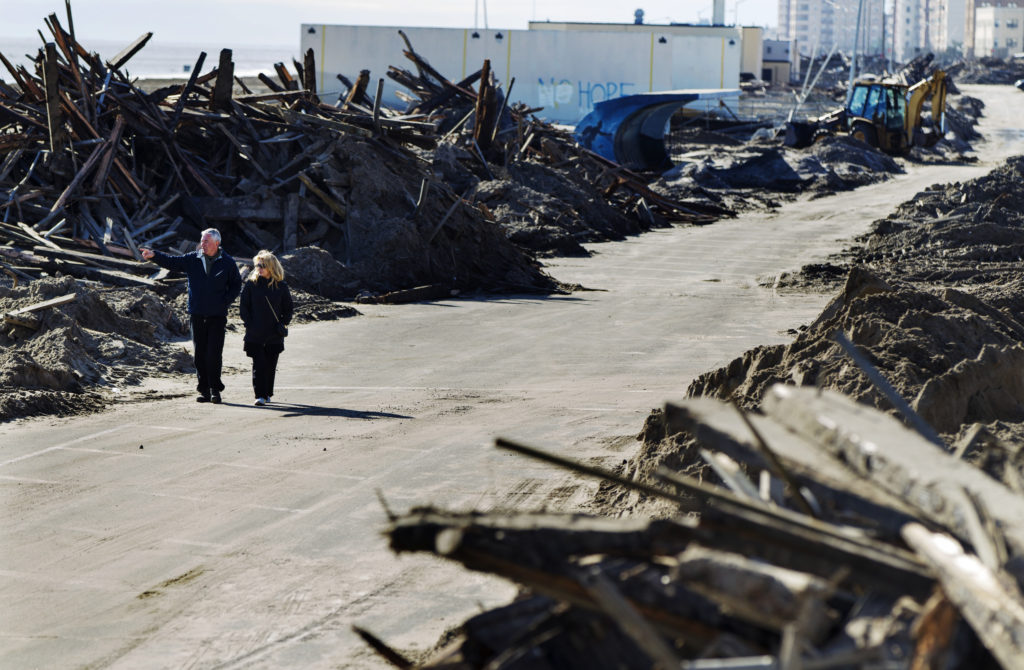 A couple walks through destroyed sections of boardwalk ripped apart by superstorm Sandy along Shore Front Parkway in the Rockaways area of the Queens borough of New York, November 4, 2012. Photo by Lucas Jackson/REUTERS

“People are worried about climate change, but in the immediate term, we’re concerned about gentrification,” said Milan Taylor, the founder of the Rockaway Youth Task Force. “People call this place home. It’s not undiscovered land. People are already trying to improve this space. When the disaster capitalists come and say we can shape this community, it doesn’t help people here.”

Taylor and other residents pointed to areas like Brooklyn and Harlem that have gentrified, driving out longtime residents. Experts like Graham and McPhearson said that a key element to the resilience of cities is having vibrant civil society groups like the Rockaway Youth Task Force.

When Sandy hit, that group was one of the most effective responders to the crisis, because they were organized and embedded in the community, Taylor said. And after Sandy destroyed stores including supermarkets that weren’t rebuilt, the group started urban farming to improve community access to healthy food.

“This is a waterfront community. People want to live here,” Taylor said. “There’s a lot of potential, but with that there’s opportunities and that might not be true for folks that are here. That’s a part of why we’re building institutions.”

Support for reporting this story was provided through a fellowship at the CUNY Graduate School of Journalism.

Left: A sign marks the high water point where floodwater from Hurricane Sandy damaged the Brooklyn Public Library in the Coney Island section in the Brooklyn borough of New York. Photo by Shannon Stapleton/REUTERS

Andrew Bossone is a general assignment producer with PBS NewsHour.