The faded, “distressed look” of a favorite pair of blue jeans, may come with a hidden price for the residents of New York.

The Hudson River dumps 300 million clothing fibers into the Atlantic Ocean each day, according to a recent study in the Marine Pollution Bulletin. Many of the fibers come from aging clothes, rinsed out with the laundry and into the environment. Approximately half of the fibers were plastic, while the remainder were spun from natural materials like cotton or wool. Invisible to the naked eye, these fibers can cause health problems for animals and humans.

An average-sized, above-ground swimming pool filled with this water would contain about 10,800 microfibers.

“The ocean is the endgame for plastics,” said marine biologist Abigail Barrows, who is a principal investigator with Adventure Scientists.

Barrows, who has been studying microfiber pollution in oceans for more than five years, wanted to learn more about what’s happening upstream in freshwater. So last year, Barrows and a team of scientists and volunteers measured microfiber pollution across all 13,300 miles of the Hudson river.

They hiked, waded, sailed and even whitewater rafted to urban and rural locations to collect 142 water samples using Barrows’ “grab method” analysis. The grab method involves filling a submerged container of water, then filtering the samples through an extremely fine screen, before counting and identifying the material of each microfiber.

The team found about one microfiber per liter of water, which seems small until you consider the sheer volume of the Hudson River. An average-sized, above-ground swimming pool filled with this water would contain about 10,800 microfibers, and the entire Hudson River dumps 300 million human-made fibers into the Atlantic Ocean each day.

The grab method is Barrows’ “real contribution to the field,” said Tim Hoellein, an aquatic ecologist at Loyola University who was not involved in the study. In the past, microfiber researchers typically used a “Neuston net” to collect samples. The funnel-like net, originally designed to study plankton, collects microfibers and other materials in the water while being towed behind a boat. But, unlike the grab method, tiny fibers can sieve through the net. That is why Hoellein believes the grab method gives a more accurate count of microfiber pollution.

“It reveals that most likely there is more material than we previously thought,” Hoellein said. 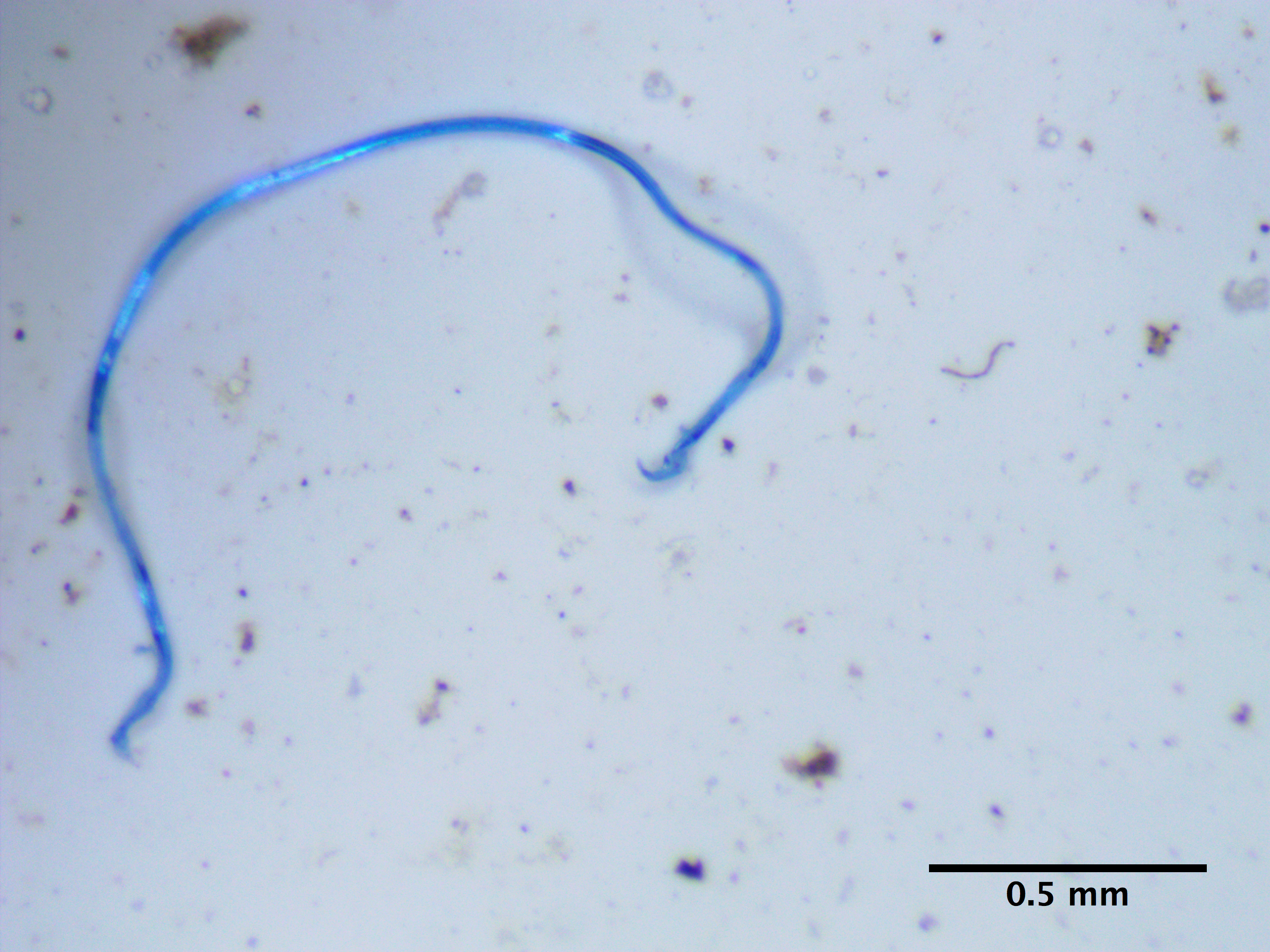 Under the microscope, Barrows identifies microfibers found in the Hudson River. Photo by Sara Cathey/Adventure Scientists

Rachael Miller, director of the Rozalia Project which is working to curb microfiber in laundry greywater, expected to see a larger concentration of microfibers in locations near wastewater treatment facilities or industrial sites. But instead the pollution was more uniform throughout the river.

“There was no pattern across the whole Hudson River — from Lake Tear of the Clouds, an alpine remote beauty, down to the heaving, thriving Manhattan,” said Miller, who is a co-author on the study. “It was a real surprise.”

“It’s invisible, but everywhere you go and everywhere I go, we are leaving a trail of fibers in our wake.”

If wastewater treatment facilities are not the major culprit, people may want to look their everyday clothes. Fabrics cast off tiny threads at every stage of their life. Even crime scene investigators count on perpetrators leaving behind bits of clothing. These clothes can shed more fibers into the air than laundering, according to Steve Carr, supervising scientist at the Los Angeles County Sanitation District.

“We are just not conscious of it,” Carr said. “It’s invisible, but everywhere you go and everywhere I go, we are leaving a trail of fibers in our wake.”

After a microfiber study of the Seine River in 2014, Bruno Tassin, an urban hydrologist at University of Paris-Est, faced the same dilemma: tons of pollution without definitive point source. So he conducted a follow-up in Paris in 2016 to determine if microfibers clouded the atmosphere. Tassin found that three to ten tons of microfibers rain out of the air onto the 1,098-square-mile region surrounding Paris, each year.

“We don’t know how they move through the air. There is a probable link between production and fallout, but we don’t know precisely,” said Tassin. But Tassin thinks other sources, such as ground runoff, might still play a role.

Pollutants and other fine particles can hang in the air and travel great distances, said George Thurston, who studies the health effects of air pollution at New York School of Medicine. These airborne fibers can also be toxic. During the industrial revolution, byssinosis or brown lung disease, befell textile plant workers due to cotton or other fibers in the factory’s air. But Thurston said more research is needed to ascertain how microfibers get around.

These airborne fibers can also be toxic. During the industrial revolution, byssinosis or brown lung disease, befell textile plant workers due to cotton or other fibers in the factory’s air.

“It would be interesting to find if [the results] varied seasonally,” Thurston said, explaining that westerly winds carry pollution from the the Midwest to New York, but in the winter, the air clears when winds shift northeast.

To reduce her personal plastic footprint, Barrows swapped fleeces in her wardrobe for natural wool sweaters, but cautions that even fibers made of natural materials can be coated with pollutants.

“Toxins and dyes are added into that thread. The science is still out. We don’t know how natural fibers are interacting with humans or animals,” Barrows said.

“We want to understand all of the [microfiber] sources and consequences for the environment. Only in understanding what those are, are we in a good position of coming up with solutions.” Hoellein said, citing the 2015 microbead ban as an example. In 2014, Hoellein found microbeads from cleaning products were abundant in wastewater. The following year, President Barack Obama instituted a microbead ban.

“Once we understood that it was there, where it was coming from, then we could make a change for the better,” Hoellein said.

Editor’s Note: An earlier version of this story misspelled the name of the director of the Rozalia Project. It’s Rachael, not Rachel, Miller.

Left: Lake Tear of the Clouds, in upstate New York, is near the rural headwaters of the Hudson River. Photo by Ben Henderson