You can view Nobel Award-winning scientists sketching their research in the video above.

What do you get when you ask 56 Nobel Laureate scientists to cartoon their greatest discoveries?

Photographer Volker Steger fearlessly tackled the challenge during an annual meeting with Nobel Laureates in the Bavarian town of Lindau. And what resulted was gritty, unpolished and playful — a far cry from the research itself.

See Elizabeth Blackburn’s mess of squiggly lines for example, with the words “Big long chromosomes!” scrawled above them. Blackburn won the 2009 Nobel in medicine for her discovery of the molecular nature of telomeres. The drawing by 2007 Nobel Laureate Sir Martin J Evans features the cartoon head of a mouse — and nothing else. You can view a virtual book of the drawings here and here.

Here’s how Steger did it, according to a forward by Nobel Laureate Sir Timothy Hunt in the book, Sketches of Science, which documents the project and the resulting art exhibitions. Hunt won the Nobel for Physiology or Medicine in 2001 for his work on protein molecules that control cell division.

When the scientists entered the room, they were greeted with a blank sheet of paper and a pile of crayons, and without warning, asked to illustrate their discoveries.

“The resulting pictures show surprised people, who haven’t had time, really, to polish their pictures or burnish their reputations,” Hunt writes. “No aides or colleagues were on hand to help, no slides, no Powerpoint: these people had been ambushed!” 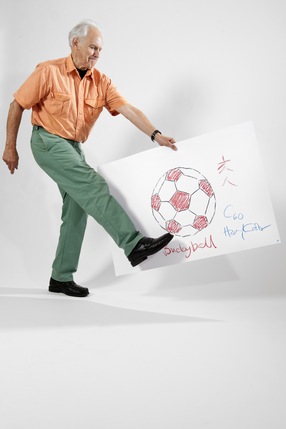 Then they were told they could pose however they liked with their drawing. One scientist lay on the floor. One stood on one leg. One held his sheet upside down. One mimed kicking his across the room.

The art is on exhibit at Germany’s Mainau Castle now, and will travel to Singapore in September.

“Perhaps the public would prefer to invest them with a gravitas, a dignity befitting to their status, but in truth, most of these people had fun finding things out, and if this shows, it’s perhaps a good thing,” Hunt said. “It ought to help demystify the austere aura of scientists as priests of an arcane, impenetrable religion.”

Patti Parson and Rebecca Jacobson participated in this report.