Arthur Ashkin, Gérard Mourou and Donna Strickland have been awarded the 2018 Nobel Prize in physics for their work in creating “tools made of light.” This year’s awardees changed the way we manipulate and investigate the smallest and fastest parts of the world around us.

Ashkin was awarded half of the Nobel Prize for his groundbreaking invention of “optical tweezers” made of lasers that let scientists trap and manipulate tiny organisms and particles in beams of light. Mourou and Strickland, who share the other half of the prize, were recognized for their breakthroughs in creating “high-intensity, ultra-short optical pulses,” or beams of light strong enough to perform eye surgeries and precise laser machining.

Strickland was the third woman ever to win a Nobel Prize in physics, and the first in more than fifty years. Watch her interview with PBS NewsHour here.

Who are the winners 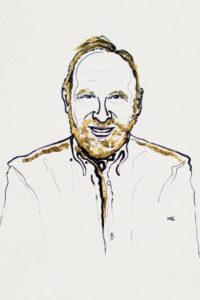 Arthur Ashkin is one of this year’s Nobel prize winners in physics for the invention of optical tweezers. Illustrated by Niklas Elmehed/The Nobel Prize in Physics

Arthur Ashkin was born in Brooklyn, New York. The 96-year-old physicist may not be available to give interviews today, he told the Nobel committee, because he is “very busy working on his latest paper.” Although Ashkin retired from Bell Labs in 1992, he is active in his home laboratory. He is the oldest person ever awarded a Nobel.

Gérard Mourou, 74, was born in Albertville, Savoie in the French Alps. He spent much of his career in the US at the University of Rochester and the University of Michigan, and has since returned to France where he now works at the École Polytechnique.

Donna Strickland, 59, was born in Guelph, Canada. She teaches and leads a research team at the University of Waterloo in Ontario.

The Nobel was divided between two major innovations in laser technology.

Lasers are devices that create and amplify a single source of light. Light that comes out of a laser is one color, or one wavelength, and does not spread out or weaken the way a flashlight beam would.

Immediately after the invention of lasers in the 1960s, Ashkin started trying to manipulate objects with light. He discovered that small translucent particles could be pushed using the force from a laser beam — particles first were trapped in the center of a beam, and then pinned in place using another laser aimed from the opposite direction. These optical tweezers could then be used to control and direct individual cells, viruses, proteins, and even atoms.

Strickland and Mourou worked together on laser amplification, producing the shortest and most intense bursts of laser energy ever created by humans. In research that would be used for Strickland’s doctoral thesis, the pair manipulated beams of light to make them more powerful.

Just in! Donna Strickland during an early morning interview for https://t.co/3VsHzjF7LK, shortly after hearing the news that she had been awarded the #NobelPrize in Physics.

The technique, known as chirped pulse amplification or CPA, can use a specialized combination of prisms, optical fibers and mirrors to increase the peak strength of a burst of laser energy. Because laser beams could only be amplified so far before they destroyed the amplifying material, Strickland and Mourou decided to first “stretch” out a laser pulse, lowering its peak power by slowing it down. The low-powered beam could then be amplified safely. After magnifying its power, the beam was re-compressed, creating a short but highly energetic burst of laser light.

These bursts can be as short as an attosecond in duration–that’s one quintillionth of a second. High-powered lasers around the world use this technology to increase the energy in their beams, precisely slicing into material or producing the world’s fastest camera images.

These innovations in light give researchers access to manipulate and study interactions that are too tiny or too fast for conventional methods.

Lasers are used daily in laboratories around the world. Ashkin’s optical tweezers enable scientists to cut, move, contain and inspect particles like strands of DNA and individual cell organelles.

Mourou and Strickland’s CPA method has been used to help millions of people with laser eye surgery, and the cameras that use their technology can capture chemical interactions or even electrons in motion around an atom.

The field of laser manipulation is still pushing toward higher intensities, sharper focus, and more power–as this technology develops, the discoveries made by this year’s Nobel awardees could have implications for subjects as widespread as medicine, electronics hardware and nuclear physics.

Left: Laser light can be stretched, amplified, and then compressed to create strong, short pulses of energy. Image by Johan Jarnestad/The Royal Swedish Academy of Sciences