A tiny brown bat wriggles about John Huckabee’s gloved hands, voicing its displeasure with a high-pitched series of screeches and squawks.

The wildlife biologist expertly grasps one of the bat’s wings and unfolds it. Bending close, he searches for telltale signs of infection.

“There are a few small deep pigmented areas of scarring,” Huckabee said, turning the bat over in his hands. “But overall looks like he’s in very good shape.”

This silver-haired bat is one of the lucky ones. But not long ago hikers discovered a sick bat in the forests east of Seattle. It was taken to PAWS Wildlife Center in Lynnwood, Washington, where Huckabee was one of the first to see the patient.

“There were some lesions on the wing that were dry,” Huckabee said. “It had the appearance that it may have a fungal infection.”

Huckabee became suspicious. Could these be signs of the deadly bat disease, white-nose syndrome?

White-nose was first discovered in New York state in 2006 when large numbers of bats started turning up dead. At the time, no one had seen anything like it. Researchers soon discovered that a mysterious fungus was attacking the bats while they hibernated. The disease associated with the fungus became known as white-nose syndrome for the color that it turns bats’ muzzles.

“White-nose syndrome was really challenging when we first discovered it because it was not known to science,” said Jeremy Coleman, national white-nose syndrome coordinator for the U.S. Fish and Wildlife Service. “The fungus that causes white-nose was not even named at that time.”

Since it was discovered, the disease has raced across the country spreading all the way to Oklahoma and Nebraska in just a few years. But the disease had never been found west of the Rocky Mountains and the idea that it could have jumped more than 1,300 miles seemed far-fetched. 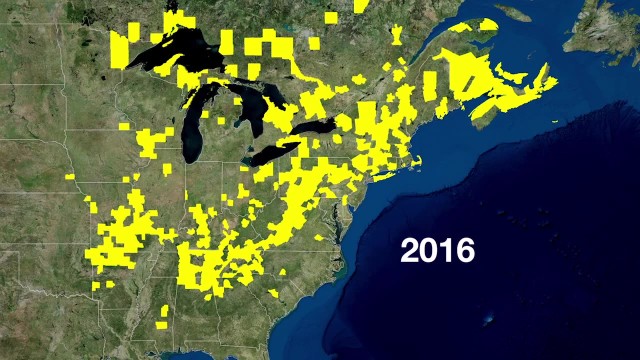 Between 2006 and 2016, white-nose syndrome had spread from New York state across much of the Northeast. Source: Whitenosesyndrome.org. Photo by Madeleine Pisaneschi/KCTS9

But when tests on Huckabee’s little brown bat came back positive for white-nose, it sent researchers scrambling for answers.

“It’s a big mystery as to how white-nose got to Washington state,” said Abby Tobin, white-nose syndrome coordinator for the Washington Department of Fish and Wildlife. “There are just a lot of unknowns.”

For years, it wasn’t even known how the disease killed its victims. But research published in 2015 suggests that bats with white-nose wake up more often during hibernation, causing them to burn through the fat reserves needed to survive the winter. Starvation and death soon follow. The disease has killed 5.5 million bats and counting. Bat populations in the Northeastern United States may have declined by as much as 80 percent.

This sudden and widespread die-off is unprecedented in hibernating bats. Scientists consider it unlikely that bats affected by white-nose will rebound quickly because most are long-lived and have only a single pup per year.

The big question now is whether the disease will ravage West Coast bats as severely as it has their eastern cousins. Around the Northwest, bat researchers have mobilized and are trying to take stock of their populations before the disease takes hold. 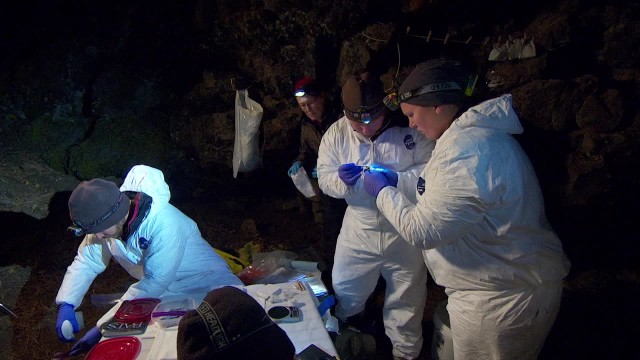 Researchers in eastern Oregon capture bats in nets to look for signs of white-nose syndrome and document the health and size of the region’s bat populations. Photo by Todd Sonflieth/OPB

In Oregon, a team of federal and state researchers took to the high desert last summer to learn what species are present in Oregon and how big the bat populations are.

“Bats hang out in the dark. They hang out in these big cliffs and crevices that we can’t access,” said Tom Rodhouse, an ecologist with the National Park Service. “So we’ve gone for decades without really understanding what’s happening with bats.”

Rodhouse and the team waited until sundown that evening to erect a series of nets that resemble those used for badminton, but with a much finer mesh. Bats navigate in the dark using echolocation, but they can’t easily detect the nets.

It wasn’t long before they began wheeling into the nets. The team of researchers descended to disentangle their tiny captives. Then they checked the health, sex and species of each bat before setting them free.

“The project’s really designed to have a very important finger on the pulse of what’s happening with bats,” said Pat Orsmbee, a retired bat specialist from the Bureau of Land Management. “We will have a better feel for what species we need to focus on and which ones are being hardest hit.”

“There’s really no way for us to ascertain what’s happening with our bat populations without this kind of a coordinated, large scale survey effort,” Rodhouse said.

In Washington, relatively little is known about the state’s bat populations. But fear of a white-nose outbreak has jump-started research. Abby Tobin and a team of state researchers have been using specialized microphones to listen for bats as they fly overhead. They’ve been trying to determine which species are present and where they’re congregating. Researchers are also taking environmental samples from the forests around Western Washington, looking for signs that the fungus is present.

“For us here in Washington, our best hope of protecting bats really is just to enhance bat habitat and preserve the foraging areas,” Tobin said. “That way we decrease other threats to bats to help them continue the population to grow.” 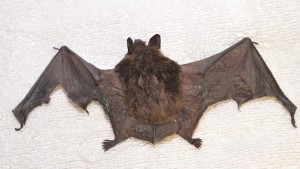 Since the first infected bat was discovered last year, the fungus has been found twice more in Washington, both near the original site in the forests east of Seattle. But nearly a year after white-nose was first discovered in Washington, no large-scale die-offs have been seen around the Northwest.

And there are reasons for optimism: eastern bats congregate in large numbers in caves and mines when they hibernate, sometimes by the thousands. The disease, which is spread primarily by bat-to-bat contact, can wreak havoc in these large colonies. Western bat species, however, behave differently.

These small differences in behavior may be what ultimately saves western bats. But it could be years before definitive answers emerge.

Left: Wildlife veterinarian John Huckabee has been inspecting bats for signs of the deadly white-nose syndrome. Huckabee was the first to detect the disease in the Northwest in the spring of 2016. Photo by Michael Werner/OPB