Not so long ago, cities were starved for trees. That inspired a fight against urban warming

In 2007, New York City launched MillionTrees NYC, a program designed to plant 1 million new trees along streets, in parks and on private and public properties by 2017. They hit their goal two years ahead of time.

These programs are popular for a reason: Not only do trees improve the city’s appearance, but they also mitigate the urban heat island effect – the tendency for dense cities to be hotter than surrounding areas. Studies have shown that trees reduce pollutants in the air, and even the mere sight of trees and the availability of green spaces in cities can decrease stress.

But as I show in my new book, “Seeing Trees: A History of Street Trees in New York City and Berlin,” trees weren’t always a part of the urban landscape. It took a systematic, coordinated effort to get the first ones planted.

A landscape that was hot, congested – and treeless

As New York City’s population exploded in the 19th century, poor sanitary conditions, overcrowding and hot summers made the city a petri dish for disease: Between 1832 and 1866, cholera outbreaks alone had killed an estimated 12,230 people.

By the turn of the 20th century, living conditions had deteriorated. Neighborhoods continued to be overcrowded, indoor plumbing was still lacking and open sewers could still be found along many of the city’s dusty streets and alleys. 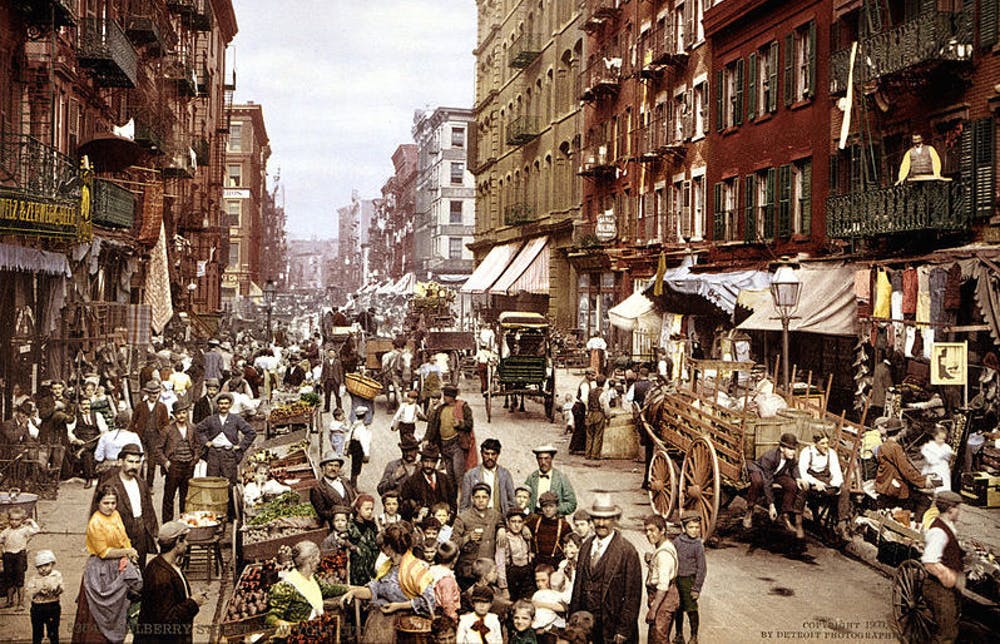 By the turn of the century, the city’s congested streets could be choked with people, but without a green leaf in sight. Photo by Library of Congress

Trees could be entirely absent from a neighborhood. The few trees that did line city streets – mostly ailanthus, elms and buttonwoods – could be individually cataloged with relatively little effort. For example, in 1910, The New York Times reported on the decreasing number of trees along Fifth Avenue. The article noted that between 14th Street and 59th Street, there were only seven trees on the west side and six on the east side of the avenue.

A physician proposes a solution

In the 1870s, eminent New York City physician Stephen Smith spearheaded a movement to plant more trees. Doing so, he argued, would save lives. 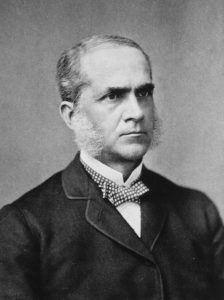 Smith, who pioneered the city’s sanitary reforms and founded the Metropolitan Board of Health, was the author of a groundbreaking study that correlated high temperatures with childhood deaths from a number of infectious diseases. He concluded that planting street trees could mitigate oppressive heat and save 3,000 to 5,000 lives per year.

To promote street tree planting in his city, Smith drew attention to what became known as the Washington Elm study.

Attributed to Harvard College mathematics professor Benjamin Peirce, the study claimed that the famous Washington Elm standing on the Cambridge Common in Massachusetts had an estimated crop of 7 million leaves that, if laid out next to each other, would cover a surface of 5 acres. The study illustrated the vast potential of a single tree’s foliage to absorb carbon dioxide, emit oxygen and provide shade.

In 1873, Smith drafted and introduced his first bill to the New York state legislature for the establishment of a Bureau of Forestry, which would promote the cultivation of street trees.

But the bill stalled; it took several additional attempts and amendments before it was finally approved in 1902. Even then, it didn’t provide adequate funds for municipal street tree planting. So, in 1897, Smith joined a group of citizens who decided to take matters into their own hands. 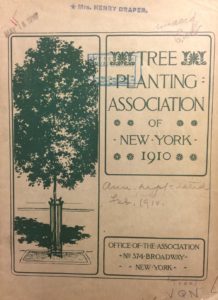 The city encouraged residents living on a block to collaborate on planting decisions so that trees could be planted at regular intervals, providing even shade and a uniform aesthetic. Some species, like the Norway maple, were favored because of their tall trunks and their ability to grow in poor soil and withstand urban pollution.

On the front lines of fighting climate change

For these early activists planting trees was a way to cool streets and buildings in the summer and beautify the city’s gritty urban landscape.

Only later would scientists come to realize the enormous potential that urban trees besides entire forests held in mitigating the effects of climate change.

In 1958, Chauncey D. Leake, president of the American Association for the Advancement of Science, warned of the warming atmosphere in a well-received paper at the National Conference on Air Pollution.

He pointed out that warming temperatures could cause the huge polar ice caps to melt, leading to sea-level rise. To lower levels of carbon dioxide in the atmosphere, he suggested planting 10 trees for every automobile and 100 for every truck.

Leake’s proposal was an early attempt at using tree planting to offset global warming. Since then – and particularly over the last two decades – methods that calculate the number of trees needed to offset carbon dioxide emissions have become more sophisticated. For this purpose scientists and foresters from the U.S. Forest Service and the University of California Davis developed iTree, a suite of software tools that help to determine a tree species’ ability to sequester carbon, reduce pollution and decrease storm water runoff in a particular ecosystem.

Despite their popularity, new trees can be met with resistance. While many residents enjoy the shade and look of a tree, there’s always someone who sees them as a nuisance that blocks sunlight from entering their apartment. Others complain about the smelly flowers that some trees produce, the seeds they shed, and the way they attract birds that speckle sidewalks with their droppings.

But as the perils of climate change become more apparent, the hope is that the broader benefits of trees prevail over personal predispositions.

Left: In 1919, 1,376 new Norway Maples were planted along streets in Brooklyn. Photo by Department of Parks of the Borough of Brooklyn, City of New York.

Sonja Dümpelmann is associate professor of landscape architecture at the Harvard University Graduate School of Design (GSD) where she teaches history and theory courses.