A new smartphone attachment could provide almost immediate, in-the-field test results for HIV and syphilis. The palm-sized device, tested recently on expectant mothers in Rwanda, could diagnose these diseases in 15 minutes, according to a study published this week in the journal Science Translational Medicine.

“This is one of a series of reports that is taking us forward to a new era of having a lab in your pocket,” said Eric Topol, author of “The Patient Will See You Now” and editor of Medscape.

In the same way that giant computers shrank to fingernail-size chips, engineers have been shrinking laboratory tests, said Samuel Sia, professor of biomedical engineering at Columbia University and one of the study authors. It’s called microfluidics, and it has some big advantages over current lab tests.

“Reactions can happen faster at a smaller scale. With a bigger volume scale, you have to wait for molecules to move around,” Sia explained. But with less fluid and few places for the liquids to go, “it’s smaller, it’s portable and it’s actually faster. You limit hardware power consumption, so it runs straight off the power in your phone itself.”

Sia and his team modeled the technology in part on the ELISA test, which stands for enzyme-linked immunosorbent assay, a relatively simple and common blood test for diseases like HIV. ELISA tests look for different biomarkers in the blood; in this case, it’s looking for an antibody that’s produced when a person is infected with HIV. During the test, the blood sample runs through an enzyme and substrate. The enzyme will stick to the antibody for the disease you’re looking for, and the substrate will change the color of the sample to indicate a positive or negative result.

It’s an accurate test, Sia said. And while there are HIV tests that promise results in half an hour, health care providers recommend getting an ELISA test to verify the diagnosis.

But it can take hours to run. Labs never run one sample at a time, so when a nurse draws your blood for a sample, it’s put in a queue. Take into consideration transporting samples between a lab and a clinic, and it could take days, even weeks, to get results, Sia said.

An ELISA test can also be expensive. The equipment costs about $18,400, Sia said — and that doesn’t include the computer.

Enter this new “plug and play” system for a smartphone or tablet. Rather than draw a full teaspoon of blood, a health-care worker pricks the patient’s finger and eases a few drops of blood into a plastic cartridge. The cartridge snaps onto a microfluidic chip, which contains all the testing materials. Rather than use an enzyme and a substrate, the chip has gold and silver
nanoparticles to identify the antibodies. The chip is inserted into the device, or “dongle”, connected to a smartphone via the audio jack. The phone powers the device, and a program prompts the health-care worker to enter the patient’s ID number.

The health-care worker then pushes down on a black bulb, which sends the blood into the device. Fifteen minutes later, results for an HIV test and a syphilis test pop up on the screen. 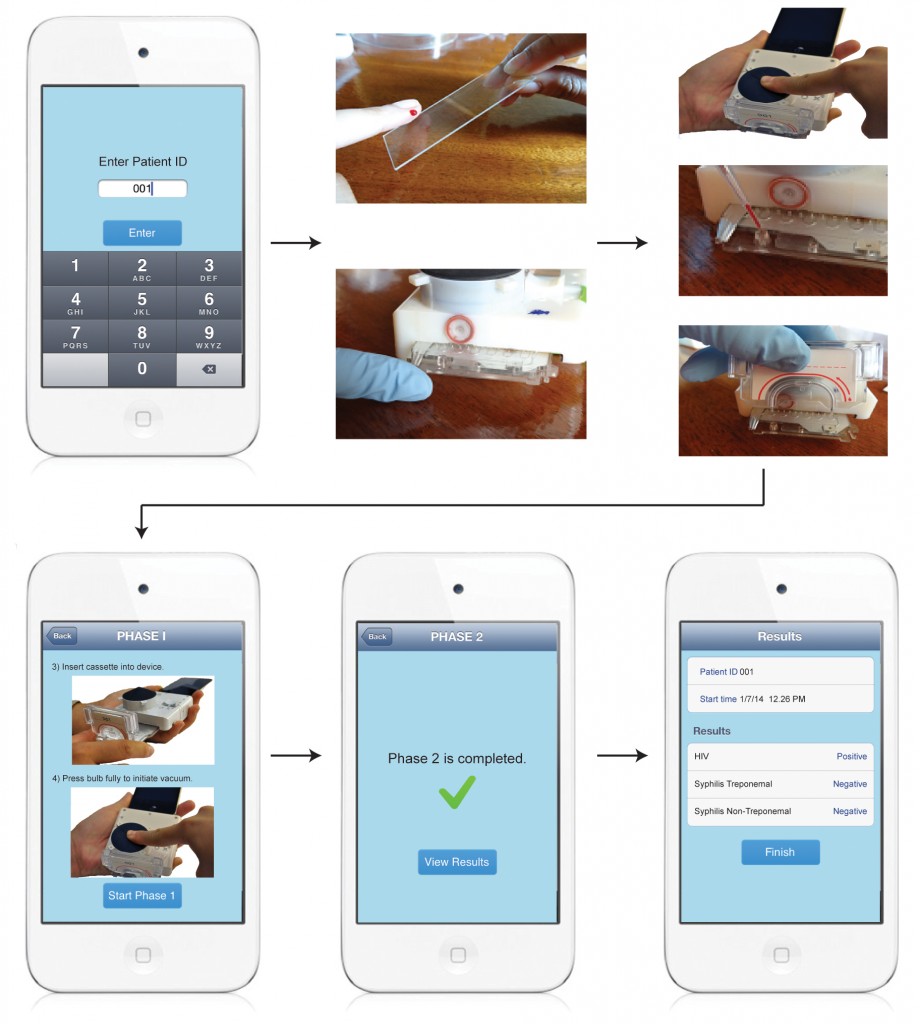 This step-by-step illustration shows how a smartphone attachment can be used to run blood tests for HIV and syphilis. Image by Tassaneewan Laksanasopin

It’s user-friendly for workers, and for the patients, it’s less painful than a blood draw, and more convenient. And at $34 to make, it’s also cheap, Sia said.

Getting a rapid HIV and syphilis test has been a key priority in developing countries, said Dr. Massimo Ghidinelli head of the HIV unit for the Pan American Health Organization. There are HIV tests that can deliver results in half an hour, he said, but that all depends on where you are, the test you need and the clinic’s lab resources.

For expectant mothers, getting a rapid result is crucial to reducing mother-to-child transmission stopping the disease from spreading to their babies, he added. Some women in developing countries can get antenatal care early, but many don’t see a doctor until they go into labor, Ghidinielli said. Having a rapid, inexpensive test could drastically lower transmission rates, even in an emergency.

“If you can diagnose the disease effectively and accurately, you can consider treatment options immediately,” Ghidinelli said. “But it’s always a race against time.”

There are some downsides, Topol said. Among them, accuracy and privacy are concerns. And any new device needs testing to prevent misdiagnosis.

But its possibilities, he added, extend beyond HIV diagnosis. Researchers have been developing smartphone attachments that diagnose diseases from malaria to cancer. And diagnosing diseases like dengue fever, malaria and tuberculosis at the point of care could prevent horrible outbreaks, he said.

In the developed world, this technology could also be adapted to monitor chronic diseases like diabetes, Sia said. It won’t replace a hospital lab or a doctor, but it could give patients more control over their health.

“There are a variety of biomarkers in your body that can give you an indication of your health condition. By monitoring their trends over time, you can catch the disease before it happens,” he said. “Instead of having to go to a hospital to get tested, you can stay at home and monitor yourself.”

Left: These smartphone dongles can run blood tests for HIV and syphilis in 15 minutes, right in your doctor's office. Photo by Samiksha Nayak