The odd swimming style of plesiosaurs decoded by a robot

The plesiosaur is long extinct, but thanks to a biomechanical engineer, it has been reincarnated — as a robot. This new so-called “robosaur” reveals the secret behind the animal’s odd but powerful swimming style, which could inspire alternatives to boat and submarine propellers.

Scientists have speculated over the swimming ability of plesiosaurs for decades. Long-necked and round-bodied, the plesiosaur lived 203 million years ago during the age of dinosaurs, but it was a marine reptile, more closely related to lizards and snakes.

“There has been no other animal that swims like this, ever,” Luke Muscutt, a biomechanical engineer at the University of Southampton in the U.K., told NewsHour. A fish propels itself by swishing its tail side to side, while a dolphin flaps its tail up and down. But the plesiosaur is the only known animal that swam with four nearly identical flippers.

Early work in the 1920s argued the plesiosaur’s four flippers moved like oars, in a simultaneous rowing motion. But other scientists posited that plesiosaurs sliced through the water like penguins, using an up-and-down flapping motion for their flippers. Sea turtles and sea lions also have four aquatic limbs, but they differ in shape and purpose. The front flippers create thrust, while the back flippers steer.

So, after digging for clues in fossil records and X-rays of existing animals, Muscutt tried to deduce the shape and motion of the plesiosaur flipper. He used a 3D printer to create four flippers and then attached them to a mechanical body so he could fine tune their motion inside a water tank. The team programmed the robot to flap in a range of patterns, speeds and angles while using a sensor to measure thrust and efficiency.

“They had a nice method of looking at the full shape of these flippers,” said Georgia Institute of Technology computer scientist Greg Turk, who made a computer model of plesiosaur swimming behavior in 2015. With only plesiosaur bones as a reference, Muscutt studied modern-day animals to guess the flipper’s dimensions beyond the bone, said Turk, who wasn’t involved in the study.

Turk’s model predicted that the plesiosaur’s front flippers dominated its swimming style, but he said that Muscutt’s robotic plesiosaur outperforms their predictions. By adding colorful dyes to the water to observe the flow over the robotic flippers, Turk said Mucutt’s experiments offer a more precise picture of the plesiosaur’s fluid dynamics than a computer model. 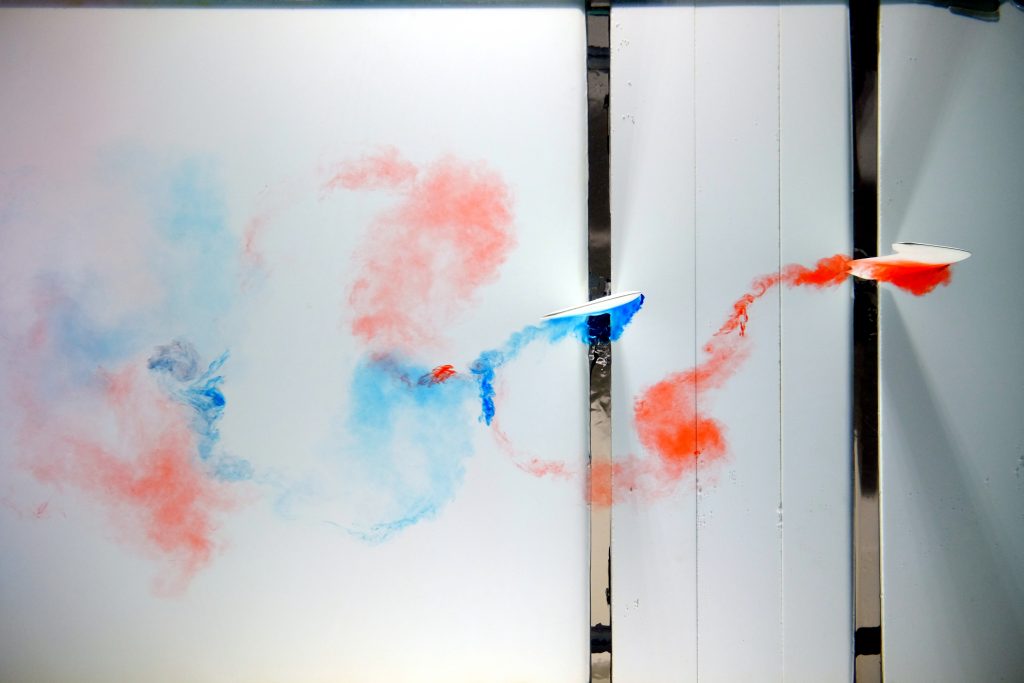 Unlike the sea turtle’s flippers, which steer or propel, Muscutt found that the plesiosaur robot uses all four flippers to power through the water. The biggest thrust didn’t come from the front or rear flippers alone, but through a harmonious combination of both, Muscutt said of his study published in Proceedings of the Royal Society B.

The key was the front flipper’s wake. As a single plesiosaur flipper moves up and down, it creates a vortex — a mini whirlpool that moves backward behind the flipper. When timed right, the plesiosaurs’ hind limbs get a boost from the fore flippers’ wake. The process is similar to geese flying in a V pattern. The lagging birds ride the air lifts from the ones ahead of them.

This finding argues that the plesiosaur’s back flippers were not just for steering. By grabbing wake energy, they played a role in propulsion.

“Engineers spend their whole life trying to increase the performance of a wing on a plane, for example, by 3 percent. But an increase of 60 percent is a huge amount in engineering,” Muscutt said. He added that today, designing an efficient flipper for an underwater vehicle from scratch would be a large undertaking. But understanding plesiosaurs’ locomotion could generate new technology that makes underwater vehicles quieter, faster and more nimble.

Any aquatic vehicle that has a propeller is fair game for being replaced by flapping wings, Muscutt said. He is already working on a submarine that could model the plesiosaurs’ unique underwater flight.