Thanks to Ig Nobels, we now know how long it takes elephants to pee

What happens when you attach a weighted stick to the back of a chicken? Where is the most painful place on the body to be stung by a bee? Can we diagnose appendicitis just by driving over speed bumps?

These aren’t the questions that have plagued humanity for years, but a few brave scientists were willing to explore these baffling riddles. On Thursday, they were rewarded for their efforts at the 25th First Annual Ig Nobel Prizes ceremony at Harvard University. According to their website, the Ig Nobel awards are meant to “celebrate the unusual, honor the imaginative — and spur people’s interest in science, medicine, and technology.”

Previous Ig Nobel prizes have gone to a scientist who developed a method for determining which bug just hit your windshield (Entomology), the British Royal Navy, for ordering sailors to yell out ‘Bang’ instead of using live cannon shells (Peace), and the scientists who demonstrated that high-priced placebos were more effective than low-priced placebos (Medicine). The awards carry a cash prize of 10 trillion Zimbabwean dollars, and are handed out by genuine Nobel Laureates. 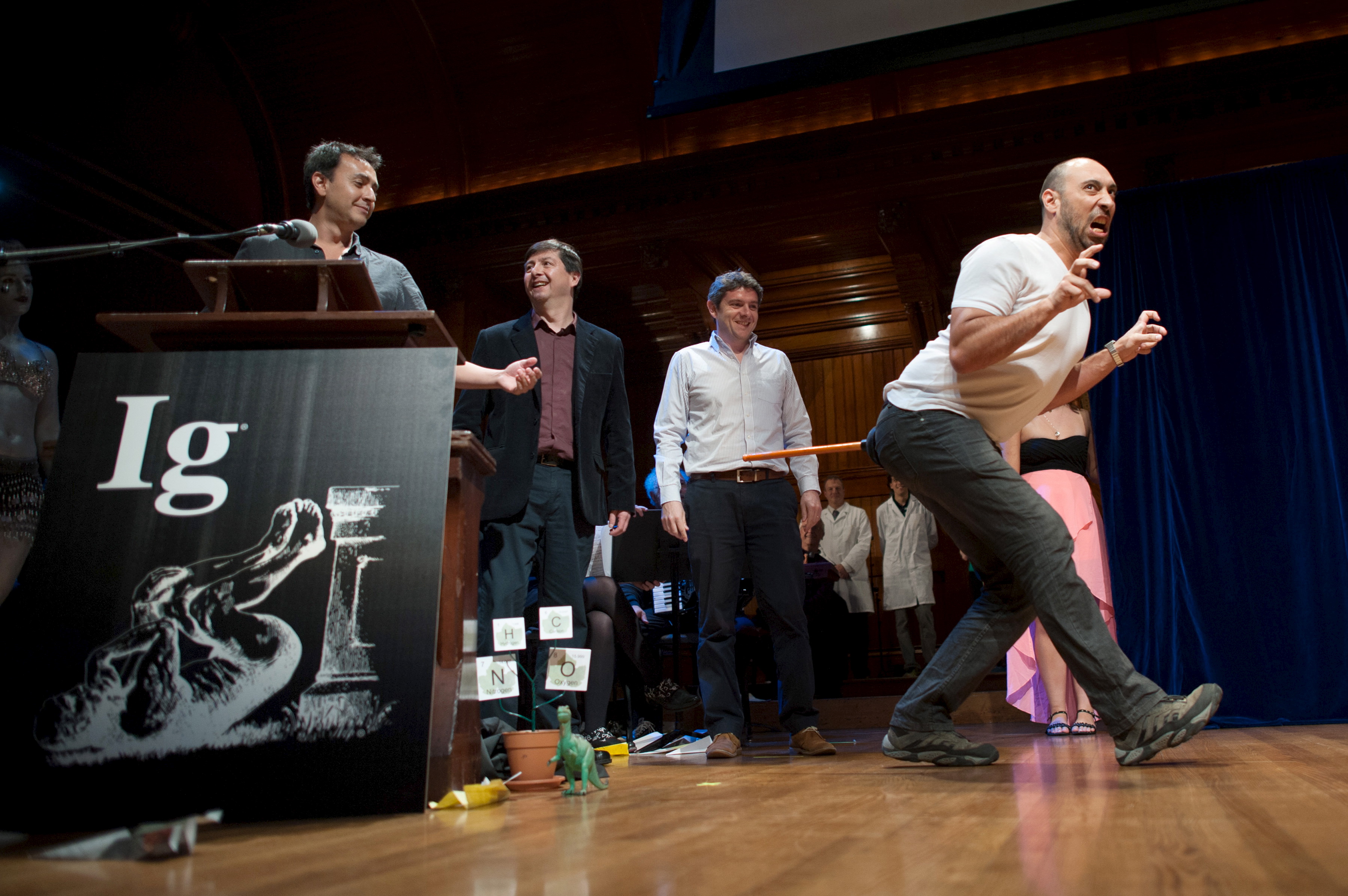 Bruno Grossi (R), walks like a dinosaur as he and his team accept the Ig Nobel Prize in Biology at the 25th First Annual Ig Nobel Prizes awards ceremony at Harvard University in Cambridge, Massachusetts. He and his team observed that when you attach a weighted stick to the rear end of a chicken, it would move in a manner similar to a dinosaur. Photo by Gretchen Ertl/Reuters

Here are a few highlights from this year’s ceremony:

BIOLOGY PRIZE: The prize went to a group of Chilean and American scientists who observed that when you attach a weighted stick to the rear end of a chicken, it walks like a dinosaur. The experiment was meant to see if birds, which share many common traits with their reptilian ancestors, could provide clues about dinosaur locomotion.

ECONOMICS PRIZE: The prize went to Thai police who offered more money to officers who did not take bribes. As reported by several news sources, Thai police officers were being offered 10,000 baht, or $310, if they refused small ($3) bribes in the course of their every day duties.

PHYSIOLOGY PRIZE: The prize went to Michael L. Smith, who used one test subject (himself) to determine which locations on the body were most painful to be stung by a bee. Most painful locations were the nostril, upper lip and penis shaft.

MATHEMATICS PRIZE: The prize went to two Austrian/German scientists who calculated whether Moulay Ismael the Bloodthirsty, the Sharifian Emperor of Morocco could have really fathered 888 children from 1697 through 1727. The result? It’s possible. (If you have sex once or twice a day every single day).

PHYSICS PRIZE: The prize was awarded to a group of Taiwanese and American scientists who tested the biological principle that nearly all mammals empty their bladders in about 21 seconds (give or take 13 seconds).This proves that duration of urination does not change with body size.

In addition to the awards, the ceremony featured a mini opera and something called “24/7 Lectures,” in which “some of the world’s top thinkers” explain their work first in 24 seconds and then again in seven words that “anyone can understand.” And then there’s the tradition of throwing paper airplanes at the stage.

All winners are listed on the IgNobel website, along with a video of the complete ceremony.

Left: Wearing a toilet seat on his head, David Hu, Associate Professor of Mechanical Engineering and Biology at Georgia Institute of Technology, walks away with his team's Ig Nobel Prize in Physics for testing the biological principle that nearly all mammals empty their bladders in about 21 seconds (plus or minus 13 seconds). The annual prizes are awarded by the Annals of Improbable Research as a whimsical counterpoint to the Nobel Prizes. Photo by Gretchen Ertl/Reuters