Oil and Arguments in the Gulf 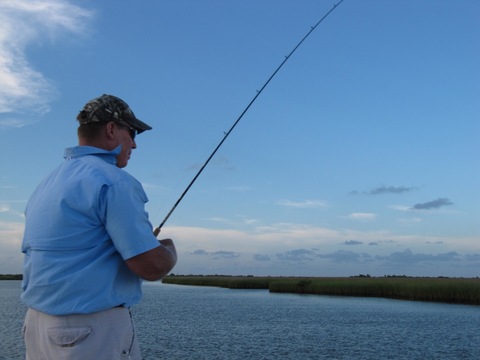 There is a charm about New Orleans; a feeling and a culture that is unique. But in the wake of Hurricane Katrina and now the big oil spill, there is a sense of argument as well. People are angry — and some of them aren’t sure at what.

Producer Joanne Elgart Jennings, cameraman Malcolm Brown and I spent the last week in New Orleans and the Gulf, reporting on the spill and the dispersants meant to break up the oil and keep it off the beaches.

On a boat trip 60 miles south of New Orleans, I chatted with a captain who had lost most of his fishing guide business. He used to employ 14 guides. Today, all of them are gone — mostly working for BP cleaning up oil. The captain, Ryan Lambert, is angry: He’s unhappy the levees on the Mississippi River have destroyed the way the river used to work, and essentially ruined the marshes and bayous that were home to hundreds of species of fish. Land on his map is no longer land; it’s open water, shallow and unproductive. He’s not sure who to blame, but he’s upset.

And he’s very skeptical of the dispersants that BP has used, even though they may have saved some birds and beaches. Instead, he says, the oil goes into the water, and will remain a hidden danger for years to come. He thinks BP wanted to hide the oil for public relations reasons.

“What’s worse, the oil or the dispersant? No one knows, and we need to know before we keep putting it in there,” he says.

But some folks appreciate the effort to keep the oil offshore. The fishermen and the people who sell fish and shrimp are glad to have anything to lessen the impact of the oil and restore the fishing that has been lost. At a farmers market in New Orleans, they were selling shrimp that was freshly caught and oil free. Dispersants were OK with them — as long as nobody could point to serious consequences.

An environmental organization called Gulf Action Network has sued to force the government to get the company that makes the dispersant to disclose what chemicals they use in the product, which is called Corexit. Matt Rota is resources director with the Network and explained that even though the company has given out some information about Corexit, they haven’t said how much of each chemical they use.

“We just think this is extremely important for the public to know this information,” he says. “Because we have EPA doing some work on dispersants, but if this information is made more public […] independent scientists could use the information to really make sure this is an open and transparent process.”

At the farmers market, Rota had an interesting argument over oil with a woman who supported almost everything the Gulf Action Network does.

The one thing that bothered her was Rota’s support of the Obama administration’s moratorium on deepwater oil drilling. The president wants to halt such drilling for a limited time and is pressing hard to stop it. But in Louisiana much of the economy depends on work in the oil fields, and so Anne Brett — normally a staunch environmentalist — took on Rota…in a polite but firm way. Watch their discussion:

All-in-all, residents of the Crescent City are passing the time debating the crucial issues — and there are plenty of issues to debate — in this much-besieged part of the world.