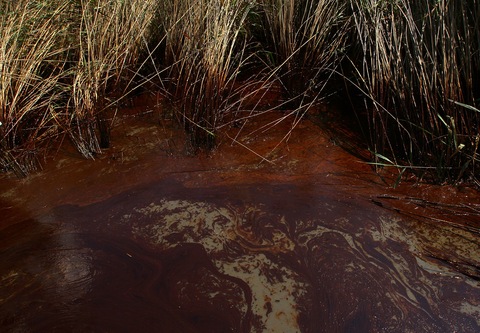 BP is expected to know as early as Thursday afternoon whether its latest effort to plug the five-week-old oil spill in the Gulf of Mexico has worked. The company on Wednesday began pumping heavy drilling mud into the damaged pipeline some 5,000 feet below the surface in a procedure known as a top kill.

The technique has between a 60 percent and 70 percent chance of working, according to BP. However company officials have cautioned that the procedure has never been tried at such a deep depth. In a statement early Thursday morning, the company said the top kill effort was “ongoing” and that “there are no significant events to report at this time.”

As the Gulf Coast region waits for word, President Barack Obama is set to outline findings from the 30-day review of off-shore drilling he ordered in the early days of the spill. The president is also expected to announce a six-month freeze on permits to drill new deepwater wells, as well as a suspension of any applications for offshore drilling in the Arctic through the remainder of this year.

The president’s remarks come as a new USA Today/Gallup Poll finds the public increasingly frustrated with the federal response to the accident. According to the poll, “six out of 10 adults say the federal government is doing a ‘poor’ or ‘very poor’ job handling the spill,” while “A majority — 53 percent — say the same about Obama.”

We’ll be watching this story throughout the day here on The Rundown and on Thursday’s Program. Meantime, we’re curious to hear your thoughts on the spill and also how to clean up the oil beginning to push into Louisiana’s fragile marshes. Let us know by visiting our Google Moderator series here.

â€ªThe Obama administration on Thursday will issue it first National Security Strategy. As the New York Times reports, the 52-page document “argues that preserving American leadership in the world hinges on learning to accept and manage the rise of many competitors, and dismisses as far too narrow the Bush era doctrine that fighting terrorism should be the nation’s overarching objective.” â€¬

â€ªIn his introduction to the document, the president writes: â€¬

â€ª”As we fight the wars in front of us, we must see the horizon beyond them …To get there, we must pursue a strategy of national renewal and global leadership — a strategy that rebuilds the foundation of American strength and influence.”â€¬

â€ªConcerns about the national debt have pushed lawmakers in Congress to scale down legislation that would have provided nearly $200 billion in jobless benefits and tax cuts. The House has scheduled a vote on the bill for Thursday, and will look to clear the package before the 10-day Memorial Day recess that begins Friday.

“Unless lawmakers act before June 1, millions of people could cease to be eligible for up to 99 weeks of jobless benefits and doctors’ Medicare payments could fall by 20 percent,” the Washington Post reports.