On Final Day of Copenhagen Summit, a Look at NewsHour Climate Coverage 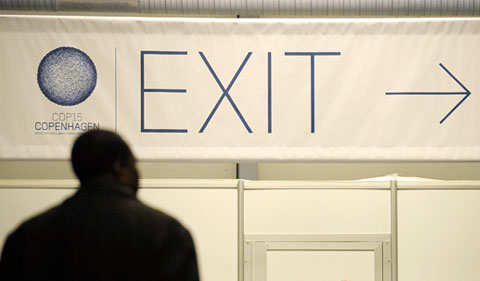 Over the past two weeks, the PBS Newshour has had comprehensive coverage of the climate conference in Copenhagen, not only with our updates during the day in our Rundown blog from Ray Suarez and his team, but also the layers of perspective we have been adding for our audience from here in Washington and beyond.

— Judy Woodruff spoke with with Todd Stern, the lead U.S. negotiator at the climate summit, and laid out some of the very stumbling blocks that we have seen stalling the talks in this primer.

During the conference, Ray Suarez filed these reports for the program:

— In Copenhagen, Tensions Rise Inside and Outside Summit

— Time Running Out for Climate Change Talks as Nations Clash

— U.S. Looks to Revive Climate Talks With $100B Yearly Pledge

On our site, Ray contributed the following insights:

— A Monumental Week for Climate Ahead in Copenhagen

— A Tough Road to Resolution in Copenhagen

— What Can Still Be Accomplished at Copenhagen?

—How Environmentally Friendly Is the Climate Summit?

—A Crucial Moment in the Copenhagen Talks

— How climate change and food security connect in this slide show.

While the talk in Copenhagen maybe of particles per million in atmospheric carbon emissions in the future, the Newshour also took viewers around the world every night to see some of the potential and real impacts of climate change:

— Lindsey Hilsum of Independent Television News examined how mining rare earth minerals — considered to be an obscure yet profitable industry, is causing a major environmental dilemma in China.

— James Mates of ITN looked at the alarming rate glaciers are melting atop Mount Everest and how that could affect the rest of the world.

— In India, special correspondent Fred de Sam Lazaro reported how the simple act of cooking can be dangerous for the environment and lung health.

Looking ahead, the NewsHour will continue to bring you on-air and online coverage of efforts around the world to deal with climate change. Stay tuned.