The ongoing fight over the Rover pipeline, explained

President Donald Trump and Environmental Protection Agency chief Scott Pruitt have vowed to boost domestic energy production by dismantling federal regulations on things like drilling, but environmental agencies in both blue and red states have pushed back in the months since Mr. Trump took office. One such battle in Ohio suggests that oil and gas companies may not have a blank check to drill after all — even with a Republican in the White House ordering expedited environmental reviews on major pipeline projects.

Energy Transfer Partners — the same company behind the controversial Dakota Access Pipeline — has received 13 violations from the Ohio Environmental Protection Agency since construction began this year on the Rover Pipeline Project, a 713-mile pipeline designed to gather gas from processing plants in Eastern Ohio, Western Pennsylvania and West Virginia. The new pipeline will distribute 68 percent of the gas carried through Ohio and West Virginia into markets across the country, with remaining gas flowing to storage fields across the state of Michigan and as far north as Ontario, Canada.

Ohio flagged the most recent violation last week after pollutants from the pipeline were were unlawfully discharged into an unnamed river that flows into a larger lake. The spill took place days after federal regulators allowed Rover Pipeline construction to resume horizontal directional drilling, a construction method used to install pipelines under bodies of water.

Following a number of these environmental violations — some of which prompted a four-month stop on some drilling after two separate spills dumped two million gallons of drilling mud contaminated with diesel fuel into Ohio wetlands — the state EPA director notified Energy Transfer Partners it owes $2.3 million dollars in civil fines and damages. But the company has held firm it is not responsible for those fines, and still plans to finish the project next year.

Such a dispute would be less noteworthy in blue states, like California, which enforces some of the toughest environmental regulations in the U.S. But in Ohio — a more moderate state with a robust energy sector that voted for Trump — competing views represent an impeding tension inside the Republican Party on energy and climate change policy at the state level.

Ohio Republican Gov. John Kasich is a case in point: Kasich ran to the left of Trump in last year’s presidential race on a platform that included support for renewable energy, and has taken steps as governor to boost wind and solar development. Craig Butler, Ohio’s EPA Director, was appointed by Kasich in January 2014.

As the battle moves forward, here’s a look at the multistate Rover Pipeline, why it stalled earlier this year, and how the fight might play out in coming months.

Energy Transfer Partners — which recently announced it would give North Dakota $15 million to reimburse the state for its response to protest movements along Dakota Access pipeline — has committed numerous violations of Ohio’s Water Quality standards, according to state documents. Its violations include disposing of pollutants containing diesel fuel near sources for public drinking water, considered illegal in Ohio without a permit.

Butler’s dissatisfaction with the company festered in April, when, two weeks into construction, millions gallons of drilling fluid leaked into high-quality wetlands.

Ohio’s EPA ordered Energy Transfer Partners to file for a construction stormwater general permit, designed to help regulate the amount of rain water containing oil, chemicals and trash that runs off to coastal waters. It also fined the company $431,000 for damage caused by the spill and the resources needed to clean it up, a number that has increased five times over with subsequent violations.

Butler sought to negotiate a consensual order with the company to outline future steps to reduce the prevalence of drilling mud spills. The Federal Energy Regulatory Commission, which has the authority to stop interstate pipelines found to be in violation of their contracts, ordered Energy Transfer Partners to stop new horizontal directional drilling near water sources, temporarily halting the $4.2 billion dollar pipeline project.

What did state and federal officials find?

Since May, the Ohio EPA has communicated its concern directly to the FERC after samples of drilling fluid taken along the Tuscarawas River detected petroleum hydrocarbon constituents, mainly found in diesel fuel.

On the first day of June, in a letter to the senior vice president of Rover Pipeline LLC, FERC instructed “Rover preserve and maintain all documents and information related to the composition, acquisition, preparation, and disposal of the drilling fluid.” 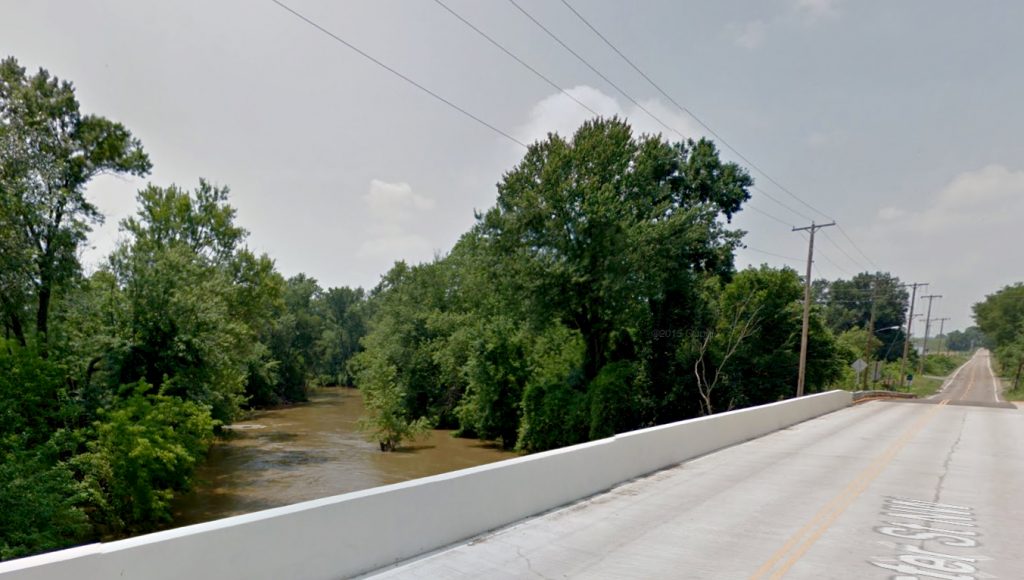 A screengrab from Google Maps shows the Tuscarawas River just outside of Navarre, Ohio. The river is one of the sites that the state EPA says was contaminated by the Rover Pipeline Project.

A July report by Ohio EPA found discharged industrial waste was contaminating run off that feeds into state sewage, also contaminating waterways that require costly treatment provided by state agencies. Federal regulators sent a notice of federal violations to Rover Pipeline LLC, acknowledging the Ohio EPA’s frustration over its claim that “Rover falsely promised it would avoid adverse effects to a historic resource that it was simultaneously working to purchase and destroy.”

Why did construction resume?

Why has ETP ignored Ohio’s orders?

The company has yet to pay Ohio the $2.3 million it says it is owed, a combination of $2 million in civil penalties and the rest in restitution for emergency response and oversight costs.

In a letter to Butler on September 25, ETP President and Chief Operating Officer Matthew R. Ramsey wrote that “your own agency and you personally, have repeatedly praised Rover for its cooperative approach” adding “Rover has already spent close to $20 million to mitigate those impacts.”

The Energy Policy Act of 2005 exempts pipeline projects from state regulation. But the Ohio EPA retains the authority to take enforcement action if what’s known as a toxic release inventory violation occurs. The Ohio EPA has sanctioned Rover Pipeline for not adhering to state air and water quality standards, and Butler maintains his legal stance that Energy Transfer Partners is not protected from state penalties.

“To engage in time consuming and expensive litigation over claims as narrow and baseless as those you have asserted is wasteful and needless,” Ramsey said.

Energy Transfer Partners benefits from a president that campaigns in support of oil and gas executives. It also has close ties to the new administration. Kelcy Warren, CEO of Energy Transfer Partners, donated $100,000 to the Trump Victory Fund and an additional $66,800 to the Republican National Committee after Trump won the electorate. Four days into his presidency, Trump signed an executive order overruling Obama’s decision to stop Dakota Access construction, allowing the pipeline to reach completion after all. Rick Perry, Trump’s pick to head the U.S. Department of Energy, was a corporate board member of Energy Transfer Partners up until 2016.

The latest violation notice issued by Ohio EPA to Rover Pipeline occurred three days after FERC re-approved horizontal drilling at nine locations along the route. The incident earned the pipeline a 13th notice from Ohio regulators for violating state environmental standards this year. Soap wastewater and soil sediment were detected in a tributary of Irish Creek in Loudon Township, Carroll County, Ohio.

Approximately 500 feet of waterway was impacted by the spill, requiring 6,000 gallons of water to be recovered by vacuum truck. Affecting aquatic life and discoloration of the water is yet another “illegal discharge without a permit,” Butler said. 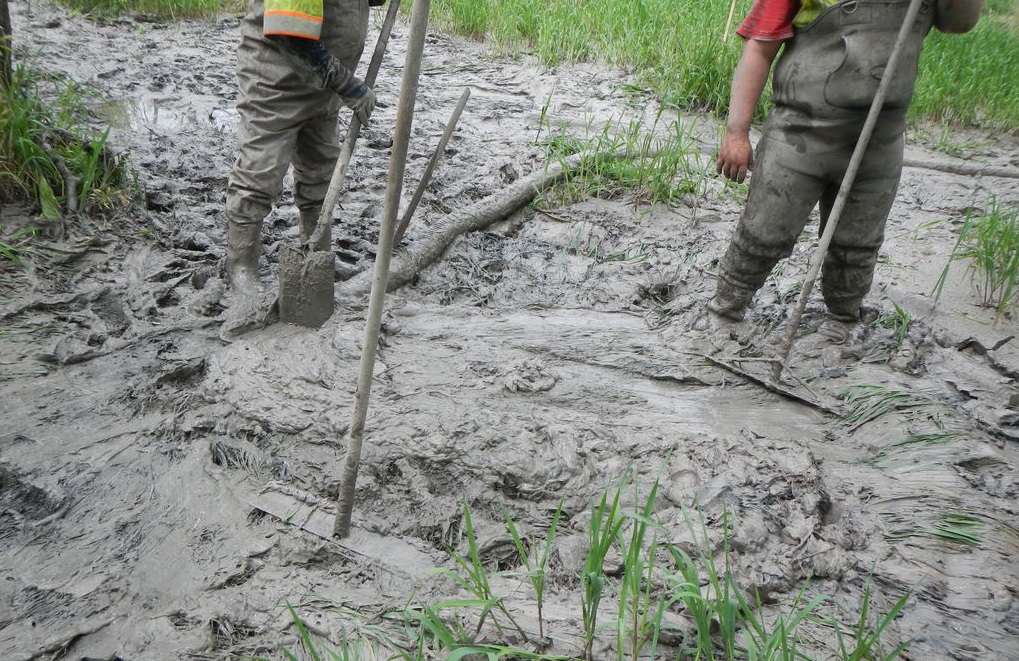 Millions of gallons of drilling fluid leaked into Ohio wetlands during construction of the Rover Pipeline Project. Photo: Ohio EPA

“Although Rover’s arrogance and blatant disregard for Ohio’s environmental laws is no longer surprising, we will remain vigilant in holding the company accountable,” Butler said in a statement.

A spokesperson for Energy Transfer Partners described the 13th violation to NewsHour as “an issue where the contractor put Dawn dishwashing liquid in the exit hole of the drill under a roadway, without our approval. The employee has been let go. The area has been remediated.”

Currently, Energy Transfer Partners does business in 38 states. The Rover Pipeline Project will distribute natural gas to markets across the U.S., and onward to Canada.

As a state agency, Ohio EPA can issue penalties, but does not have authority to halt a pipeline project it finds in violation of state law. Only the FERC can do that.

Whether the Ohio EPA will be able to obtain relief for damages and receive civil penalties from Energy Transfer Partners is key to future debate on the power of states to sanction oil and gas executives refusing to maintain proper permits before releasing contaminants into water supply.

On June 27, Administrator Scott Pruitt announced that the EPA is “taking significant action to return power to the states and provide regulatory certainty to our nation’s farmers and businesses.” But Butler told NewsHour he has not contacted nor been contacted by Pruitt’s office in relation to Rover Pipeline.

It is unclear if FERC plans to broaden its investigation to the pipelines parent company; a spokesperson told NewsHour the pipeline project is now required to update the FERC on a weekly basis. As construction resumes, federal regulators continue reviewing drilling proposals from the natural gas pipeline. In addition, a FERC spokesperson told NewsHour “re-training of construction crews to prevent similar instances of noncompliance” is ongoing.

With FERC’s approval to resume drilling at nine locations, the Rover natural gas pipeline is on schedule to be operational by the end of the first quarter of 2018. The company looks “forward to continuing to work with the FERC to adhere to the requirements outlined in its approval,” Alexis Daniel, a spokeswoman for Energy Transfer Partners, told NewsHour.

The question remains if Ohio EPA can legally require Energy Transfer Partners to apply for a stormwater permit. Ramsey, on Sept. 25, told Butler, “You cannot.”

But Butler cautions the agency “may end up in federal court.”

Dan Tierney, a spokesperson for the Office of Ohio Attorney General, told NewsHour it was preparing litigation but no filing date had been set.