Oregon to transform lakes into batteries to charge electricity grid

Swan Lake Valley is a patchwork of farm fields and grazing land about 20 minutes from Klamath Falls. The slopes of the surrounding juniper-scattered hills rise sharply from the valley floor, brown against the green of hay and alfalfa below.

About 5,500 acres of the valley is part of Edgewood Ranch. Lauren Jespersen’s family has been on this land since the 1970s, farming about half of it and making pellet livestock feed. But like many farm families, the Jespersens are trying to ensure their futures by doing more with their land.

“It’s hard to make a living in agriculture anymore unless you are an extremely large operation,” Jespersen says.

Like a growing number of farmers on the sunny, windy eastern side of the Cascades, they’re getting into the business of renewable energy. For Jespersen, it’s an emerging niche of the renewables market: large-scale energy storage called “pumped storage hydroelectricity.”

At its very core, pumped hydro is a giant water battery.

This battery needs two essential things to work: a steep elevation change and access to water. Edgewood Ranch has both.

Washington, Oregon and California are among the leaders nationwide with some of the most ambitious goals for renewable energy.

Solar and wind are poised to become a larger part of that green-power mix. But there’s a problem: people need electricity even when the sun’s not shining and the wind isn’t blowing.

One way to solve this problem is to store the excess energy and then release it when there’s a need.

If things go as Jespersen hopes, Swan Lake Valley and Edgewood Ranch will become the home to the largest energy storage project in region, and the first larger-scale pumped hydro project built nationally in a quarter decade. 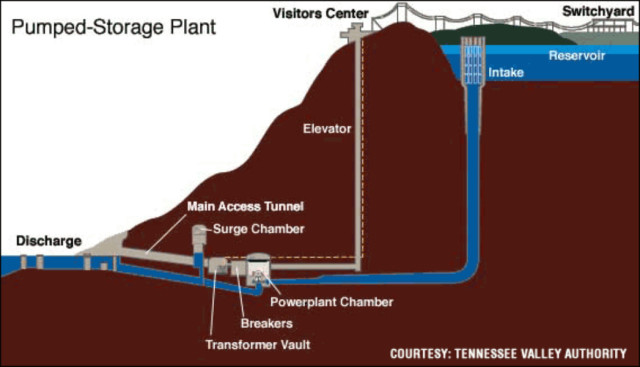 An example of a pumped hydro system. The pipe, or penstock, for the Swan Lake North project would be run above ground along the hillside. Illustration by Tennessee Valley Authority

How does it work?

Start with two reservoirs – one up high on a hill and then one way down below.

“And in between those two will be a large steel pipe that we call the penstock – about 4 meters in diameter,” says Joe Eberhardt of EDF Renewable Energy, the French-owned company developing the Swan Lake North project.

Inside that large pipe are pump-generators that can push the water from the bottom reservoir to the top or generate electricity when water flows downhill between the two.

Any water in the upper reservoir is essentially electricity waiting to be me made.

For Eberhardt, it’s simple economics – buy low, sell high. When there’s a lot of power on the grid, like during the day when renewables like solar and wind are in high production, a pumped hydro project will pump the water uphill. Then when production is low and demand is high for electricity, the project will generate power like a hydroelectric dam – using the water to turn massive turbines.

“The result is we can buy really low price power, wait 12 hours and return to grid at higher price,” Eberhardt says.

Already more than 90 percent of energy storage capacity in the United States comes from pumped hydro projects built in the 1960s, ‘70s and ‘80s (including one at Grand Coulee in Washington).

Back then, pumped storage was mostly used alongside nuclear power plants, which are most efficient when they produce a steady amount of power – whether it’s evening, when people need to light their rooms, cook dinner, and run the dishwasher, or the middle of the night, after they’ve turned out the lights and just about everything else.

Nuclear power plant operators would build pumped storage systems to act as a sponge for the energy they produced during low-peak times. With that capability, they wouldn’t have to power down their plants and they could make money selling the electricity they squeezed out of the sponge during peak use.

But the end of the nuclear power boom meant the end of building pumped storage. And there haven’t been any new large projects in decades, even though variable renewable energy development has taken off.

Part of the reason is that pumped hydro projects are large and complicated and take years to develop.

“The regulatory process for these projects can take a very long time. Sometimes it can take a decade or longer,” says Jeff Leahey of the National Hydropower Association.

Back in the mid- to late-2000s there was a flurry of new pumped hydro projects proposed in the Pacific Northwest. Many failed to materialize. But Swan Lake survived, although the size of the project has decreased from 1,000 megawatts to just below 400 megawatts.

And of the six pumped hydro projects in Oregon, Washington and Idaho currently working their way through the federal regulatory process, Swan Lake is the furthest along.

Despite the early sputters in developing pumped hydro storage projects in the region, there’s seemingly good news for those that have stuck it out. The renewable energy landscape has changed quickly, even radically, in the projects’ favor.

“As we move to incorporate more climate greenhouse gas reduction strategies… with that is going to come a need for more of these types of assets – pumped storage, as well as energy storage as a whole,” Leahey says.

Just in the past two years, President Obama’s Clean Power Plan came into effect nationally. And Oregon and California have approved some of the strongest renewable energy goals in the country. Energy storage is starting to enter the policy conversation as well.

But officials are still playing it safe when it comes to including energy storage in long term plans for the region.

John Harrison is with the Northwest Power and Conservation Council. Every five years the Council releases a new long-term energy plan covering the states that get energy from Bonneville – Oregon, California, Idaho and Montana. In their most recent plan, pumped hydro was mentioned, but not as something to count on.

“There’s a lot of potential in different emerging technologies, but we can’t say for certain yet exactly which ones will emerge as cost effective and the best options,” he says.

Right now pumped hydro is a proven technology and is among the most cost-effective storage options out there.

But that doesn’t mean Swan Lake North in Southern Oregon will ever make it to construction. The project is still deep in the licensing process with the Federal Energy Regulatory Commission. And there are concerns from the community.

Some have questioned the project’s plan to rely on groundwater to fill and keep the reservoirs full.

Two environmental groups, WaterWatch of Oregon and Oregon Wild question the legality of transferring the water rights needed. They also question the wisdom of using so much groundwater in water-strapped Klamath Basin and the potential trickle down effects it could have on the region’s protected fish.

“Both the initial filling of the reservoir and the annual replacement of evaporation will further deplete already declining groundwater, and likely surface water, resources of this basin. Water is clearly not available in the Klamath Basin for this large new proposed water use,” the groups said in a letter to the Oregon Water Resources Department.

The Klamath Tribes also spoke up at a project scoping meeting this summer, saying the BLM land where the upper reservoir will be built has cultural significance.

“This is out in areas where religious traditional practitioners would go to do their ceremony,” says Perry Chocktoot, head of the tribe’s Culture and Heritage Department.

And even if the project gets its license, the developer will need a utility to step forward and buy the power.

Joe Eberhardt and EDF Renewable Energy are trying to time the Swan Lake pumped storage project to come online right when the grid needs it most – and best case scenario, that would be eight years out.

“The surest sign of knowing that demand is there is when a utility steps up to be our customer. At that point, when we can sign a long term power contract with them, we’ll know the market has arrived,” he says.

And finally there’s that chirping little voice of Elon Musk and the cheap-lithium-ion battery-promise of the Tesla Gigafactory. It’s enough to keep pumped hydro advocates up at night.

“If Elon Musk can find a way to really drop the price of lithium ion – because currently it’s not competitive with pumped storage – that is definitely a game changer,” Eberhardt says.