Looking at Earth from 106,000 miles miles away, it’s easy to forget the complexity of our planet and the 7.5 billion people that live there. A new image from NASA’s OSIRIS-REx probe offers such a vantage point.

The photo was captured during OSIRIS-REx’s flyby of Earth on Friday. The probe, which passed within 11,000 miles of Earth, needed a boost from the planet’s gravity to reach the orbital plane of its destination: the near-Earth asteroid Bennu. 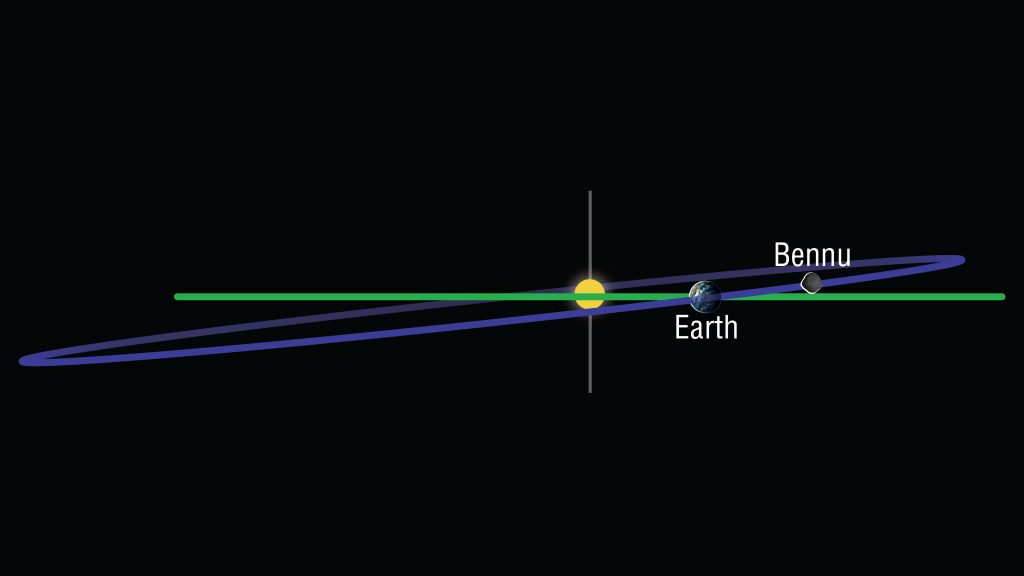 Asteroid Bennu’s orbit around the Sun is tilted at a six-degree inclination (or angle) from Earth’s orbit. On Sept. 22, the OSIRIS-REx spacecraft used the Earth’s gravity to boost itself onto Bennu’s orbital plane. Photo by University of Arizona

OSIRIS-REx will reach Bennu in 2018, where it will spend a year mapping the surface of the carbon-rich rock. Scientists hope to ultimately land the probe on Bennu with the aim to collect two ounces of the asteroid, which may offer clues to the origins of the solar system.

The mission will also beam back calculations of Bennu’s orbit, given the asteroid has a relatively high probability of impacting Earth in the late 22nd century. The probe aims to return its rock collection to Earth by 2023.

For now, you can scope out this shot for our planet taken by the space miner. The dark streaks at the top are due to the short exposure times — less than three milliseconds — that are needed to take a photo of an object as bright as the Earth.

Left: An image of Earth taken by the OSIRIS-REx MapCam on Sept. 22. The view shows the Pacific Ocean, with Australia in the lower left and Baja California and the southwestern U.S. in the upper right. The dark streaks at the top are due to short photo exposure times, which are need to capture an object as bright as Earth. Photo by NASA's Goddard Space Flight Center/University of Arizona

Shops, gyms to reopen in England under new COVID-19 plan

NBA players hailed by pope at Vatican for demanding justice