In East Africa 800,000 years ago, major earthquakes and extreme changes in climate shook the region and transformed the landscape. Over the following 500,000 years, 85 percent of the animals – including species of elephant, horse and monkey – went extinct, and smaller creatures emerged.

A startling set of studies released Thursday show that something else was happening during this time: our early human ancestors were making sophisticated tools, tens of thousands of years earlier than previously known.

The research, led by the Smithsonian National Museum of Natural History and published in Science, rewrites the timeline on the use of color pigments, the manufacturing of sophisticated tools and long-distance trade.

“The behaviors that we’re looking at as distinctive and fundamental to who we are today may have been in place at the root of the origin of our species,” said Smithsonian paleoanthropologist Rick Potts, who led the project. 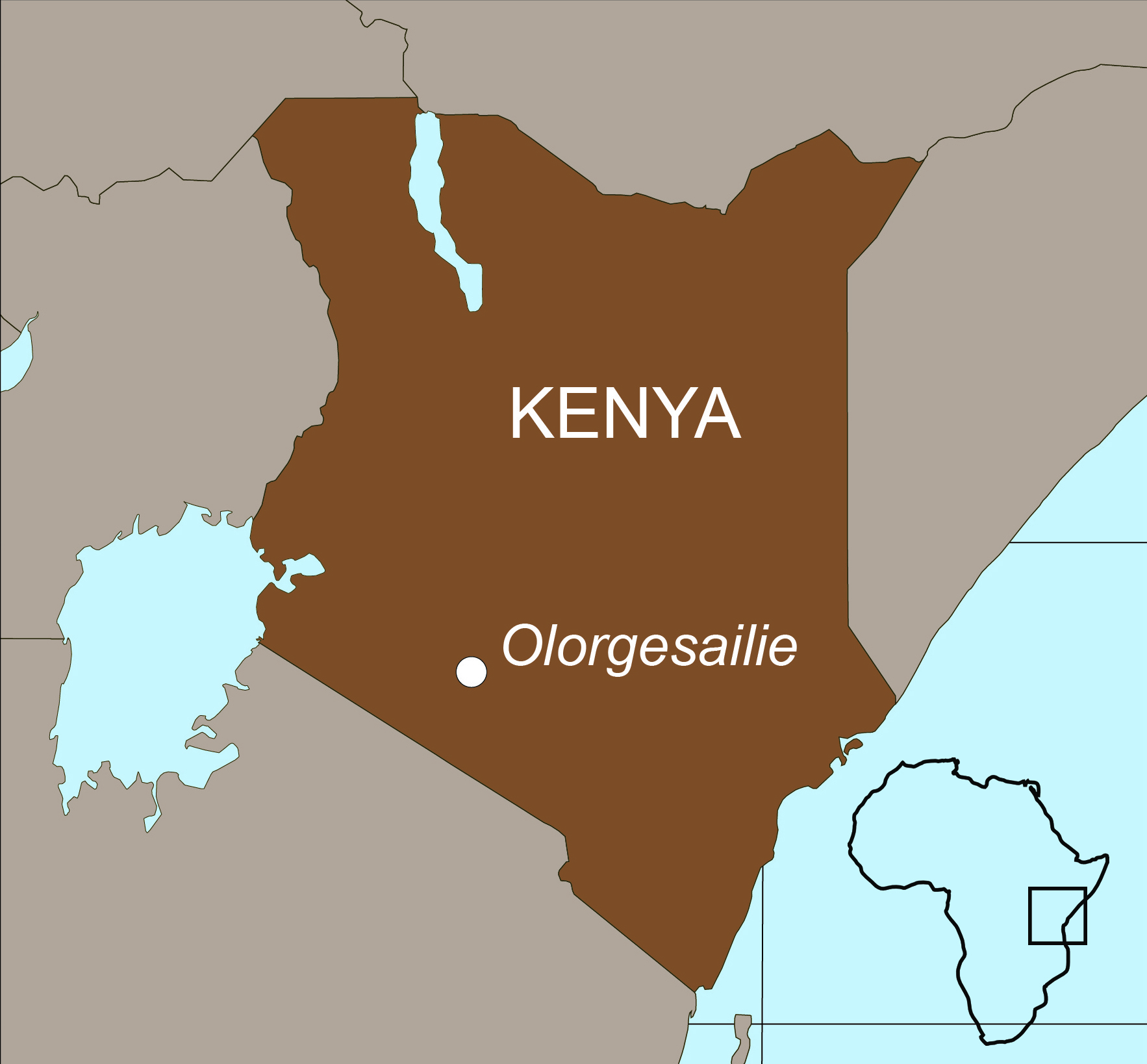 The Olorgesailie Basin is in southern Kenya. It holds an archaeological record of early human life spanning more than a million years. Photo by Human Origins Program, Smithsonian

Potts has been digging in the dirt of Kenya’s Olorgesailie Basin for three decades. In his latest study, his team analyzed the layers of sediment in the Kenyan region in order to characterize the environmental changes of the time.

In 2002, they unearthed something unexpected — a set of cutting tools made from obsidian — a volcanic rock that was not native to that region.

Until now, scientists had believed such small sleek tools — like arrow tips and small blades — had not arisen until later in the Middle Stone Age, starting around 285,000 years ago in Africa. But Potts’ team spotted these artifacts in the rock layers dating between 320,000-305,000 years ago — which correspond with the earliest known fossils for Homo sapiens, the modern human species. 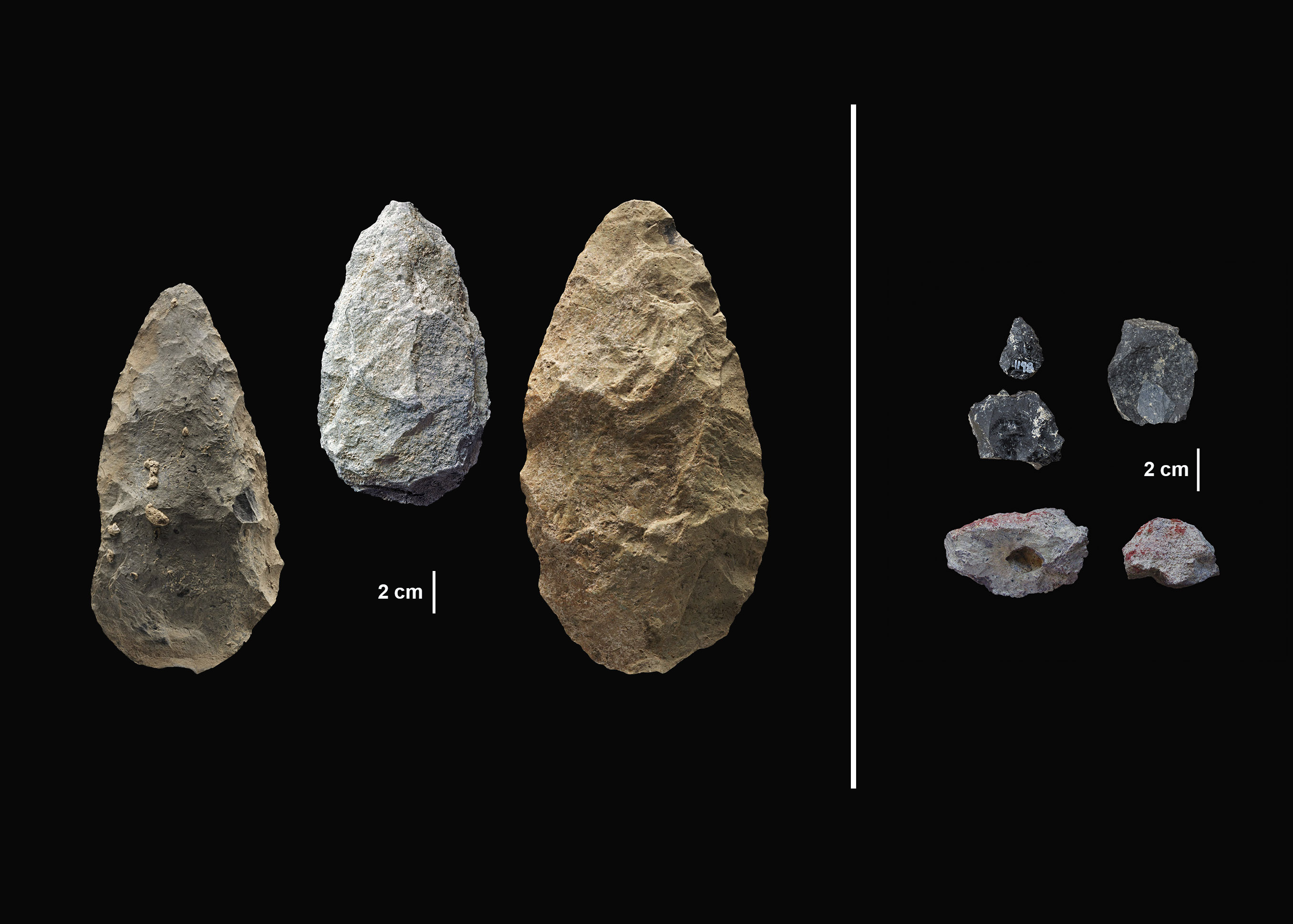 In the second study, paleoanthropologist Alison Brooks details how this community transitioned to these specialized tools. The team explored five sites spanning a period between 500,000 to 298,000 years ago. The more recent sites, void of heavy axes, featured small advanced tools meant for tipping arrows and spears.

“The question has always been, ‘Are these ancestral Africans like us behaviourally as much as they look like us in terms of morphology (physical form).” — John Shea, anthropologist

Most contained obsidian, a sign that early humans traveled great distances to bring home raw materials for toolmaking. Since trading was uncommon at the time, this behavior was likely an adaptation to the environmental instability.

But it seems they imported much more than just obsidian. Brooks found colorful rocks, called chert, that release pigments when bored into. Bright ochre and midnight black could have been used to mark skin or landscape to communicate about trade or territory – intelligent behaviors that characterize the modern human, Potts said.

“The question has always been, ‘Are these ancestral Africans like us behaviourally as much as they look like us in terms of morphology (physical form),” said Stony Brook University’s John Shea, who wasn’t involved in the study.

The Smithsonian team found small stone points made of non-local obsidian at their Middle Stone Age sites. They also found larger pieces of obsidian at Olorgesailie, which has no obsidian source of its own. These findings suggest trade networks were established to move stone across long distances. Photo by Human Origins Program, Smithsonian

Shea said these new studies push back the earliest record of modern human behavior, adding that sophisticated behaviors previously attributed to Europe’s early humans “actually have very deep roots in Africa.” Potts agreed: “Both trade as well as the ability to communicate means you have a heightened ability to plan.”

The third study, led by geologist Alan Deino, involved a new technique used to pinpoint the dates of these dramatic changes. He removed crystals from volcanic layers and compared the rate of decay of two chemicals — radioactive potassium and argon gas. By doing so, one crystal at a time, his team determined that stone tool making in the Early Stone Age– a technological period known as Acheulean industry — featured heavier, less sophisticated axes from 615,000 to 499,000 years ago. But these heavy axes disappeared in the Olorgesailie Basin by 320,000 years ago, predating advances by Homo sapiens that were found later elsewhere in the Middle Stone Age.

This technological transition coincides with the environmental changes observed by Pott’s team.

Fast forward to present time. Potts described the Earth’s current condition as “an environmental experient that has never been tried before,” with our own species driving the change. But he sees hope in this evolutionary story. Ancient signs of people relocating to find resources means humans were hardy and adaptable in the face of environmental upheaval.