El Niño, or the El Niño–Southern Oscillation, is an occasional warming event in the Pacific Ocean that can initiate weather-related havoc across the U.S. Now, it has a new cousin. By examining 38 years of weather, atmospheric scientists have identified an ocean temperature anomaly — the Pacific Extreme Pattern — that can predict droughts on the East Coast up to two months before they hit. The team plans to build an alert system based on these findings, which could allow cities to prep for life-threatening heat waves, while also reducing people’s electric bills.

A weather forecast, like one on The Weather Channel or Weather.gov, is somewhat deterministic, said Karen McKinnon, an atmospheric scientist at the National Center for Atmospheric Research. A weather report can say if tomorrow’s high will be 55 degrees with a high degree of accuracy. McKinnon and her colleagues work with subseasonal forecasts that can peer further into the future.

“Rather than making a five- to 10-day forecast, we’re looking about seven weeks out. Rather than saying the high is going to be 55, we’re talking about the shifts in the odds of certain events or an increase in their probability,” said McKinnon, who co-led the study published today in Nature Geoscience

McKinnon and her colleagues discovered Pacific Extreme Pattern by looking at summer weather patterns across the U.S. between 1982 and 2015. Their analysis focused on the hottest days, namely those above the 95th temperature percentile. They observed that the continental states could be divided into five regions — the maritime west coast, the arid interior west, the semiarid and subtropical southwest, tropical Florida, and the humid and continental eastern U.S. — based on when extreme heat hit.

Heat waves strike by region, according to new findings in Nature Geoscience. The study looked at temperature data from weather stations (dots) across the continental U.S. When extreme heat hits, it tends to be regional, based on 32 years of temperature measurement. Photo by McKinnon KA et al., Nature Geoscience, (2016)

Next, they turned their gaze to the Pacific Ocean, where they found a pattern in sea surface temperatures in the late spring or early summer that preceded the hottest days of the year in the continental eastern U.S. This pattern encompasses a gigantic patch of water that extends laterally from West Coast to China. Its northeast corner falls near the coast of Washington, while its northwest corner tucks into the sea of Okhotsk near Japan. The Pacific Extreme Pattern’s lower border runs near the same latitude as Guatemala. That’s in contrast to El Niño, which only involves tropical water.

Don’t think of this phenomenon as the entire Pacific Ocean warming up past a single tipping point. It’s more like certain segments of the ocean fluctuate at different times, as if performing a liquid dance.

“The pattern includes warmer-than-normal sea surface temperatures in the southern part of the Pacific Extreme Pattern and then cooler than average temperatures just northeast of this warm spot,” McKinnon said.

Based on the historical data and McKinnon’s model, if a Pacific Extreme Pattern occurred 50 days out, the odds of an East Coast drought increased from 1 in 6 to about 1 in 4. At 30 days out or closer, the scientists predict an increase in the odds to better than 1 in 2 that a heat wave would strike on a particular day. These outcomes beat current predictions models.

They tested their model by rewinding to 2012, when the last major drought across the eastern U.S. killed 123 people. The drought devastated crops across the Midwest, and overall, created $31.2 billion in damages. It was the most extensive drought since the 1930s. Here’s what happened, from a climate prediction perspective, according to the paper:

On May 17, [2012], the Climate Prediction Center’s seasonal forecast was for normal June – August temperatures for the northeast and Midwest, and a 33 – 40 percent chance of above normal temperatures for the southeast. Instead, the summer featured three major heat events, beginning on June 25, July 16 July and July 29.

If 2012 climate models had been based on Pacific Extreme Pattern, they could have spotted the oncoming drought by May 15, according to the study. The study found, in contrast, that U.S. rainfall patterns couldn’t provide the same readout for a drought.

“It’s well known that changes in the North Pacific can affect weather in North America. Think of ‘The Blob,’ the anomalous warmth that dominated the northeastern Pacific in 2013-14 and 2014-15 and almost certainly contributed to the worsening of the California drought,” Brad Rippey, a meteorologist at U.S. Department of Agriculture, told NewsHour in an email. “Folks in the academic world are always looking for correlations that might help to fine-tune long-lead outlooks – and I imagine this might be one of them. It seems like it could be useful as a forecast tool for a relatively small geographic area. 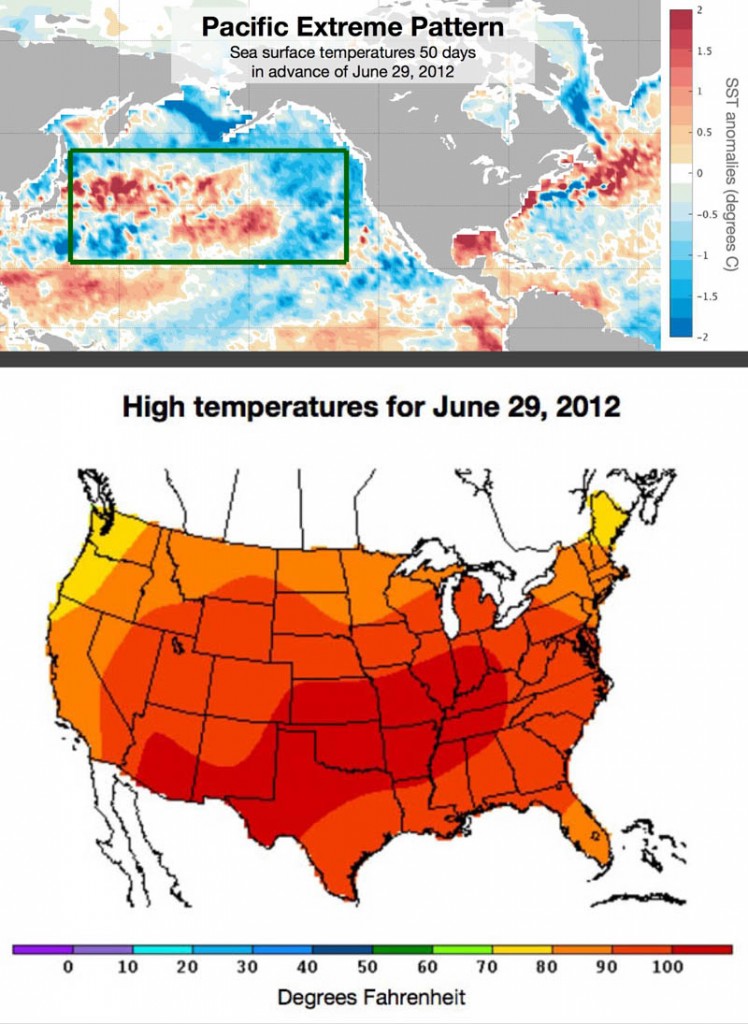 Top: Sea surface temperature anomalies in the mid-latitude Pacific 50 days in advance of June 29, 2012. The pattern inside the green box resembled the Pacific Extreme Pattern, indicating that there would be an increase in the odds of a heat wave in the eastern half of the United States at the end of June.
Bottom: June 29, 2012, was the hottest day of the year in the eastern United States. The hot temperatures in late June and early July were part of an extraordinarily hot summer that saw three heat waves strike the country. Image courtesy of Karen McKinnon, NCAR. Map courtesy of the National Weather Service’s Weather Prediction Center.

Current seasonal forecasts are predicting one of the hottest summers in recent history for 2016, according to Climate Central, but temperatures in the northern Pacific suggest a more moderate summer, according to McKinnon’s model.

“This is a good case study,” Michael Ventrice, an operational meteorologist with the Weather Company, told Climate Central.

However, McKinnon counters that it’s too early in the year to activate the model. She and her colleagues at the National Center for Atmospheric Research plan to do so in May, when they release a web version of the model, so people like city planners and farmers can use the predictions to prep for droughts. If a drought is pending, for instance, then utility companies can plan ahead and make sure that they don’t take any plants offline, in order to avoid brownouts and blackouts.

“Heat waves can be associated with negative health conditions, especially for people without air conditioning. A lot of major cities provide cooling rooms for those who don’t have A/C,” McKinnon said. “We’re hoping that if city leaders know these events are more likely to happen, then they’ll be able to ensure sufficient resources for these cooling rooms.”

Her team, however, has settled on a name:

Left: A wildfire burns near the town of Noble in Cleveland County, south of Oklahoma City, Oklahoma August 4, 2012. Wildfires burned out of control in Oklahoma, destroying homes and shutting down highways, after the state suffered from 18 straight days of 100-plus degree temperatures and persistent drought. Photo by Garett Fisbeck /REUTERS