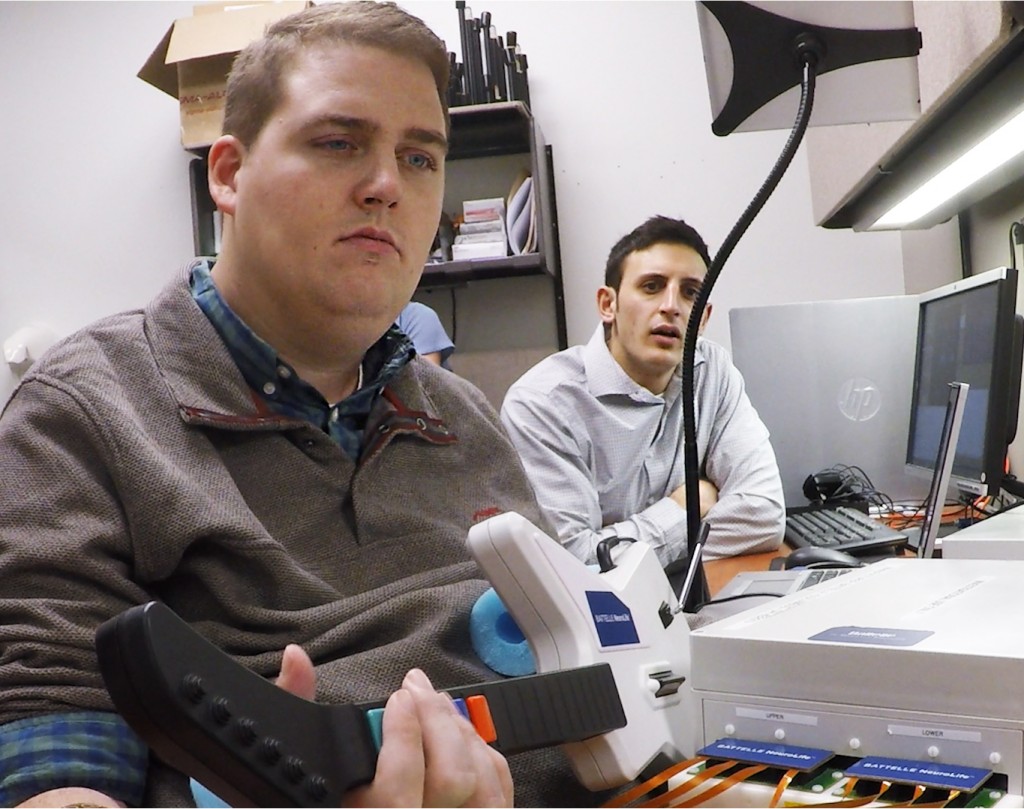 Nick Annetta, right, of Battelle, watches as Ian Burkhart, 24, plays a guitar video game using his paralyzed hand. A computer chip in Burkhart`s brain reads his thoughts, decodes them, then sends signals to a sleeve on his arm, that allows him to move his hand. Photo by Ohio State University Wexner Medical Center/ Batelle

Six years ago, while swimming in the ocean surf, 24-year-old Ian Burkhart lost the ability to control his hands and legs. He dove under the surf, and the waves shoved him into a sandbar. But today, thanks to a computer chip implanted into the motor cortex of his brain that decodes his brain activity, he can move his fingers again. He can pick up a glass and pour from it. He can even play Guitar Hero. It’s the first time a brain-machine interface has restored muscle control to a paralyzed human being.

But Burkhart can only perform these activities while hooked up in a lab. While this represents a tremendous advance, it is still a far cry from restoring everyday movement to the millions of disabled across the globe. The project’s findings are published today in the journal Nature.

Burkhart’s situation differs from previous computerized neuroprosthetics, which have allowed patients to manipulate cursors on a computer screen or guide robotic arms. Rather than manipulate a digital or mechanical prosthetic, his implant bypasses his spinal injury by feeding his brain signals directly into an electronic sleeve, which in turn, allows movement of his natural arm.

“There’s technology that links brain signals to complex forms of exoskeletons,” said Ali Rezai, study co-author and director of Ohio State University’s Center for Neuromodulation. “Our approach wanted to move toward as minimally invasive as possible, the least number of surgeries, and to provide…in this case, a wearable, garment-like device that can be worn by the patient.”

Burkhart’s implant consists of a chip, smaller and thinner than a dime, that projects 96 wires — electrodes — into the outer layers of the brain.

Picture a microscopic hairbrush with tiny metal teeth. These electrodes scan impulses from hundreds of neurons in the same brain area that would control his hand. A metal casing protects the computer chip when Burkhart isn’t connected to the sleeve.

“I don’t really notice it that much anymore. I might notice when I’m having someone help me get dressed in the morning, pulling my T-shirt over my head or something like that,” Burkhart said. “It’s about the size of a few coins stacked on top of your head that’s sticking out that has a protective cap over it. So it’s really not too obtrusive to my everyday life.” 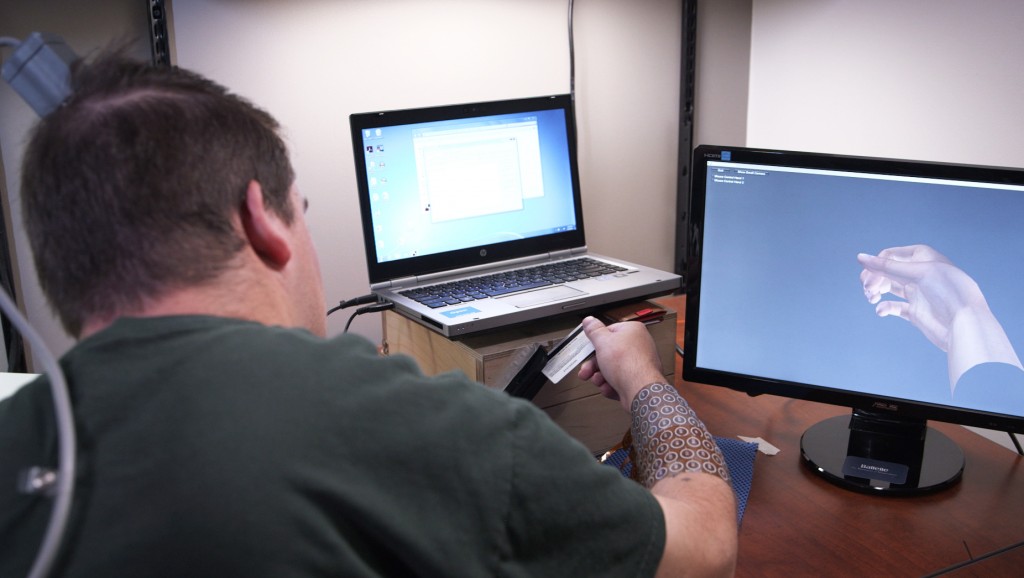 Swiping a credit card was something Ian Burkhart, 24, never thought he would do again. Burkhart was paralyzed from the shoulders down after a diving accident in 2010, but regained functional use of his hand through the use of neural bypass technology. Photo by Ohio State University Wexner Medical Center/ Batelle

In the lab, scientists plug a gray cigarette-box-sized device into the chip in Burkhart’s brain. This box contains electronic amplifiers that decode the neural signals picked up by the fine electrodes in the brain. A computer uses machine-learning algorithms, which decipher and remember nerve patterns, in order to control an electronic sleeve. The sleeve beams electric pulses onto 130 spots on Burkhart’s arm, forcing his muscles to move in a fluid manner.

“The machine and the person are actually learning together,” said bioengineer Chad Bouton, who co-developed the new implant while working for Battelle Memorial Institute in Ohio. “There are millions of different ways, millions of combinations you could come up with in connecting the neurons and reconnecting those neurons to the muscles.”

The researchers used machine-learning algorithms to unpack these patterns, which are unique to each person.

“You’re not going to be looked on as, “Oh, I’m a cyborg now because I have this big, huge prosthetic on the side of my arm,” Burkhart said. “It’s something a lot more natural and intuitive to learn, because I can see my own hand reacting when I think of something, and it’s just your normal thoughts.”

In 2004, a survey asked 681 people with paralysis — quadriplegics (like Burkhart) and paraplegics (those with leg paralysis) — to rank the functions that they would most like to have restored. Recovering motion to the hands and arms topped the list.

“At the top of that list for people who were unable to use their arms and legs was arm and hand function,” said neurologist and engineer Leigh Hochberg of Brown University, who wasn’t directly involved with the Burkhart study. “Being able to restore those abilities with one’s own limbs is really in many ways the dream for the research and the hope for millions of people with paralysis.”

He should know. Hochberg is one of the principal investigators for BrainGate, a 20-year-old neuroengineering effort that developed the technology behind Burkhart’s implant.

Hochberg spoke highly of the study, but also cautioned that the research is preliminary: “This is really early research. It is not something that turns around tomorrow and becomes a useful clinical product that would help people with paralysis.”

That’s true for a number of reasons. For one, Burkhart can only use the electronic sleeve and the rest of its hardware inside a lab. Once there, he has to retrain his brain to operate the sleeve.

“Initially we would do a short session, and I would feel like I was completely and mentally fatigued and exhausted. Right along the lines of taking a six or seven-hour exam,” Burkhart said.

The reintroduction period has gotten much easier, he said, so it takes less time to get re-acquainted and learn new tasks. The machine-learning algorithms aid this recalibration by adapting as his mind adjusts.

However, his body to some degree is working against the foreign electrodes in his head. Their ability to pick up nerve signals has faded over time.

“We’ve had to really develop new ways to continue to acquire a good signal, and one that can really provide this ability to have natural movement,” said Bouton, who is now with Feinstein Institute for Medical Research in New York. “What we’ve done is listen to larger groups of neurons. These neurons that are in and around this electrode array in the brain. That’s worked out very well. Those types of signals are looking still very good over the almost two-year period for this study.” 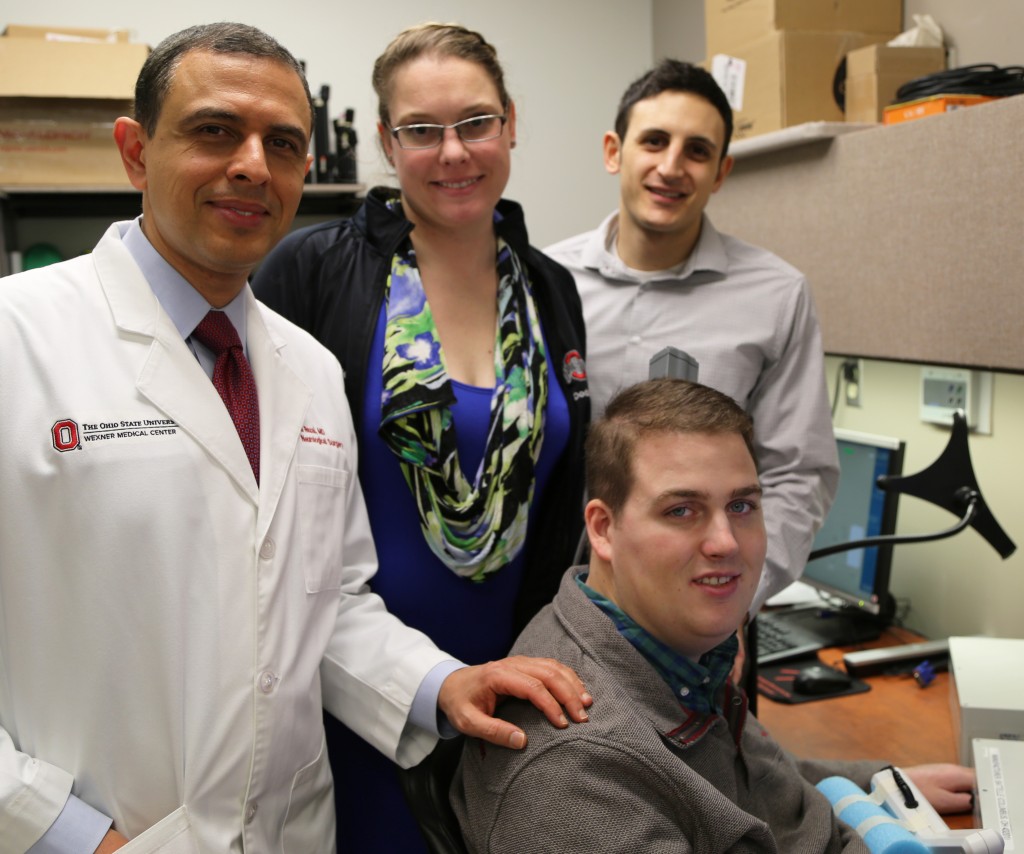 Another barrier to widespread use is the physical limit of the hardware. Plugs and wires are bulky and somewhat dangerous if they bump into something else.

One of Hochberg’s colleagues at Brown University — Arto Nurmikko — has developed a wireless prototype of the BrainGate implant, but so far, it’s only been tested in nonhuman primates and pigs. However, this WiFi-based device has gotten past a major hurdle: bandwidth.

Implants like Burkhart’s beam a gigabyte of data every three minutes, according to Battelle electrical engineer Nick Annetta. That’s a tremendous amount of data being tossed back and forth, and it needs to happen in the split seconds required to move an appendage. Nurmikko’s WiFi implant can transmit neural data at 24 Megabits per second, which is only about twice as fast as the best LTE network for a smartphone.

“There’s still years of neuroscience, of engineering and of clinical research that needs to be done to get to the point that we all hope this gets to — being a valuable device that helps people with paralysis,” Hochberg said.

But in the meantime, Hochberg believes tremendous credit is due to the participants in this research. He said patients enroll in these trials, whether BrainGate research or others, not because they’re hoping for personal benefit, but because they want to help develop and test a system that will help other people with paralysis in the future.

Rezai agreed: “We’re here because of Ian and millions of patients like Ian who have physical disabilities. And the success of the study is due to Ian. He’s the rock star here.”