On April 12, 2011, a 59-year-old woman with a sensor implanted in her brain picked up her cinnamon latte with a robotic arm, brought it to her lips and took a sip through a straw using only her thoughts. It was the first such movement Cathy Hutchinson had made in 15 years after a severe brain-stem stroke caused complete paralysis from her neck down.

Tiny electrodes implanted in their brains detected when neurons were firing and allowed them to control two different robotic arms.

In the case of both study participants, although the stroke had damaged the cortical pathway connecting electrical impulses from the brain to the spinal cord, their brains had never forgotten how to send the signals. The experiment is the first peer-reviewed demonstration of reach and grasping tasks using a robotic device; the results were published Wednesday in the journal Nature.

“When these people think about moving, the brain elicits patterns that look to us like what should happen when you actually move,” said Brown University’s John Donoghue, the senior author of the study. “Of major importance is that the motor cortex continues to operate in a normal way that allows us to tap into it even years after the stroke or spinal cord injury has occurred.”

The motor cortex is a strip about as thick as an orange peel that runs from the top of the head to the jawbone. Neurons within this region fire electrical signals, which get sent through the cortical motor pathway to the spinal cord and control movement of the legs, arms and face. Spinal injuries and strokes disrupt that process.

“A brain-stem stroke catches fibers along that pathway,” Donoghue said. “And when that fiber pathway is cut, your ability to make movements is seriously compromised.”

This finding follows a 2006 study also published in Nature that found that similar electrode implants could enable paralyzed participants to point and click a computer cursor. But the latest movements — up, down, right, left and grasping — show a much more sophisticated control of a complex device, he said. 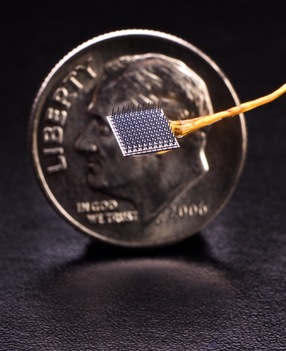 Here’s how it works. Scientists surgically implant a sensor the size of a small pill into the brain’s motor cortex. Ninety-six hair-thin electrodes connected to that sensor pick up signals from nearby neurons. The thin cables carry those signals to external computer processors. The computers map the pattern of impulses and translate them into command signals that can be used to operate the robotic devices.

Researchers began by controlling the robotic arms while directing the subjects to imagine they were moving the arms themselves. A preprogrammed computer recorded the electrical patterns in their brains as they imagined the movement and fed those patterns into a model. That model was then translated into personalized commands, making it possible for the subjects to move and position the arm and pick up objects.

“A pattern emerges as you think about making those actions,” said Leigh Hochberg, neuroengineer and critical-care neurologist with Massachusetts General Hospital and a study author. “We found in fact that there’s lots of information about how we want to position a hand in space, how fast you want to move it, and how to open and close your hand, and we could potentially decode all that using this type of technology.”

Although neither of the patients can talk, Hochberg read a quote from Hutchinson — the woman who picked up the coffee mug — during a conference call on Tuesday: “I think about moving my hand and wrist,” she said. “I’m right handed, so it’s very comfortable and feels natural to imagine my right hand moving the direction I want the robotic arm to move.”

The device is still crude and has a long to way to go before it can give a paralyzed patient any real function. The biggest barrier is not having a fully implantable system, Donoghue said. The hope is to one day connect the brain directly to the limb and to do so with smaller, fully implantable wireless devices.

The ultimate goal, said Donoghue, is “when somebody who has lost mobility can fully interact with his or her environment without anyone knowing they’re employing a computer-brain interface.”

Margaret Warner discussed the hopes for the technology with Dr. Leigh Hochberg of Massachusetts General Hospital on Wednesday’s PBS NewsHour. Watch the video below.

Last year, Miles O’Brien reported on these and other advances in prosthetics. You can find his report here.

Correction: An earlier version of the story said that Bob was paraplegic. He is quadriplegic.