Graduate students are underpaid and overstressed. Can academic unions change that?

When Megan started her graduate program in biology in 2013, she was ambitious — hungry, she calls it.

“When you’re a grad student, you set yourself up to build yourself up, because you want it so bad. You go into it hungry,” she said.

But over the course of her training, she started to experience anxiety attacks, migraines and insomnia. To relieve stress brought on in part by a long commute, Megan, who asked that her last name be omitted because of concerns about privacy and possible negative effects on her career, moved closer to her campus in Georgia — but that also meant living an hour and a half away from her husband. She started seeing her physician and therapists, who prescribed medication. Though she was on her husband’s health insurance, the copay and other medical expenses cost her an estimated total of $3,000. Her annual stipend was $17,500.

Megan’s experience is common among those pursuing degrees beyond undergrad. In March, a Belgian study found doctoral students experience mental illness at 2.5 times the rate of other people with college degrees or those currently enrolled at university. Of the 3,659 students surveyed in Flanders, Belgium, half had experienced psychological distress; a third were at risk for developing a psychiatric disorder. A similar, earlier study by the American Psychological Association found up to a third of all graduate students were dealing with mental illness, too.

A Belgian study found that doctoral students experience mental illness at 2.5 times the rate of other people with college degrees or those currently enrolled at university.

Many graduate and doctoral students vie to become postdoctoral researchers — “postdocs” — on their quest to attain professorships. But the postdoc and student population has greatly outpaced the growth of tenure-track positions in recent years. According to a 2015 study by the National Institute of Health, postdoctoral researchers made between $42,840 and $56,376 annual median salaries, depending on the year. A 2010 report found 360,000 of the 22 million Americans with graduate degrees were on food stamps.

As a result, early career academics can linger in a stressful limbo. Many doctoral students expect to become tenured professors, and view themselves as failures if they don’t obtain the coveted positions, said Ghent University sociologist Katia Levecque, who led the Belgian study published in Research Policy.

With low pay and high expectations, it’s little wonder these students are susceptible to depression, substance abuse and anxiety, as Levecque’s study suggested. But some believe these students could see relief through academic unions. 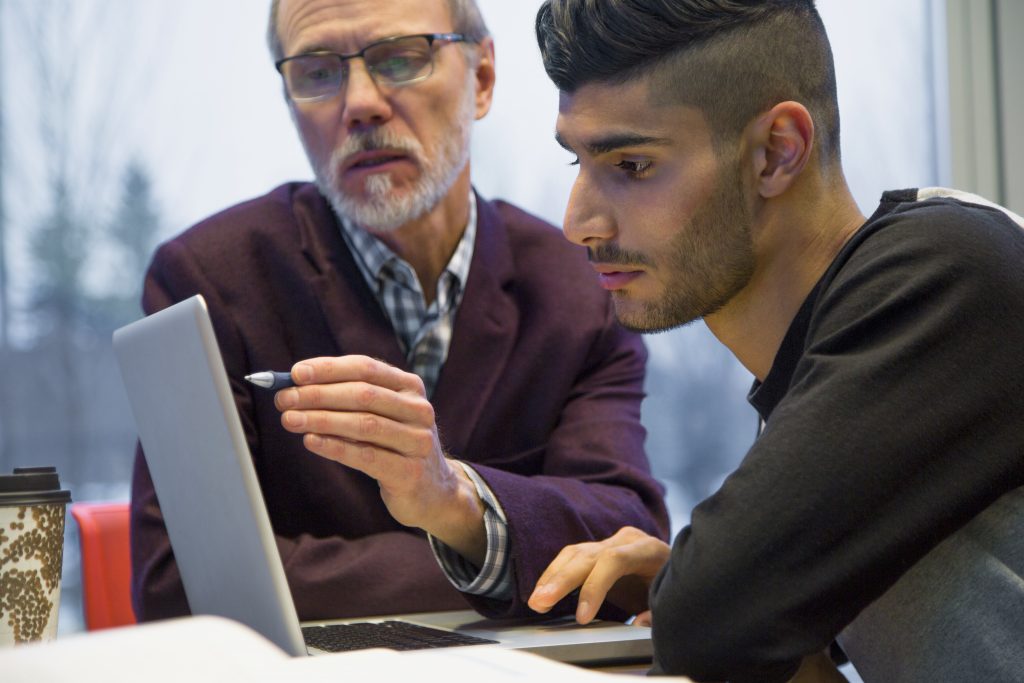 “Many doctoral students expect to become tenured professors, and view themselves as failures if they don’t obtain the coveted positions.” Photo by Hero Images/via Getty Images

UAW Local 2865, for instance, which represents all University of California teaching campuses, has achieved a host of guarantees for 16,000 student workers since it became fully recognized in 1999. Those benefits include child care reimbursement, a 17 percent wage increase over four years and protections against arbitrary firing, discrimination and harassment. Dues-paying members of the union get to vote on initiatives, but the protections extend to all eligible student workers at the system’s unionized institutions.

“As a union for post-doc researchers, we are able to negotiate for mental health packages, and there is a way to work with university administration to optimize health care benefits,” said Anke Schennink, veterinary geneticist and president of postdoctoral union UAW Local 5810 at the University of California Davis.

But not everyone thinks these unions work. Graduate students at Cornell University founded Atwhatcost.org, wherein they detail their issues with high union dues and potential conflicts with professors, along with a desire to focus on research, not advocacy.

How can universities improve the mental health of young academics?

Both Schennink and Levecque argue several reforms are needed to improve the mental health of young academics. One is identifying and acknowledging the problem exists in order to de-stigmatize the idea of seeking help. Another is reducing stressors that contribute to breakdowns in the first place. Megan said that higher pay and work-hour caps would have helped her. Instead of working through the night, she would have liked to go home to her family.

“Me and my group of friends are all like ‘yeah, we all have panic attacks. And we all have depression.’ Like ‘what meds are you on? Oh, that’s got fun side effects,’” Megan said. “We just talk about it casually and then we laugh. Like, man, we’re messed up. We’re all just nodding and crying inside.”

Senior officials in academia often take these issues for granted. In March, an anonymous university employee wrote a column for the Guardian called “There is a culture of acceptance around mental illness in academia.” Graduate students lament about the problem in online forums. Blogs posts about graduate and doctoral school include a number of jokes about falling asleep in coffee and regretting life decisions.

Levecque said most doctoral students in Belgium are employed by the university and represented by unions. They receive competitive wages and labor law protections. Still, Levecque cited common complaints by Belgian doctoral students of work overload, unrealistic demands, lack of job security and lack of a work-life balance as issues that threaten mental wellness.

The unemployment rate among postdoctoral scientists and engineers on the whole is 2.1 percent. Photo by nimis69/via Getty images

Levecque sees another cultural contributor to stress: Many doctoral students expect to become tenured professors, and view themselves as failures if they don’t obtain the coveted positions.

Fifty-six percent of people who begin a doctoral program hope to become a tenured professor, according to a survey of 3,208 postdocs conducted in 2012, but only 20 percent land those positions. However, the unemployment rate among postdoctoral scientists and engineers on the whole is 2.1 percent, according to a 2012 National Science Foundation survey.

Megan says that she’s so burnt out, she definitely won’t be pursuing a professorship, or even a career in her current field. She’s considering a job in procedural work, where she can make more money with less grandiose expectations.

“I don’t mind working hard. I work really hard,” Megan said. “And I’m a believer in the American Dream, if you work hard enough good things will happen for you and you can eventually get where you want to be. But this whole experience just made me feel like a non-person.”

Correction: This story has been updated to reflect that Megan began a graduate program in 2013.

Left: In March, a Belgian study reported that doctoral students experience mental illness at 2.5 times the rate of other people with college degrees or those currently enrolled at university. Photo by Larry Downing/Reuters