Pluto’s heart may conceal an ocean

Astronomers have just found the best evidence yet of an entire ocean in an exceedingly unlikely place—the dwarf planet Pluto, in the dark hinterlands of the solar system. There, nitrogen and other “volatile” gases freeze solid in the cryogenic conditions, and water turns to rock-hard ice. For decades scientists have theorized how that ice might act as an insulator, preserving vestiges of warmth and moisture deep within Pluto and other objects so far from the Sun. But there was not enough data to confirm such wild speculations.

All that changed when NASA’s New Horizons mission flew by Pluto last year. Amid the dwarf planet’s many wonders, the brightest and most striking feature the probe saw was a 1,600-kilometer-wide heart-shaped plain sprawled across the distant world’s surface. The heart is dubbed “Tombaugh Regio” after the world’s discoverer, American astronomer Clyde Tombaugh.

Fissures and fractures around Tombaugh Regio and other parts of the planet suggested a subsurface layer of watery slush might be slowly solidifying, breaking up the surface as it expands like ice cubes in a freezer—but other, drier possibilities could also explain such cracks. Now, however, two studies published Wednesday in Nature are strengthening the case that Pluto’s icy heart contains a warmer, wetter inner world.

“If we’re right, oceans in the outer solar system are common, and other objects of similar size to Pluto there probably also have subsurface oceans,” says Francis Nimmo, a lead author of one of the studies and planetary scientist at the University of California in Santa Cruz.

The new evidence for Pluto’s ocean comes from the 1,000-kilometer wide western lobe of Tombaugh Regio, a region informally called “Sputnik Planitia.” Sputnik Planitia is an oddity compared to the rest of Pluto’s craggy, crater-pocked, multibillion-year-old surface, covered in bright ice that is relatively fresh and crater-free. Scientists have explained Sputnik Planitia’s youthful appearance by positing that it is an ancient impact basin—a giant crater filled with thick floes of younger ice that, driven by heat seeping up from below, churn and refresh the surface. 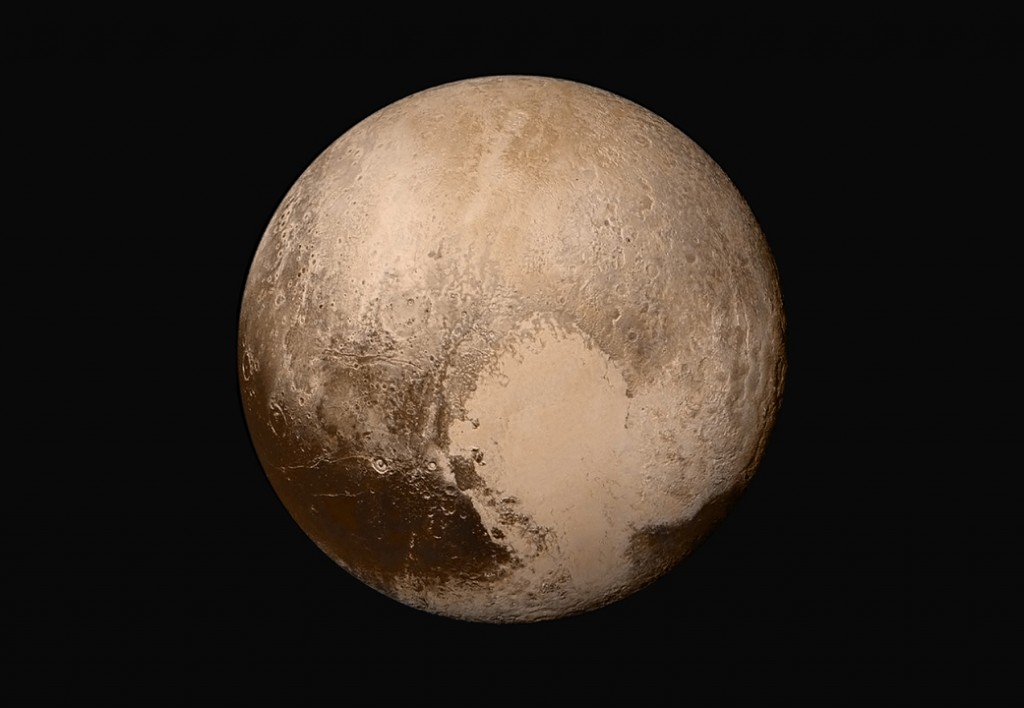 “If you drew a line from the center of Charon through the center of Pluto, and through the far side of Pluto, it would come out very near Sputnik Planitia,” says James Tuttle Keane, a doctoral student at the University of Arizona in Tucson and lead author of the other Nature study.

The chance of a giant impact producing a crater so precisely aligned with Charon are vanishingly slim, Keane says, so he and his team (as well as Nimmo’s) went searching for another explanation. They used data from New Horizons and ground-based telescopes to create models of how Sputnik Planitia’s formation could influence Pluto’s interior and orbital evolution.

Both teams found that the strange alignment with Charon could be best explained if Sputnik Planitia is much more massive than surrounding regions on Pluto. Over millions of years, this “positive mass anomaly” caused the entire planet to tilt askew into its present alignment with Charon, similar to how a Frisbee with coins taped to one edge will tumble over instead of smoothly spinning. Modeling this process, Keane’s team found that if Sputnik Planitia had been formed to the northwest of its present position, the stresses from its reorientation toward the equator would create networks of faults, canyons and mountains that closely match those observed by New Horizons.

According to Nimmo’s team, a subsurface ocean is the most plausible reason for Sputnik Planitia to be heavier than its surroundings. The region’s birth in a giant impact must have excavated so much ice from Pluto’s surface that watery slush welled up from deeper within, plumping up to form a heavy, planetary-scale bruise beneath the thinner crust. As surface ice accumulated atop this bruise, Sputnik Planitia grew heavy enough to reorient Pluto’s spin.

Nimmo’s models suggest Pluto’s ocean is about 100 kilometers deep and billions of years old, kept liquid by large amounts of ammonia, a natural antifreeze prevalent in icy bodies of the outer solar system. While Pluto’s putative ocean could in principle support life, it is probably locked beneath perhaps 200 kilometers of ice and very far from Earth, making it a far less appealing target for astrobiological studies than other, closer subsurface oceans in the solar system, such as those that exist within the icy moons of Jupiter’s Europa and Saturn’s Enceladus.

David Stevenson, a planetary scientist at the California Institute of Technology in Pasadena who was not involved with either team, calls both studies “interesting and plausible” boosters to the decades-old idea that Pluto has an ocean.

While the case for Pluto’s ocean is increasingly airtight, Keane and his colleagues are less sanguine about the possibility that it still lingers in the dwarf planet’s depths—their models suggest the world’s surface fissures are also consistent with a subsurface body of water that froze completely long ago. In this case, much of Sputnik Planitia’s heaviness and its tweaks to Pluto’s spin could alternatively be explained just by the gradual accumulation of surface ice within the giant crater. This process would play out during Pluto’s centuries-long seasons stretched across billions of years, as summertime plumes of gaseous nitrogen freeze out as snow to become trapped as wintertime ice in Sputnik Planitia’s giant basin.

“We remain a bit agnostic,” Keane says. “We’re not certain if there is enough data to really tell the difference [between scenarios.]”

Even if Pluto’s ocean is really now just ice, Keane says, these new studies of Sputnik Planitia reveal a powerful and unique feedback between Pluto’s climate and orbital evolution that could also operate on other icy worlds in the outer solar system.

“This idea of a whole planet being dragged around by the cycling of volatiles is not something many people had really thought about before,” Keane says. “The movement of volatile ices across [Pluto’s] surface is continually resurfacing the planet and controlling its orientation—past, present and future. Pluto may still be moving and wobbling around today due to the transport of volatiles, and this same process may be responsible for continuing geological activity on other worlds.”

This article is reproduced with permission from Scientific American. It was first published on Nov. 16, 2016. Find the original story here.

Left: Sputnik Planitia, the western lobe of Pluto’s icy “heart,” is a giant basin that probably formed from a powerful impact northwest of its present location. It reoriented to is current position near Pluto’s equator as its basin filled with volatile ices, potentially aided by the upwellings of a subsurface ocean deep within the dwarf planet. Photo by James Tuttle Keane