Police militarization neither reduces rates of violent crime nor changes the number of officers assaulted or killed, according to a study of 9,000 law enforcement agencies in the U.S. The study is arguably the nation’s first systematic analysis on the use and consequences of militarized force.

In at least one state — Maryland — police are more likely to deploy militarized units in black neighborhoods, confirming a suspicion long held by critics, the study found.

The study found that merely seeing militarized units can erode public confidence in law enforcement and give off the impression that a police department is overfunded.

Many police leaders view their SWAT teams and other militarized units as a necessity for police and public safety, especially for “high-risk” hostage situations or active shooters. Between 1997 to 2014, the Department of Defense transferred $4.3 billion in military equipment to local law agencies.

But police militarization may also work against law enforcement in the court of public opinion, according to the report published Monday in the Proceedings of the National Academies of Science.

The study found that merely seeing militarized units can erode public confidence in law enforcement and give off the impression that a police department is overfunded.

What the study did

In August 2014, the fatal police shooting of 18-year-old Michael Brown sparked a wave of clashes between protestors and law enforcement in Ferguson, Mo, rife with images of unarmed racial minorities standing against snipers and police atop armored vehicles. The fallout inspired a national conversation about race and police militarization — and sparked the curiosity of a Stanford graduate student.

“I started getting curious about what we actually know about militarized policing, in terms of the claimed benefits and the purported costs that are asserted by critics,” said Jonathan Mummolo, a political scientist who conducted the study and now works at Princeton University.

Critics argue that police militarization preferentially targets communities of color, but in the wake of Ferguson, Mummolo could not find much evidence to back the claim. That’s partially because police recordkeeping on the use of militarized force varies widely from agency to agency

“There’s not a lot of data readily available, and in many cases depending on which type of agencies you’re studying, there may not be any data that exist at all,” Mummolo said. 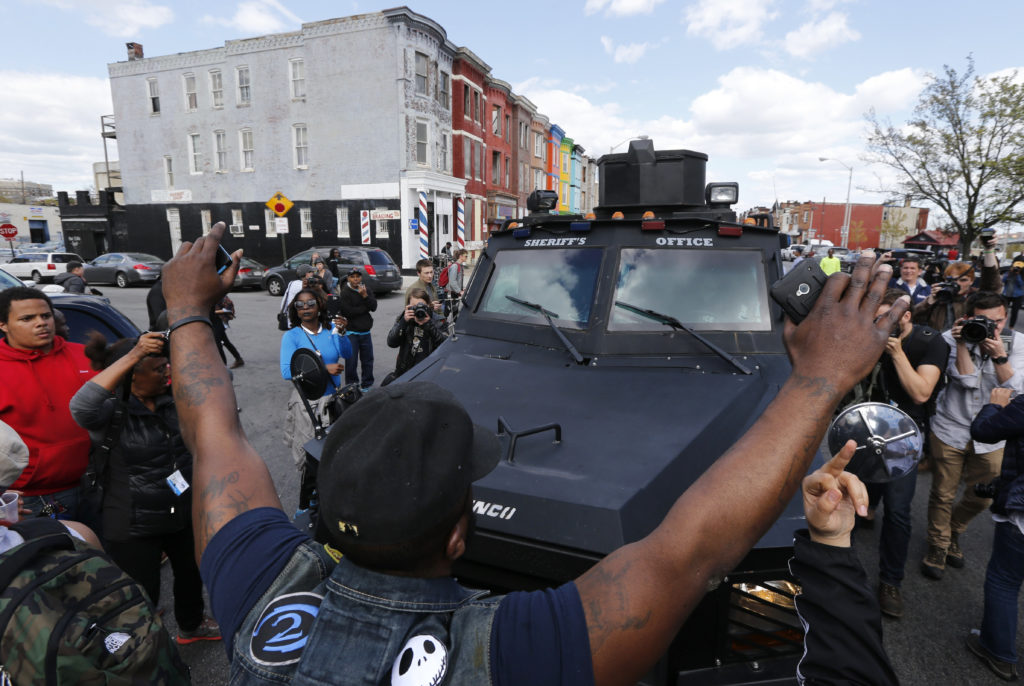 Members of the community try to force a police armored vehicle to reverse back down the street, near the site of a burned and looted CVS pharmacy, in Baltimore, Maryland, April 28, 2015. Photo by REUTERS/Jim Bourg

Maryland provided a rare exception. In 2008, a SWAT team raided the home of Cheye Calvo, the mayor of a small Maryland town whose address was being used in a drug trafficking scheme. Rather than intercept a 32-pound shipment on its way to the Calvo residence, police allowed the package to be delivered and then invaded the mayor’s home, killed his two dogs and interrogated him and his wife on the floor.

It turned out the mayor and his wife were completely innocent, and the event led Maryland to issue a new statute calling on all state agencies to record their SWAT activity from 2010 to 2014.

Mummolo petitioned a number of states for information on SWAT deployments, but “Maryland had the cleanest and consistently coded set of records on SWAT teams — on why they’re deployed, where they were deployed, various actions they took during the deployments,” he said.

The term SWAT brings to mind images of mass shootings or riot barricades.

Yet over the course of four years, Maryland conducted about 8,200 SWAT missions, and the overwhelming majority — 92 percent — were used to execute search or arrest warrants. Only 5 percent involved barricades, which are typically meant for handling armed suspects.

“SWAT teams were initially developed to barricade people with weapons or for hostage crises, said Frederic Lemieux, a criminologist at Georgetown University, who wasn’t involved with the study. “But they have started to trickle down to much more ordinary operations, like drug busts and patrolling areas with high concentrations of crime.” 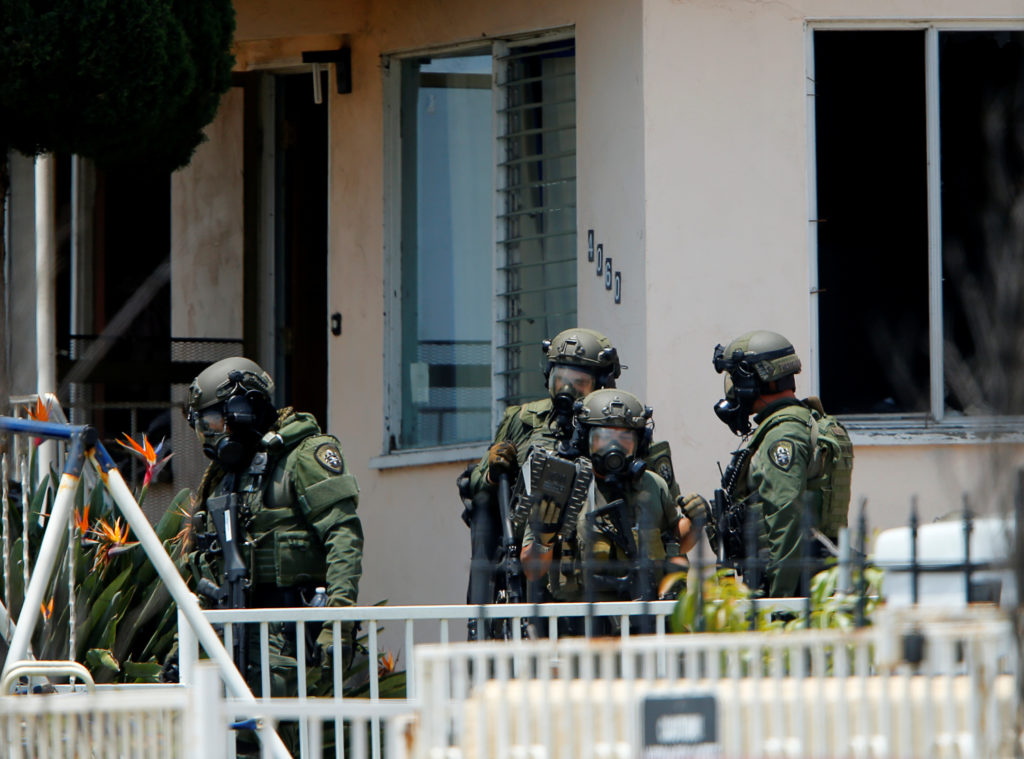 A police SWAT team leaves a home they had surrounded while searching for a second suspect after a San Diego police officer was fatally shot and another was wounded late on Thursday, in San Diego, California, United States July 29, 2016. Photo by REUTERS/Mike Blake

Mummolo still wanted a grasp of police militarization on a national level, and so he sought data from a census of state and local law enforcement that is conducted every four years by the federal government. The survey revealed 9,000 of 15,000 or so law agencies in America had SWAT units at one point between 2000 and 2008. Mummolo then looked at how crime statistics and violence against officers changed before and after those police forces militarized.

The acquisition of SWAT forces had no perceptible impact on police safety — the number of officers killed or assaulted — on a national level.

“There are over a million police officers in the U.S. and the number of officers killed every year is in the low hundreds,” said Mummolo, who previously worked as a police and court reporter for the Washington Post. “So those are really rare events, and it would be hard for anything to have an effect on them.”

This trend aligned with the Maryland data. Shots were fired only 1 percent of the time in Maryland’s raids. Plus, civilians were twice as likely as officers to be injured during Maryland’s raids, though these injuries happened rarely (1.15 percent versus 0.45 percent, respectively).

Police militarization is sometimes viewed as a necessary infringement of civil liberties for the sake of public safety.

But that position is a false choice based on this study, and a common outcome of aggressive police operations, Lemieux said.

“Research into aggressive, military-style tactics — stop-and-frisk, security checkpoints — may have some effect on targeted crimes like weapons possession. But it has very little impact in terms of crime overall,” Lemieux said. “However, “it does impact the feeling of safety and security in the community where those operations are conducted.“ 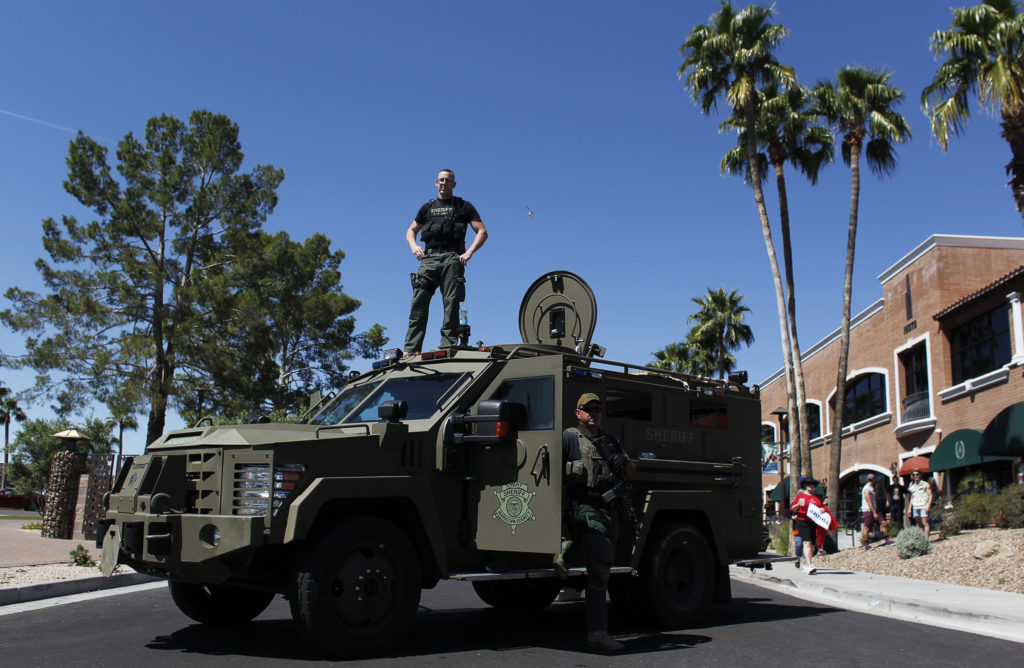 Along those lines, Mummolo surveyed 6,000 people on their feelings toward law enforcement after they each read a mock news article about a police chief looking for a budget increase. All of the news vignettes contained the same text, but the photos differed. Some featured police in normal gear, while others showed militarized police.

The respondents expressed losing confidence in policing, with support from black participants being 21 percentage points lower than white respondents. The respondents were also more likely to perceive a city as being violent if they saw militarized photos.

Overall, the respondents’ support for funding for law enforcement fell by 4 percentage points with police militarization photos, and their desires for police patrols took a 3 percent hit.

Left: Lone activist Ieshia Evans stands her ground while offering her hands for arrest as she is charged by riot police during a protest against police brutality outside the Baton Rouge Police Department in Louisiana, USA, 9 July 2016. A new study found militarized police units are used more often in communities of color. Photo by REUTERS/Jonathan Bachman