Police show more respect to whites than blacks during traffic stops, according to a computer analysis of conversations recorded by police body cameras in Oakland, California.

Videotape footage of police exchanges with people of color has quickly become a mainstay of public — and often viral — stories about law enforcement practices in the U.S. But it remains unclear if these videos represent isolated incidents or a general pattern of racial bias.

By relying on computers, this new study from Stanford University provides an impartial take on policing during traffic stops as well as a new automated method for assessing the behavior of cops based on the language they use.

The Oakland police department’s history of misconduct has made it the subject of federal oversight for 14 years. In 2016, special correspondent Jackie Judd interviewed Jennifer Eberhardt about a two-year-long study into the department, confirming that Oakland officers exhibit significant racial biases in their day-to-day work. 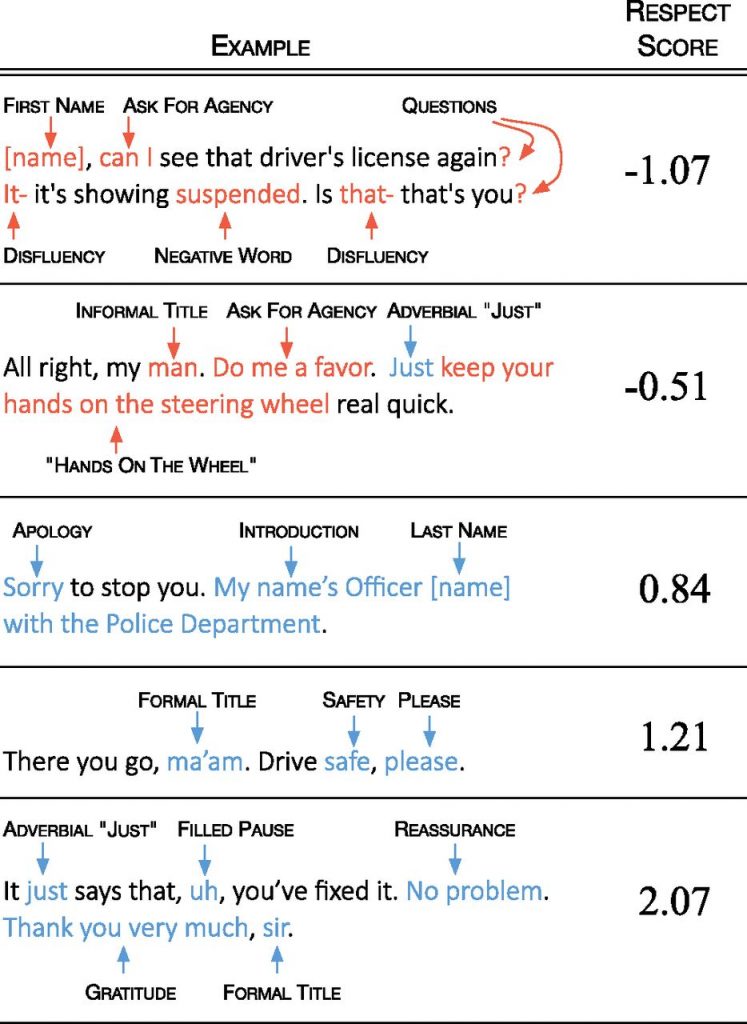 Sample sentences with automatically generated Respect scores. Features in blue were ranked positively in the computer model and connote respect, such as offering reassurance (“no problem”) or mentioning community member well-being (“drive safe”). Features in red ranked negatively in the model and connote disrespect, like informal titles (“my man”), or disfluencies (“that- that’s”). Photo by Voigt et al., PNAS, 2017

Editor’s note: This story was updated to clarify the study’s findings about the motorists’ contributions to the police exchanges.

Left: Oakland Police Department officer Huy Nguyen mounts a Portable Digital Recording Device, a body camera designed to record both audio and video in the field, at the police headquarters in Oakland, California April 14, 2015. OPD was one of the first large organizations in the country to utilize the device, which documents officers' actions and community interactions with police, according to the department. Photo by Robert Galbraith/REUTERS