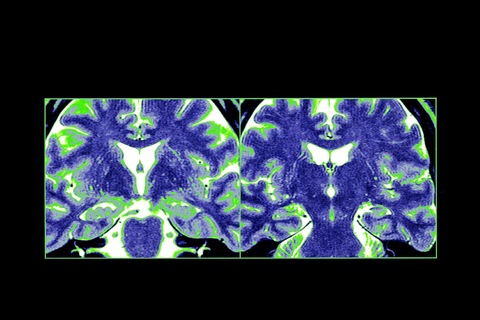 This image shows an MRI of a normal hippocampus.The cortical folds are clearly visible. Photo By BSIP/UIG via Getty Images.

I recall being equally parts shocked and fascinated the first time I learned about the man known as H.M. in my graduate school neuroscience class. At age 27, H.M. had a massive chunk of his brain surgically removed to control severe epileptic seizures that had plagued him since he was 16.

The severe memory loss that resulted — along with his willingness to be intensely studied, scanned and tested — made him probably the most important patient in the history of brain science, and it launched a new era of memory research.

At the AAAS Annual Meeting last week, we were treated to a panel of researchers who had known Molaison personally and who studied him closely before and after his death. They revealed, during a press briefing and panel discussion at the conference, what the famous patient had taught them and how that knowledge has informed memory research today.

It was in 1953 that a neurosurgeon removed most of Molaison’s anterior temporal lobe, including much of the amygdala and the hippocampus, on both sides.

He emerged from the surgery with a specific type of amnesia — he had lost the ability to form new memories. He could remember facts from his life before the surgery — facts about the stock market crash, his family or World War II, for example. And he could converse easily with a new person. But if that person left the room for five or 10 minutes and returned, he would have no recollection of the interaction. In the present day, he did everything as if for the first time.

“I used to tell my students that this operation helped his epilepsy, but at an intolerable price,” said Brenda Milner of the Montreal Neurological Institute and Hospital. Milner worked with H.M. for three decades, and he never learned her name.

Molaison’s brain clinched a hypothesis that the brain’s hippocampus and surrounding cortex were critical to memory, said Suzanne Corkin of MIT, who met him in 1962 and also worked closely with him until his death.

His brain taught them that a person could have horrible, profound memory impairment, but still be intelligent. H.M. had an above-average IQ and “behaved intelligently for his entire life,” Corkin said.

And he taught them that while such amnesia affects certain kinds of memory, such as recollection of unique events and general world knowledge, other types are preserved. Learning motor skills, for example.

The brain, said Howard Eichenbaum of Boston University, creates detailed memories using two types of neurons within the hippocampus: “place cells” and “time cells.” Place cells fire when an animal is in a specific location, and the hippocampus encodes memories by creating a kind of map of space.

“Time cells” complement place cells by firing at specific moments in time, linking together a flow of experiences to compose a specific memory.

Despite the challenges he faced, Molaison was quiet, friendly and surprisingly appeared to be happy, though with occasional outbursts of anger, Milner and Corkin said. He did crossword puzzles every day. He nearly always had a puzzle and pencil with him.

“He was a quiet, friendly, lovely person,” Corkin said. “He had a wonderful sense of humor. He smiled a lot.”

Looking in the mirror and seeing gray hair did not startle him, even though he could never pinpoint his age, she added. And he always seemed genuinely open to being studied.

“Once they know where they’re going, they take off like tiny drag racers. If they were as big as a human, they’d be running at 280 miles per hour.”

Rebecca Jacobson and Patti Parson contributed to this report.