‘Protectors of the coast’ — what the northward march of mangroves means for fishing, flooding and carbon

ST. AUGUSTINE, FLA. — Walking along a wooden path winding through Nease Beachfront Park, Danny Lippi pointed to coastal trees sprouting from the shrubbery around him. The exotic species were brought here by warming temperatures — bringing business opportunities for the local arborist.

“All of these are mangroves,” Lippi said, surrounded by the young perennial plants, blooming with hues of green and golden yellows. “You can actually see that line where the upland vegetation just stops.” 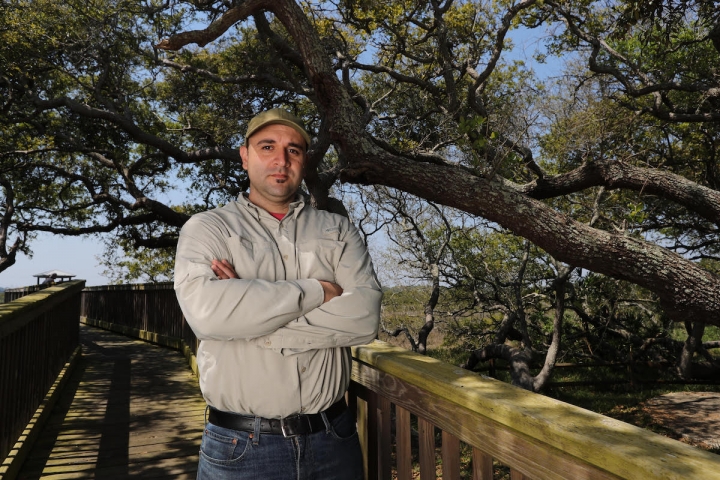 Demand for Lippi’s mangrove trimming service has been growing as the trees have been accumulating northward, starting to block coastal views from Ormond Beach to Palm Coast. Their northernmost limit in the U.S. sits about 70 miles from St. Augustine on Amelia Island, and it continues to shift.

Listen to the WJCT radio story

Ranges of mangroves have naturally waxed and waned over the years, influenced by the weather, but with climate change has come a crucial reduction in crop- and tree-killing freeze events.

The last freeze strong enough to wipe out mangroves took place in 1989. This decline in the number of frosts, coupled with intensifying storms spreading seed-like propagules, is causing the trees to push poleward.

Smithsonian Environmental Research Center research shows mangrove coverage has doubled along Northeast Florida’s coast since 1984. This freshly arrived abundance of mangroves may block waterfront views and squeeze out marsh wildlife, but the tropical trees’ value is celebrated by the state.

Florida legislators regard the trees as storm buffers and coastal habitat, and the Mangrove Preservation and Trimming Actsafeguards mangroves and forbids their trimming by anyone lacking arborist certification. More than 500 violations have been issued since the legislation passed in 1995, with some businesses and residents hit with fines of tens of thousands of dollars each. On average, researchers have estimated mangroves protect $13 billion worth of property in the U.S. annually from storm and flood damage.

The range expansion also carries implications for global climate change. As the trees have spread along the Atlantic coast, new research in the journal Hydrobiologia shows blue carbon, or carbon captured in coastal ecosystems, in the soil beneath them increased by two-thirds over three years — slowing climate change by keeping carbon out of the atmosphere.

“They’re protectors of the coast,” said Smithsonian insect and plant ecologist Ilka “Candy” Feller, as she strode through the Guana Tolomato Matanzas Research Reserve in St. Augustine, one of the sites where she worked on the analysis with colleagues. Dubbed “Mangrove Goddess” by her peers, Feller has been studying the plants for decades. “Belowground there has been this constant accumulation of carbon, and now this blue carbon is considered one of the most valuable assets of mangroves.” 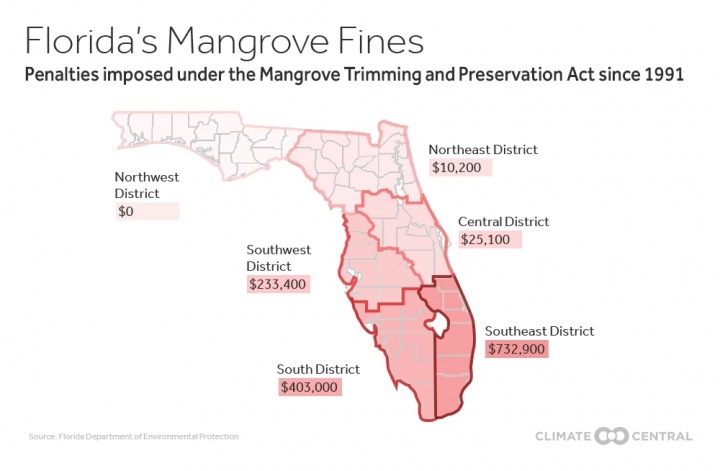 Using satellite imagery, Feller and another set of researchers found that a reduction in freezing weather caused mangrove forests to expand by more than 1,720 acres along Northeast Florida’s coast — points north of Daytona Beach — between 1984 and 2011.

Nearly three years ago, demand for Lippi’s mangrove trimming services spiked. Now it makes up about 15 percent of his business — and the dynamic with these customers tends to be different. “They’re being forced to hire me,” the arborist said.

“I think they’re just irritated that mangroves are something they can’t just do whatever they want with,” Lippi said, perched against one side of the boardwalk, framed by a backdrop of waterfront homes cloaked by a rising sea of mangroves  “So, when they call me, most of them are pretty polite, [but] most of them are a little irritated.”

“There’s the climate deniers. The right wing generally don’t, you know, buy into it. But everybody — and it’s all fishermen out here, this is a really really red county — everyone knows and agrees that these things are bigger and taller than they’ve ever been,” Lippi said. “And they’re moving farther north.”

A fourth-generation fisherman, charter boat captain Zach Timmons has navigated the Old City’s waterways since he was a child. Timmons has watched mangroves advance into areas like downtown St. Augustine, even spotting some farther north.

“A lot of people just don’t know what they are,” Timmons said. “The fact that the mangroves are working their way out here is a big indication that something is changing.”

Shifts in mangroves’ growing ranges from the tropics toward the poles are affecting ecosystems and fisheries worldwide, replacing salt marshes from Australia to Louisiana and Florida. With this expansion, some marsh plants and the animals that rely on them get pushed out of their habitats. While Timmons said he hasn’t noticed their affecting local fishing yet, he’s prepared for changes ahead.

“People might have to change fishing tactics,” Timmons said. “But that’s just fishing. You’re always evolving to your surroundings. And so are the fish.”

“There will be some benefits,” said Texas A&M University Associate Professor Anna Armitage, who investigates the dynamics of these changing ecosystems. “It could actually be a little bit more resilient to storm effects or to sea level rise, but you’re probably going to lose fishery habitat, which will be a downside.”

With atmospheric levels of heat-trapping carbon breaking records yearly, governments and environmentalists have been ramping up efforts to conserve huge natural carbon deposits, such as those found in forests and wetlands. Scientists have discovered that a hectare of mangroves can bury up to four times more carbon than a hectare of rainforest.

Yet upwards of a third of the world’s mangrove forests have been wiped out worldwide, mostly by coastal development and invasive species. The United Nations Environment Program reported in 2014 that mangroves are being cleared up to five times faster than other forests.

As historical mangrove forests in Florida and elsewhere are protected and restored, UCLA Assistant Professor Kyle Cavanaugh has been studying the poleward expansion of their ranges worldwide. Using remote sensing and spatial data, he has led projects monitoring changes in mangrove abundance along the East Coast.

“One common question I get is, ‘Is this a good thing?’” Cavanaugh said. “What I tell people is that, ‘Yes, mangroves are very important, but this expansion is replacing salt marsh, which is an important ecosystem itself.’”

‘Protectors of the Coast’

Linda Mulay lives on the fifth floor of a Port Orange condominium complex overlooking the waterfront. From her balcony, she can see a cluster of entangled mangroves sprawled over a seawall that was constructed to shelter the building.

Research examining sites in Florida and New Zealand published last month concluded that if stands of mangrove are wide and dense enough, they can provide effective flood protection during storms. In central Florida, where Mulay lives, mangroves have been a fixture of the environment for as long as she can remember. 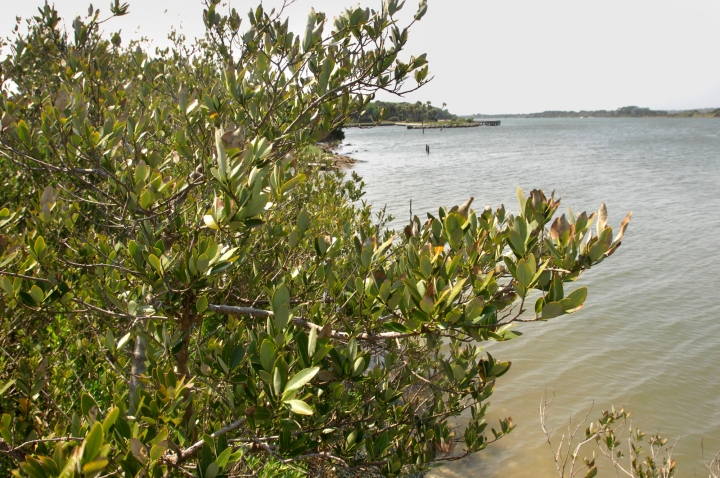 Mangroves in the Matanzas River north of St. Augustine.
Photo By Will Dickey/Florida Times-Union

“We had Irma that came through; luckily, we got no damage,” she said. “And then, of course, we had that one a couple years ago, Matthew — that took our roof right off our building, but we didn’t have any water damage. I think it was partially because they (mangroves) are protective and do help us out a lot.”

Like a small troop of soldiers taking up arms against a colossal battalion, the mangrove stand “likely prevented water damage” from both hurricanes by “reducing storm waves and preventing future coastal erosion,” said University of Waikato PhD candidate John Montgomery, lead author of the study published in the journal Geophysical Research Letters.

As pollution from fossil fuel burning and other industrial activities continue to bump up temperatures, storm surges are becoming more of a threat along Florida’s coastlines. Climate change intensifies storms and raises sea levels, both of which exacerbate flooding.

Research by Feller and others has shown these ecosystems can keep pace with rising sea levels by trapping and producing soil and other sediment and raising the height of the coastline.  Ongoing research at the Guana Tolomato Matanzas Research Reserve is investigating how mangroves taking root there might help the coastline adapt to future sea levels.

Michael Beck has been analyzing the economic role mangroves play in flood risk reduction. A research professor at the University of California Santa Cruz, Beck spent the past decade investigating how wetlands could be used to improve the ability of coastal communities to “bounce back” after floods and other disasters.

Beck is partnering with FEMA and the insurance industry to identify flood risk benefits and new ways to fund the conservation and preservation of mangroves. His past research concluded that mangroves reduce global flood damage by $82 billion a year — including $13 billion in the U.S.

“Right now, we’re rapidly increasing our risks of flooding, because of the local coastal development choices we make every day,” Beck said. “Our team has been looking at the risk reduction benefits of oyster reefs, mangroves, marshes, coral reefs, and mangroves are among the very best in terms of coastal defense.”

A senior marine scientist for the Nature Conservancy in Florida, Laura Geselbracht specializes in coastal restoration and conservation science. Based out of Coral Gables, the nonprofit manages more than 55,000 acres of land across the state and is running a Miami-Dade project where wetlands are being used to protect homes and communities.

“People clear mangroves so they can see the ocean better,” Geselbracht said. “As a result, we’ve lost a lot of that protection that things like mangroves have provided.”

Geselbracht points to the effects of coastal development in southern Florida from the 1960s through the ‘80s, when mangroves were “cleared or destroyed or trimmed to the point that they died.”

“Now, mangroves are very protected, compared to a lot of coastal systems.” Geselbracht said. “But the damage has mostly already been done.”

Climate change means the opposite trend is now playing out in North Florida. Matthew Hayes, a postdoctoral ecologist at Villanova University, said rising temperatures suggest there may not be another freeze strong enough to push mangroves back down the coast. “These impact freeze events were already quite rare,” Hayes said. “It is going to take a very extreme, and unlikely, event to send temperatures down that low nowadays.”

Hayes is working with Samantha Chapman, an associate professor of biology at Villanova University, on experiments at Guana Tolomato Matanzas Research Reserve simulating potential future temperatures to assess how mangroves will respond to the effects of climate change.

Emissions of heat-trapping pollution by the U.S. and the world increased last year, even as cities like St. Augustine searched for ways to adapt to climate change’s impacts, including the worsening of flooding, storms and heat waves.

Chapman thinks warming could push the uppermost range of mangroves into Georgia within a decade. Pointing to evidence that “hurricanes push mangroves northward,” she said recent storms mean individual mangroves may already be taking root even further north on Florida’s coastline.

“We are preparing for that and thinking about how to educate people living in areas where they haven’t been before,” Chapman said. “I think that we need to get used to our ecosystem shifting with climate change. And this often makes us sad, and it makes us uncomfortable.”

This article is reproduced with permission from Climate Central. It was first published on March 22, 2019. Find the original story here.

Editor’s Note: This is the second story in “Life on the Edge,” a series of journalism and research initiatives at Climate Central examining wetlands, sea-level rise and coastal change with support from the Doris Duke Charitable Foundation. (Read the first story here.)  This coverage was produced through partnerships with WJCT, the public media organization in Jacksonville, The Florida Times-Union, and PBS NewsHour.

Left: This decline in the number of frosts, coupled with intensifying storms spreading seed-like propagules, is causing mangroves to push poleward. Photo By PBS NewsHour Weekend