In quest to grow a better tomato, breeders forgot about taste

Picture a tomato slice on your favorite sandwich. It’s red. It’s ripe. And, odds are, it doesn’t taste that great.

But this blandness may not be the fruit’s fault, according to a study published Thursday in the journal Science. The research argues the robust, classic flavor of commercial tomatoes have been bred out of them over the past century. In a quest to produce heartier, larger tomatoes capable of staying fresh on the way to the grocery store shelves, breeders have inadvertently removed genes that give flavor.

Horticulturist and study co-author Harry Klee likens the taste evolution of a modern commercial tomato to a dwindling symphony performance.

“If you think of an orchestra and you remove one piece like a clarinet, you won’t notice a big difference,” said Klee who works at the University of Florida. “But if you do that once a year for fifty years and then all the sudden someone different walks in, they are going to say, ‘Wait, that doesn’t sound like Beethoven’s 5th.’”

The problem, Klee believes, is that breeders and growers have neither incentive nor tools to ensure the taste quality of their tomato varieties. Breeders focus on appearance, firmness, shelf life, disease resistance and yield, he said, while growers are paid for how many pounds they pick but don’t pay a penalty for lousy fruit. So, the flavor has deteriorated slowly due to neglect.

Just try drinking a glass of wine with and without holding your nose. The tastes will be completely different. 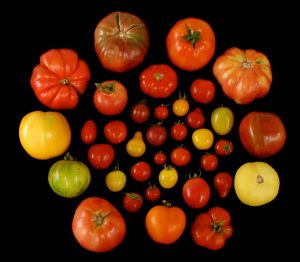 Numerous genes responsible for the flavor of tomatoes have been lost, as food producers
selected the fruit for other qualities, such as size and firmness. Photo by Harry Klee, University of Florida

So to find the genes responsible for tomato flavor, Klee’s team spent more than five years conducting taste tests with consumers. These panels tasted and rated 101 tomato varieties — heirloom, commercial and wild — on qualities like “overall liking” and “flavor intensity.” The researchers then ground up the tomatoes and analyzed their volatile compounds. Bland commercial varieties had significantly reduced levels of thirteen compounds associated with better flavor ratings.

Klee and company then partnered with researchers in China, who sequenced the genomes of 398 tomato varieties. The Chinese scientists then analyzed the correlation between the volatile compounds and specific gene sequences, using a process called “genome-wide association study,” or GWAS. Their results suggest genes linked to the 13 pro-flavor chemicals have been selectively bred out of modern, commercial tomatoes.

Klee believes these genes can be bred back into commercial tomatoes without losing the hearty characteristics breeders and growers value.

“We’re not going to be able to take the modern tomato and make it taste like heirloom, but I do think we can make it taste significantly better… And if we can make the the 99 cent tomato at the grocery store taste better, people may make better decisions in their diets.”

But David Francis, a tomato geneticist and breeder at Ohio State University, cautions that implying all heirloom tomatoes taste better than commercial ones is the “horticultural equivalent of alternative fact.”

“As someone who has grown heirlooms and modern tomato varieties, for both research and a family business, I can say without a doubt that there are heirlooms with insipid taste and excellent flavor in some modern varieties,” Francis said.

While Francis believes the science study does a good job of identifying the volatile compounds that could be used to improve flavor, he thought it did not adequately address the impact of a particular breed’s fruit size on flavor. Klee argues larger fruit carry more water, which dilutes their sugar content. But Francis thinks other genetic factors related to size could be at play.

And though genetics is a major factor both scientists also acknowledge that harvest and shipping methods may influence taste too. For instance, refrigeration can alter volatile compounds in the fruit and make them less tasty. Francis, meanwhile, believes picking a tomato before ripe does harm too.

“Florida tomatoes often have poor taste when they reach Ohio in the winter because they were picked green. If that same tomato were vine ripened, picked and eaten fresh it would taste just fine.”