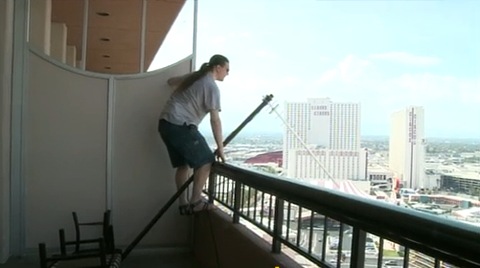 In a recent NewsHour report on cybersecurity, we showed security expert Chris Paget, shown above, climbing on a 29th floor hotel balcony in Las Vegas to demonstrate how he could read radio frequency identification tags at “long distances.” The RFID tags are embedded in various cards people carry such as access cards to a building or embedded in products at stores. Paget mounted powerful antennas on the balcony, and aimed them at the cards far below. He claimed that with enough power, he could read what was on the cards. And he warned that such cards, issued by the government and businesses, could help identify people and divulge other information about them. Watch the report:

But the editor of a magazine that reports on the RFID industry, Mark Roberti, objected to our story, saying that Paget’s presentation didn’t show RFID in a true light. He said 30 to 40 million people carry RFID tags on their windshields to allow them to cross bridges, and more carry them in their wallets, and there is not a single example of anyone who had their privacy infringed because of the tags. Roberti says police have not documented a link between identity theft and RFID. And, he continued, even if someone could read the tags, they wouldn’t get much information.

Roberti is concerned that the media, and some book authors, automatically assume that RFID tags will divulge personal data that thieves or the government would like to have. Some critics of the technology, he says, are convinced (with no evidence) that there is a conspiracy by big business and big government to spy on people, and that just isn’t true. It’s impractical to track people using RFID, he alleges, and long distance reading of the tags is not feasible. Taken as a whole, Roberti asserts, the benefits of RFID tags — to track merchandise and packages, and keep track of drugs and food — far outweigh any downside.

But Paget sticks by his guns. He says that since RFID usually works at only a few inches, the fact that he can read transponders from 200 feet is, in his estimation, “long distance.” He thinks with better technology, they can be read at several miles, eventually. He also says that radar principles are used, and that radar is designed to give direction and range, so that tracking of a person is completely possible — an allegation that Roberti disputes.

Paget says that information on an RFID tag can be useful; the numbers that can be deciphered give away the state where the tag was issued, what type of card (credit card, social security, phone, etc.) it is. He claims that it is a start to build a database on a person. And finally, Paget says he’s not anti-RFID, as Roberti claims. Rather, he is against abuses where RFID is used in identification documents. He says the trade group that the RFID Journal represents has taken issue with his work before.

Paget refers those who want more information to his own presentations on his website.

The NewsHour segment on cybersecurity did not — as Mark Roberti agrees — do a complete segment on RFID, but rather included it in a much longer story about hacking. We didn’t delve into the controversy over the tags. So bringing the subject up for more debate here seems valuable, and I hope this discussion of RFID moves the issue along.

And over the next few weeks, the NewsHour team will be reaching out for other perspectives on RFID technology. Let us know your questions and we’ll try to find the answers.

Updated 4:05p.m. ET
An alert NewsHour producer reminded us that the program did a segment on RFID technology back in 2006. You can see that here.