The real killer in the Ebola epidemic

Some disasters are more transparent than others. As we departed JFK airport on our way to Brussels and ultimately Freetown, Sierra Leone, we flew right over the Rockaways and Broad Channel, NY. Photojournalist Cameron Hickey was sitting right beside me. The two of us had spent a lot of time there in the wake of Hurricane Sandy, shooting a film for the PBS science series NOVA on how a city like New York can guard itself against rising sea level and worsening storms. 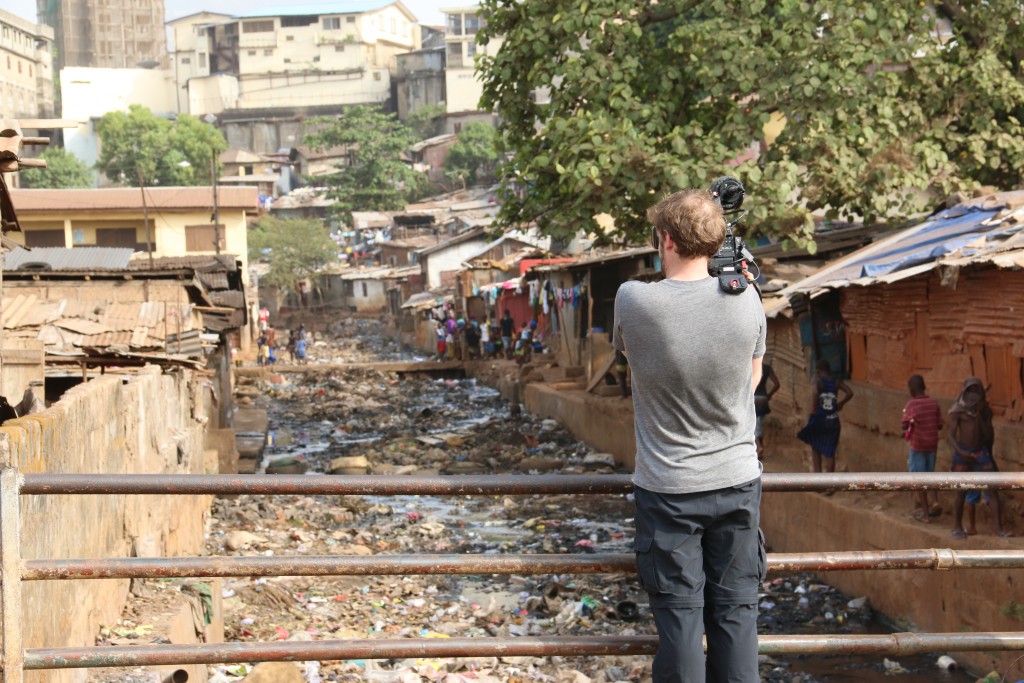 These days, hurricanes don’t sneak up on us, and the damage they create could not be more obvious. The Ebola epidemic is just the opposite. It began very quietly – probably beneath a bat-infested tree in Guinea in December 2013. It spread for months with little notice from the rest of the world. When exponential growth finally took it to a new level of awareness, it still took its toll in a more insidious way.

When I was driving the bustling streets of Kenema, Sierra Leone with Tulane University researcher Lina Moses, I asked her what it was like being in that very spot in the very worst days of the epidemic. She said it looked no different. “It’s not like a hurricane,” said this cyclone-savvy resident of New Orleans. An epidemic takes a human toll but leaves the buildings standing. I guess it’s sort of like a neutron bomb — designed to kill people but spare the structures.

That said, there are many clues to the horror here in West Africa. It starts the moment you get off the plane. A big cooler filled with chlorine-spiked water greeted us as we walked across the ramp from our Brussels Airlines Airbus A330. It was the first of dozens of hand washings that we would log in our ten day journey to Sierra Leone and Liberia. No one enters a building without thoroughly dousing his or her hands with chlorine and water. 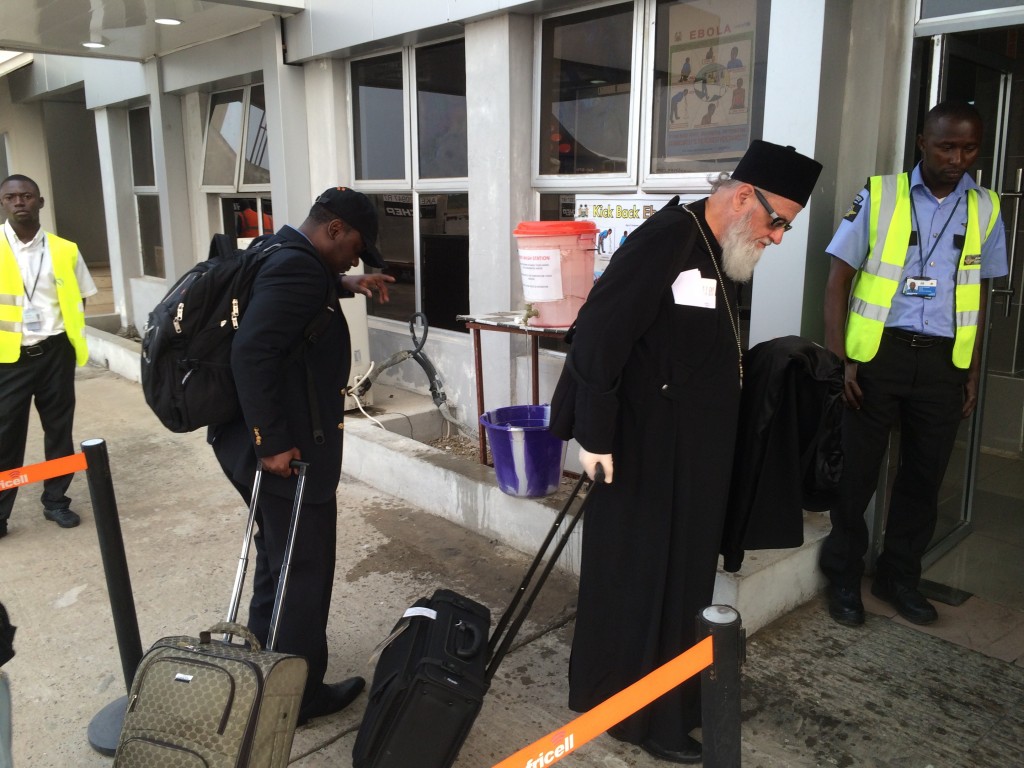 A handwashing station outside the airport in Sierra Leone. Photo by Miles O’Brien

Hand washing is like clapping; it takes two to tango, and as an arm amputee, neither are my strongest suit. As I approached the jug of chlorine at the airport, I was greeted by a fellow traveler, a Sierra Leonian returning home, who offered me his cleaned hand as an assist. We washed my hand together as he welcomed me to his country with a smile.

As we made our way in through immigration, there were more signs of what has transpired here — all kinds of warnings about what the disease looks like and how to avoid getting it. And then we encountered the first of dozens of infrared temperature takings. Every time I washed my hand, I got a reading. The temperature taker customarily tells you what your number is, so throughout the next 10 days, I knew exactly how hot I was.

Getting around Sierra Leone was easier in ways I didn’t expect — there’s actually a pretty good network of roads outside of Freetown that connect the major cities. But it was difficult in ways I didn’t expect either. There is no bridge across Tagrin Bay, which separates the airport from the capital city, so a drive from the airport to the center of Freetown takes more than three hours. The only practical way to get to town is to hop on a ferry. It’s about a 30-minute ride, which we would end up taking four times. We began our journey on the good ship Jonathan Good Luck. I was hoping it was an omen, as I knew we would need a lot of “Jonathan” on this trip. 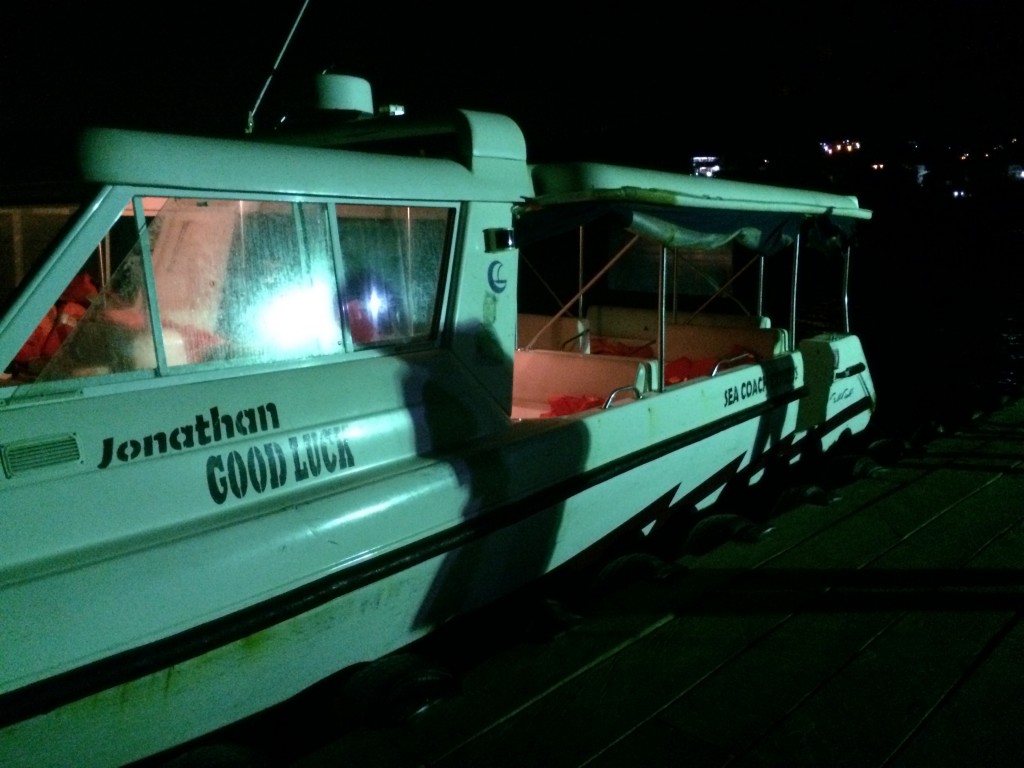 The NewsHour team took this boat from the airport to the capital city. Photo by Miles O’Brien

It turns out our good luck was named Umaru. Umaru Fofana, Esquire to be precise. Our Fixer. We didn’t know it at the time, but we soon discovered he is the most famous journalist in Sierra Leone, and perhaps West Africa. He works as a stringer for BBC and Reuters, and he is an extraordinarily courageous journalist — with scars from a gunshot wound to prove it. He is a rock star. 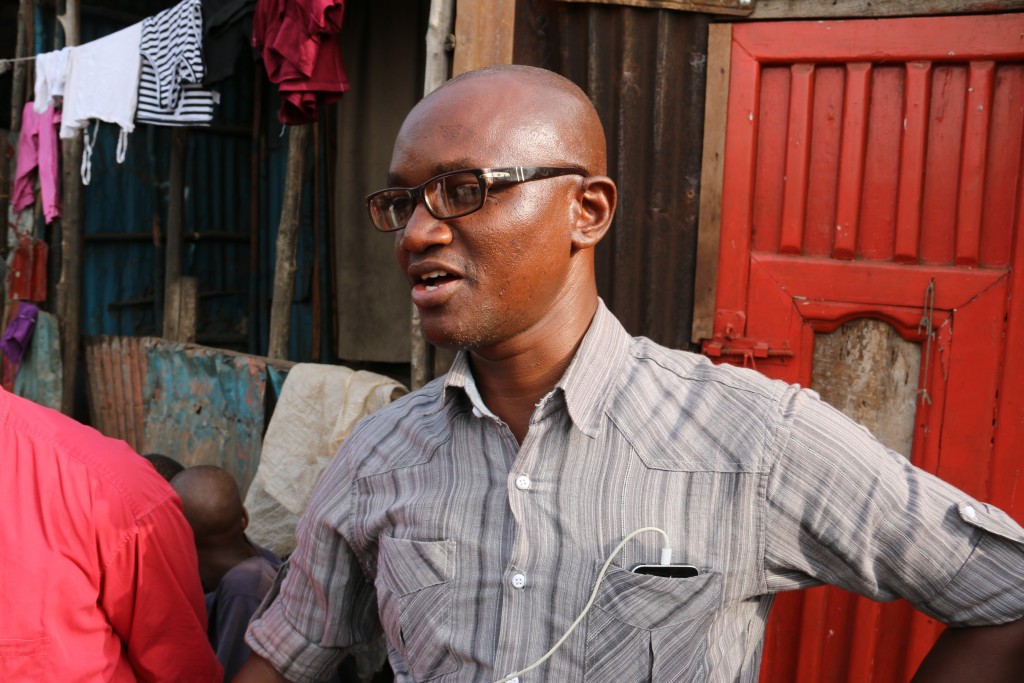 Umaru Fofana, Esquire, one of the most famous journalists in West Africa, was the team’s fixer for the trip. Photo by Caleb Hellerman

Wherever we went with Umaru, doors and gates opened, stern guards with AK-47s turned to gushy, smiling, fan-boys, and roadblocks became little more than speed bumps. He, along with his driver Mustapha, produced plenty of good luck for us. The honest-to-goodness truth is, on a reporting trip like this, your fixer will make or break you. Umaru made it possible for us to be great.

We said we were interested in shooting some footage of bats — the suspected reservoir species of the Ebola virus. Umaru took us to Victoria Park; a stone’s throw, or perhaps more importantly, a short drone flight, from the Presidential Palace. We were there to get some aerial footage of fruit bats in flight with our trusty unmanned aerial vehicle. The footage we shot in the air and on the ground is fantastic, but in the midst of it, Cameron forgot to keep his mouth shut as he looked toward the sky. I am certain guano does not taste like chicken, but you would have to ask Cameron for the real scoop on that. Given the nature of the story, this little episode seemed a little more serious than the grist for ribbing and humor that it would normally be.

A drone operated by cinematographer Cameron Hickey flies through Freetown, Sierra Leone, accompanied by a swarm of bats. Video by Caleb Hellerman

We flew the drone numerous times, and it never ceased to entertain an exponentially growing crowd. In the Kroo Bay slum of Freetown, the word spread like wildfire that a drone would soon be taking flight. Several times, I became worried that a spinning propeller might injure some of the hundreds of curious children who gathered all around us. Fortunately, when we told them to back away, they listened. [Of course, we had the Great Umaru there to assist!] But at the end of each flight, when Cameron would bring the drone down for a safe landing, he would have to grab the craft quickly and hold it above his head while he was mobbed like Charles Lindbergh at Le Bourget in 1927. 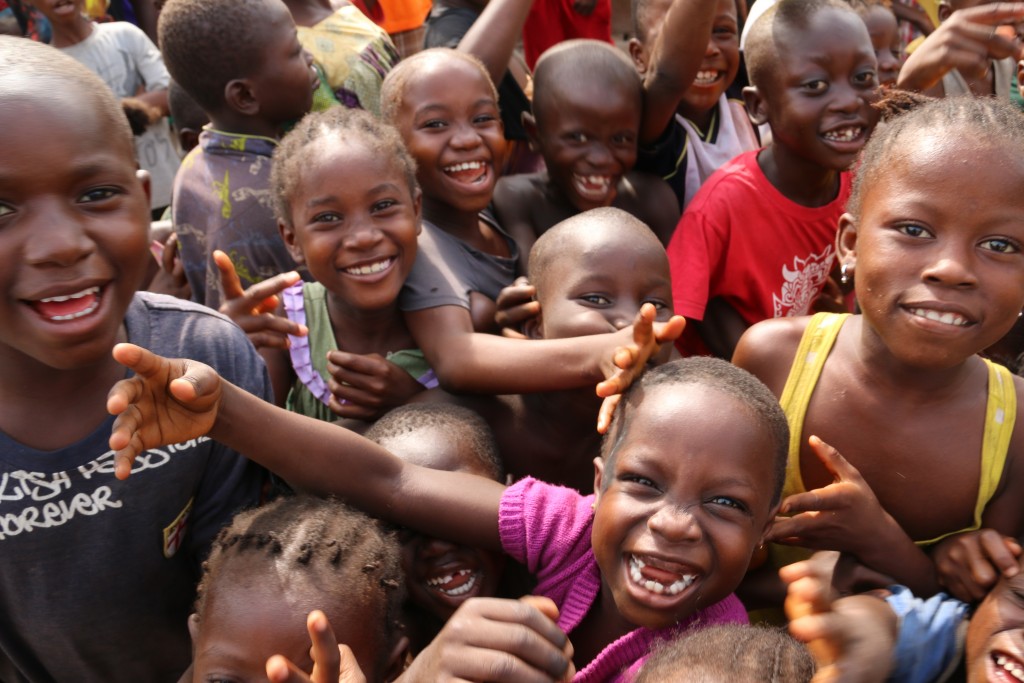 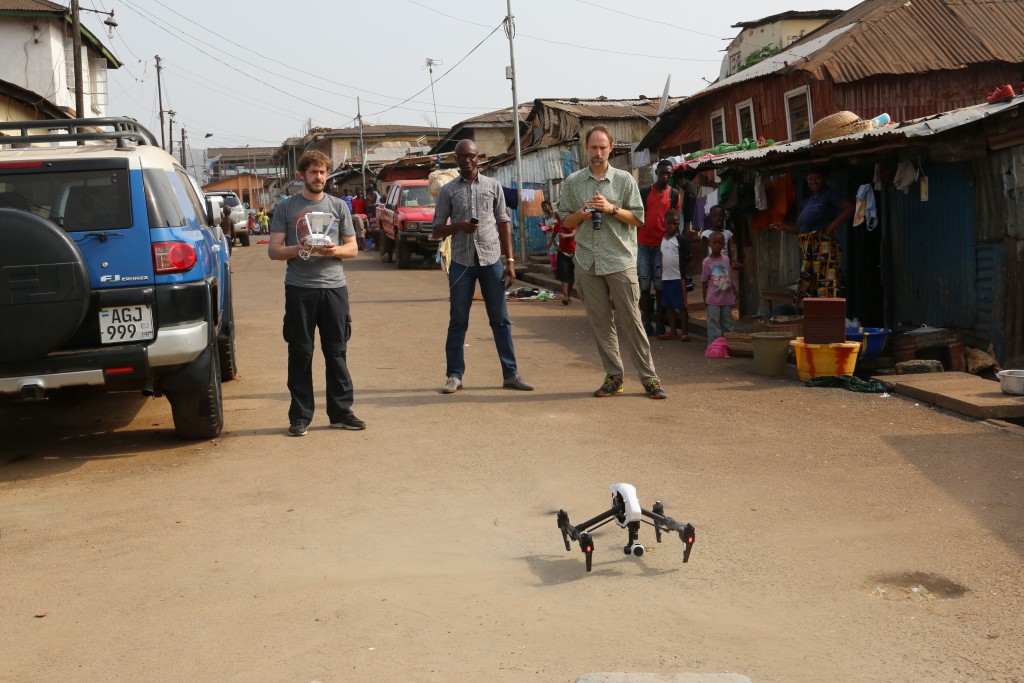 A crowd gathers as cinematographer Cameron Hickey flies a drone to capture video for the broadcast report. Image by Miles O’Brien

When we decided to fly the drone at a border checkpoint between Sierra Leone and Guinea, Umaru was able to convince the respective heads of immigration on either side of the line to allow the flight. They insisted on meeting me, and the picture I took of them is proof drones can bring people together so long as they’re used with peaceful intent! 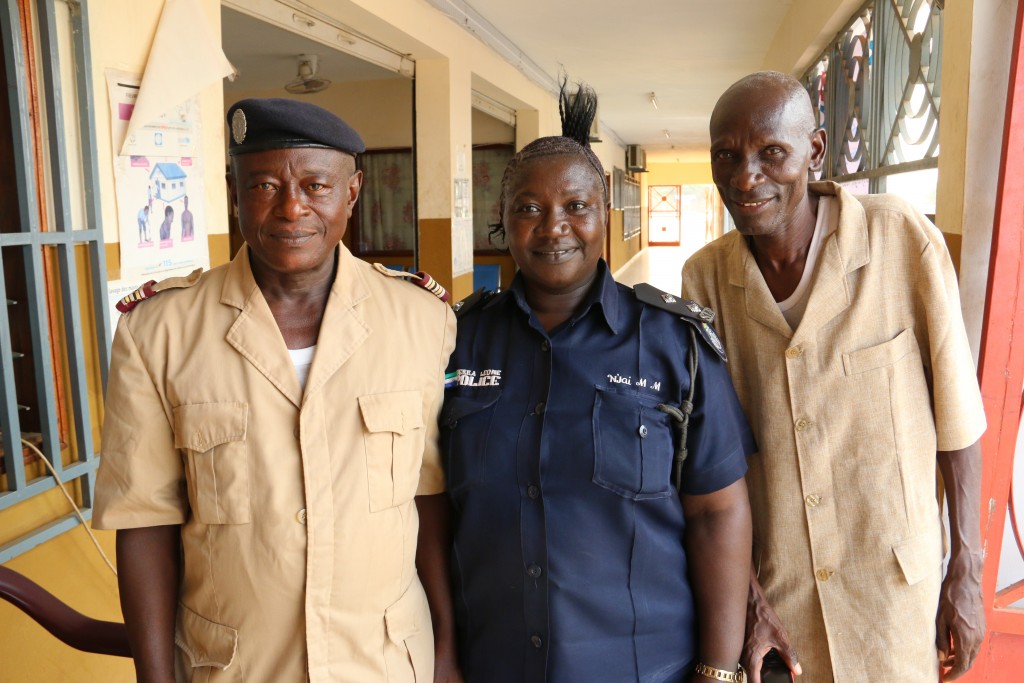 Miles captured this photo at the border of Guinea and Sierra Leone with the heads of immigration for both countries. Photo by Miles O’Brien

It is hard for we Americans to understand the depth of poverty in this part of the world. The real killers here are not the virus, but rather the lack of running water, electricity, good housing and opportunity. Ebola can be beaten back with money. We have proven it time and again here in the US. And yet, in the midst of the overwhelming poverty here, I found much happiness and hope.

When we were on our way to shoot the bat-filled tree in the center of town on our last Sunday in Sierra Leone, we happened upon a large group of young men running in cadence near the beach; chanting “Ebola 4 Go … Ebola 4 Go.” That’s essentially Creole for “Ebola be gone.” I could not help but smile. It filled my heart with joy, despite all I had seen and learned in the hard days before.

Miles O’Brien is veteran, independent journalist who focuses on science, technology and aerospace.