Reporter’s Notebook: Waiting in the dark for sea turtles to nest

The night sky above us was awash with shooting stars, so many that we stopped counting. I was stretched out on a remote Costa Rican beach next to my PBS NewsHour colleagues, head propped up on my backpack, listening as the waves crashed ashore and a tropical breeze blew in. Our cell phones were tucked away in pockets and bags because their white light was a no-no for the task before us. We were waiting for sea turtles to make their way onto the sand, where they’d hopefully dig their nests and lay their eggs for our cameras. Patience and a certain amount of luck were required, and only time would tell if we had both.

We’d flown to Liberia, Costa Rica, a day earlier for a story we were reporting on a new invention: a 3D-printed sea turtle egg, designed as a decoy to help curb a poaching problem that plagues Central American beaches. Nearly all species of sea turtles are classified as endangered; only one out of every thousand baby sea turtles survives to adulthood. The adults are slaughtered for their eggs, meat, skin and shells. And poachers destroy more than 90 percent of sea turtle nests across Central American beaches each year. The eggs are in demand as a local delicacy and are considered by some to be an aphrodisiac. The new decoys we were following held tiny GPS devices, which can help track the poachers and their smuggling routes.

But to encounter a sea turtle as she lay her nest, we had a few rules to follow, laid out by our guides for the night: wildlife biologists Helen Pheasey and Liza Gonzalez, who both work with Paso Pacifico, a California-based conservation group that has worked across Central America (and specifically Nicaragua) for the past 10 years. We had to wear dark clothing, step carefully along the beach and keep all our devices and lights turned off. Lights are such a problem that our guides confronted a group of Russian tourists who’d set up an illegal camp on the beach. The light from their campfire could be enough to deter female turtles from coming ashore and nesting, they said. (We were filming using a special infrared camera that’s safe for the turtles.) 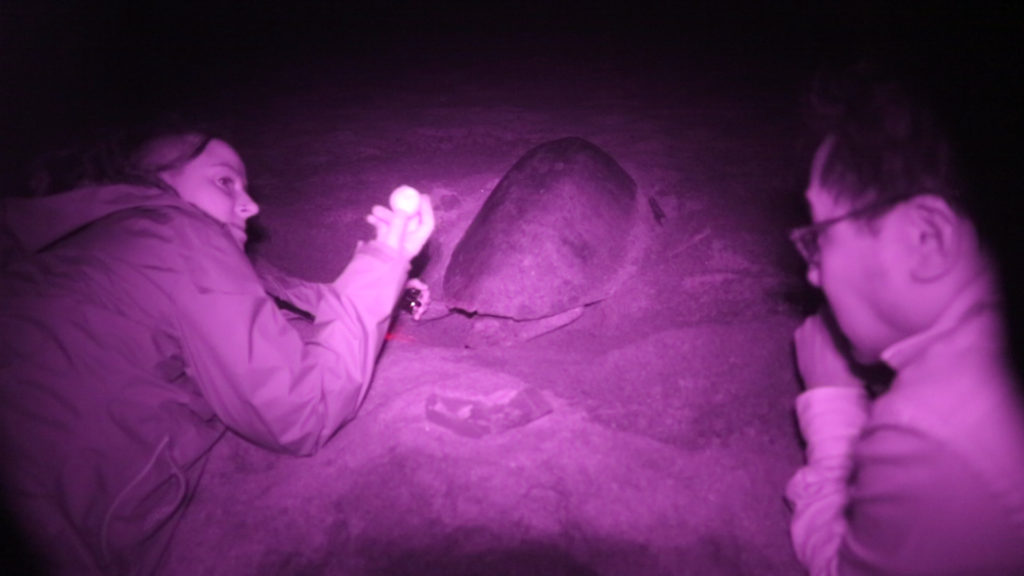 A researcher demonstrates a 3D-printed decoy egg to the PBS NewsHour team in Costa Rica.

Right away, the rangers who patrol the beach found a black turtle (a kind of green turtle found in the Eastern Pacific) nesting halfway down the beach. Under a nearly moonless sky, we set off, our eyes adjusting to the darkness as we tried to watch where we stepped. As we would soon learn, different species of sea turtle have different attitudes toward nesting. Black turtles are notoriously fussy and easily spooked. That was the case with this turtle. She hightailed it back into the water shortly after we arrived.

To find a sea turtle as she lay her nest, we had a few rules to follow.

With one false start under our belts, we found a space to wait, and wait, and wait some more. With no cell phones to distract us, our gazes turned skyward. Periodically, we’d make short walks up and down the beach watching for telltale signs of a turtle: the two long lines their flippers make in the sand as they drag themselves ashore. The clock was ticking and I wondered if another turtle would show up or if we’d go home empty-handed. After a 16-hour day, we all needed sleep. So just after midnight, we decided to pack it in and head back to our cars.

On the walk back, I was so busy marveling at the bioluminescent footprints I was making in the sand that I barely heard Pheasey’s order to stop. Just a stone’s throw from our car, an olive ridley turtle had started nesting. Thankfully for us, these are generally a laid back and unfussy species. This olive ridley didn’t seem to mind that we were there, and we had front-row seats to the nesting process (which you can see in the video below). We were there for nearly an hour, watching as the turtle lay nearly 50 eggs.

In the end, luck was on our side.