Revealed: the vainest skyscrapers in the world

With the recent competition between New York and Chicago over which city has the tallest skyscraper in the U.S. (winner: New York), we were reminded that many of the world’s loftiest towers benefit from some seemingly dubious enhancements. 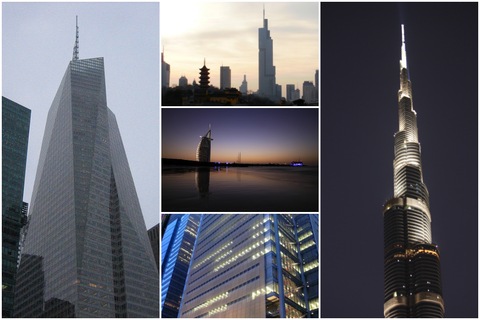 The Council on Tall Buildings and Urban Habitat put out a guide last month documenting the so-called ‘vanity height’ of many of today’s tallest skyscrapers. ‘Vanity height,’ according to the Council, refers to “the distance between a skyscraper’s highest occupiable floor and its architectural top.”

Here’s their chart of the ten tallest vanity heights:

The Burj Kalifa tower in Dubai has the greatest ‘vanity height,’ with about 820 feet of uninhabitable space perched on top.

What’s not shown on the chart: the ‘vainest’ building in the world. According to the Council, that honor falls to the Ukrina Hotel in Moscow, where 42% of that building is uninhabitable.

The Council notes that if you were to chop off the ‘vanity height’ of the world’s 72 “supertall” skyscrapers (those that are over 985 feet), 44 of those towers would lose their “supertall” status.