The shooting started toward the end of a non-violent protest over recent fatal police shootings. Police engaged in a standoff with the suspect, who was later identified as Micah Xavier Johnson, after he barricaded himself inside a parking garage. Following lengthy negotiations with the police, Johnson told officers he had planted bombs in the area.

Unable to subdue the suspect without compromising their safety, police decided to end the standoff by attaching explosives to a bomb robot and detonating them near the suspect.

Peter Singer, a strategist at the New America Foundation who has written several books on technology and war, said the decision was unprecedented.

“This is a first in terms of use of a robot lethally by the police,” Singer told NewsHour. He explained how the military had used robots armed with bombs at checkpoints, but the closest police had gotten to doing the same was in 2011, when law enforcement in Tennessee used a robot to shoot tear gas canisters at a suspect’s mobile home. The house subsequently caught fire, burning to the ground. The suspect escaped unharmed.

Pete Blair, the executive director of the Advanced Law Enforcement Rapid Response Training Center at Texas State University, agreed about the unprecedented nature of the events in Dallas. He said police departments have typically used robots to detonate bombs, but not to deploy lethal explosives.

The Dallas standoff could change these ground rules, which unofficially apply to the hundreds of police units with bomb robots in the U.S. 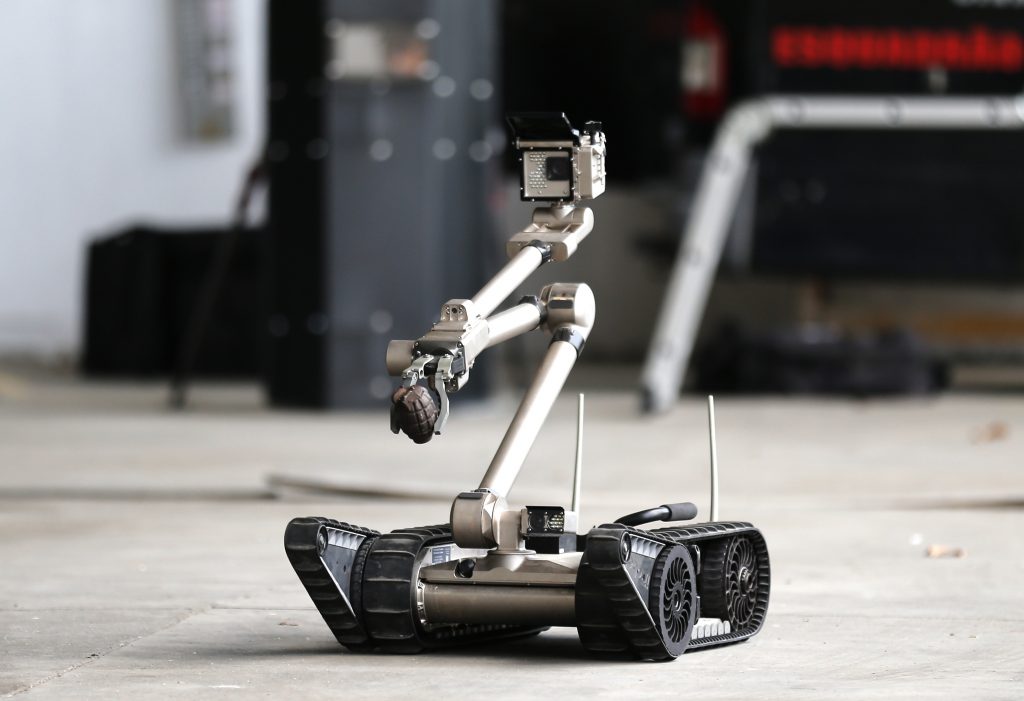 “Once an example’s been set, you tend to see other people follow that example,” Blair said.

The decision prompts questions of who is responsible for a suspect’s death if a robot pulls the trigger or trips a detonator, but Blair said existing rules of engagement still apply.

“There’s always a chain of command,” Blair said. “If you had a sniper on the SWAT team, the sniper gets authorization. The officer is responsible for the shot; the commander for the command.”

Blair also stressed that while robot-delivery of bombs is a new frontier in policing, “a robot is not an autonomous unit.” The robot is still being controlled by an operator, which allows police to be in control without exposing more officers to gunfire.

“We saw no other option but to use our bomb robot and place a device on its extension for it to detonate where the suspect was,” Brown said. “Other options would have exposed our officers to grave danger.”