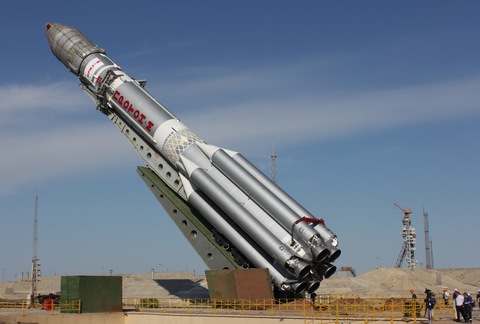 A Proton-M rocket, carrying a Nimiq 6 communication satellite is raised to the launch pad at the Russian-leased Kazakhstan’s Baikonur cosmodrome, on May 14, 2012. Photo by STR/AFP/GettyImages.

After a Russian Proton-M rocket lost control, tipped over and crashed in a fiery ball over the Kazakh desert on Tuesday, plumes of black and orange smoke could be seen hovering ominously over the crash site.

Watch the video of the July 2 Proton-M rocket crash here.

“Well, something seems out of sorts,” a Rossiya-24 news announcer is heard saying in Russian in the video above, as the rocket wobbled and pitched horizontal. And then: “Something is wrong. It appears this will be a catastrophe.”

The plume was partly due to rocket fuel that escaped during the craft’s plunge back to Earth. And this was not just any fuel, but a highly corrosive, highly toxic propellant combination, comprised of the chemical compounds hydrazine and nitrogen tetroxide, in addition to kerosene.

The Proton-M rocket system is born from the heavy-lifting Soviet Proton rocket, first launched in 1965. Proton was originally designed to be the world’s largest intercontinental ballistic missile, and intended to deliver a 100-megaton nuclear warhead to the United States. But its mission shifted to space launch after the Cold War cooled.

Because Tuesday’s rocket failure occurred only 17 seconds after liftoff, the fuel had little time to burn off, and the orange cloud seen hovering over the crash site was the distinctive color of nitrogen tetroxide, according to Jonathan McDowell, an astrophysicist and space historian at the Harvard-Smithsonian Center for Astrophysics.

There were no reports of casualties or any immediate threat to area homes, though residents in the nearby town of Baikonur were instructed to stay indoors and refrain from using air conditioners, according to a New York Times report.

But its proximity to the ground made it one of the more dangerous Proton rocket explosions, McDowell said: “It’s really when you have these failures in the first few seconds of flight, where you’ve got a fully loaded rocket — those are the scary ones.”

Hydrazine, which has an ammonia-like odor, is dangerously unstable unless handled in a solution, according to Leon McKinney, an air, space and defense consultant.

“It’s just bad news to handle,” he said. “You have to have special handling procedures. A special Hazmat team.”

But its partner and oxidizer, nitrogen tetroxide, is even more dangerous, McDowell said.

Inhaling nitrogen tetroxide “is like acid inside the lungs,” he said. It’s a carcinogen, and exposure can cause burns to the lungs, throat and skin. Dead cows and horses have been found in the flight path of successful launches that use the propellants, believed to have grazed on grass contaminated by fallen space debris.

In 1975, three Apollo Soyuz astronauts were hospitalized for five days and treated for lung irritation after nitrogen tetroxide leaked from the steering jets into the cabin during reentry. Release of nitrogen tetroxide at a chemical plant in Louisiana in 1995 resulted in the evacuation of 3,000 people and 81 hospital admissions, but no deaths.

But the propellant combination is appealing for its “hypergolic” qualities, meaning it spontaneously ignites when the fuel and oxidizer come in contact. It also can be stored at regular temperatures.

Launching any rocket requires both fuel and an oxidizer that allows it to ignite. Combustion then occurs inside the rocket’s engine thrust chamber, exerting tremendous outward pressure on all sides and forcing hot gas at high speed from the only opening, the nozzle at the back end. It’s the momentum of the combustion waste product that thrusts the rocket upwards.

“It’s a bit like you’re balancing a pencil on top of your finger,” McDowell said. “Imagine a rocket going up on its pillar of flame. It wants to fall over. Its tendency is to fall over. And rocket designers have to go to great lengths to make sure that doesn’t happen.”

McKinney compared the mechanics of a rocket launch to a balloon.

“If you take a balloon, and you untie the end, the air rushes out, and the balloon zooms away,” he said. “The principle’s the same.”

NASA also uses hydrazine and nitrogen tetroxide, though more sparingly than Russia, said Bryan Palaszewski, leader of advanced fuels at NASA’s Glenn Research Center. It was used for maneuvering and de-orbiting the space shuttle. It also powers small rocket engines on many navigation and communication satellites. And it helps keep the International Space Station in orbit. Launched in 1977, the Voyager 1 spacecraft’s hydrazine-fueled engines are still furiously at work today as the spacecraft hurls through deep space.

But the agency has been moving toward “green fuels” that are safer, more environmentally friendly and require fewer procedures and less infrastructure to handle.

The Dream Chaser spacecraft, which will soon begin flight testing, would rely on a cleaner combination of nitrous oxide and ethanol, for example. Engineers are also collaborating with NASA to build a green propellant for satellites as an alternative to hydrazine, said Roger Myers, executive director of electric propulsion and integrated systems at Aerojet, which is contracting with NASA.

“It’s essentially a fertilizer with fuel,” he said. “You can handle it in a shirt sleeve environment. And if you spill it, you wipe it away with a cloth, and it’s not a big deal.’

McKinney points out that no rocket is safe. Solid booster rocket fuel, for example, uses perchlorate oxidizers, which, during a launch, create great quantities of hydrochloric acid, which has been known to contaminate water and soil.

“I think the thing to note is that we’ve been flying rockets since World War II, and they’re all bombs, they’re all flying bombs,” McKinney said. “If you look at the power generated by the space shuttle main engine — it has one of the highest power densities of anything short of a nuclear bomb. It’s tremendous power in a small space. That’s why so much effort is put into making sure they fly safely.”

Correction: An early version of this story incorrectly identified a type of propellant that NASA uses for powering small rocket engines on navigation and communication satellites. It is hydrazine and nitrogen tetroxide.