Running elk ragged just to get their antlers

A growing number people head out to wild places in search of the antlers that elk and deer shed. Some of those collectors harass these animals to death by chasing them down with ATVs. Video by EarthFixMedia

The trick to finding fallen antlers is to never look up.

“You’re trying to just find something that looks out of the ordinary,” said Rob Tanner while he makes his way through bitterbrush and around blooming sagebrush and juniper trees with his brother-in-law, Troy Capps.

Every year deer and elk shed their antlers, and every year these two men make it their mission to find them. The sport is called shed hunting.
“There’s just something about it. It’s just an adrenaline rush. It’s like, ‘Oh, this could be the one. This could be a really, really nice one.’ I’ve never quite been able to explain that feeling,” Tanner said.

For nearly a decade, antlers have been popular in decor and fashion. At the same time, a growing number of people are heading out to wild places, hunting for those shed antlers to collect, make into decorations, or sell for big money.

Washington and Oregon have imposed rules to make sure that “shed hunters” don’t harm elk and deer. But not everyone follows those rules. Instead, some shed hunters cruelly endanger the health of deer and elk so they can be the first to snatch up those prized antlers. 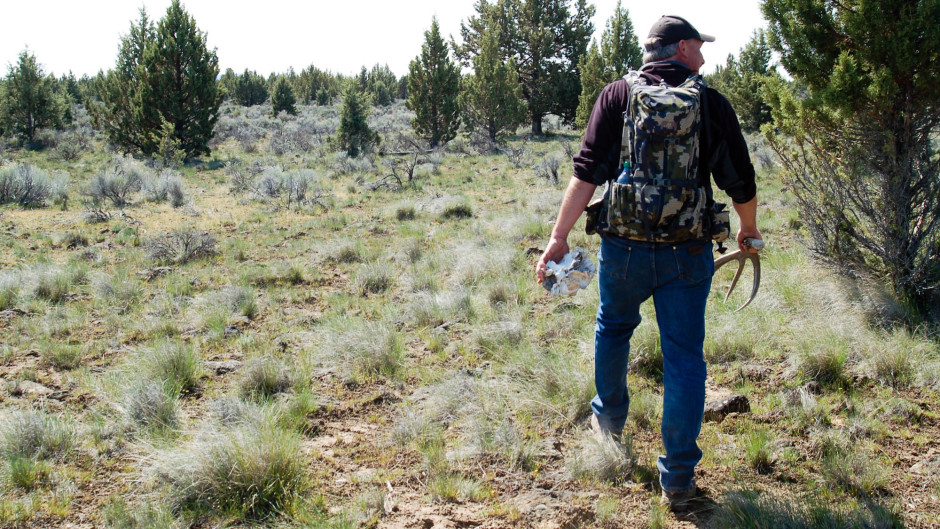 “They may not drop dead on site, but some of them do. Once they get off, they never recover from that kind of stress, and they’ll actually die in and around the feed area.” — Washington Wildlife Enforcement Capt. Richard Mann
Late winter and early spring is when male elk and deer naturally shed their antlers and grow a new pair. That’s also when the animals are at their most vulnerable. They’ve survived the fall hunting season and struggled through the lean winter months. They’re hungry and sometimes sick. Snow in the mountains usually concentrates herds at lower elevation, where they can find vegetation to graze on.

Wildlife managers have established winter ranges for elk and deer, restricting human access until late March or early April and prohibiting the use of motor vehicles. But unscrupulous shed hunters have been known to sneak into these wildlife reserves when entry is restricted so they can collect antlers or force the animals to shed them prematurely by chasing them on foot or ATVs.

“People are running these elk while they’re really in poor condition physically,” said Washington Wildlife Enforcement Capt. Richard Mann. “They may not drop dead on site, but some of them do. Once they get off, they never recover from that kind of stress, and they’ll actually die in and around the feed area.”

‘I hate seeing that’

Tanner and Capps have been looking for antlers for more than 20 years. On this hunt, they’re traipsing around one of their favorite spots in Central Oregon.

All signs indicate it’s going to be a good day to add to the piles of antlers they have stored in their garages.

“We’re in the prime right here,” Capps said, noticing signs deer have been roaming this area for some time — deer tracks, bare bark on trees where male deer rub their newly-grown, velvety antlers.

Then Capps spots something on the ground. Signs of people, not deer.

“That’s a four-wheeler. I mean, they’re probably out here running around, and that’s, that’s wrong,” Capps said. He bends down to inspect the tire treads. 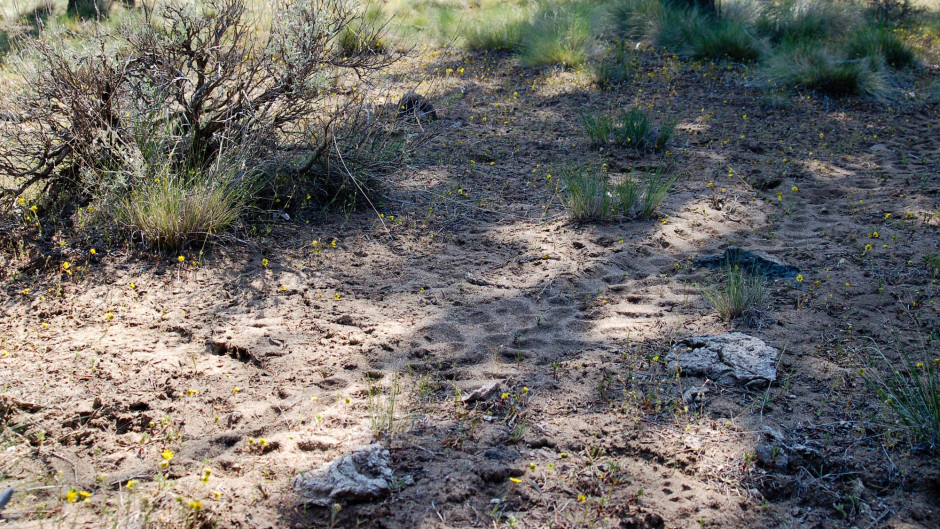 ATV tracks zig-zag through an area that’s closed to motorized vehicles in the winter. Photo by Courtney Flatt/NWPR/EarthFix

Despite the area’s closure to motorized vehicles, Capps thinks the zig-zagging four-wheeler is probably why they haven’t found any antlers in this area so far.

“As soon as I saw those, my first thought was, ‘Ah….’ You walk all the way in here and a four-wheeler came in that far,” he said. “I hate seeing that.”

A growing number people head out to wild places in search of the antlers that elk and deer shed. Some of those collectors harass these animals to death by chasing them down with ATVs. Video by EarthFixMedia

A portion of the wildlife area’s 64,000 acres is closed off during the winter so the Washington Department of Fish and Wildlife can feed elk herds and keep them out of orchards and farms in the Yakima Valley below.

Where does antler art come from?

In most cases, those antler chandeliers you see decorating hunting lodge-themed whiskey lounges or used to make knife handles or dog chews were the bounty of the natural cycle of antler growth. Deer and elk shed their antlers at the end of winter or beginning of spring. The process is similar to the loss of baby teeth as a child’s adult teeth grow in.

Scott McCorquodale, a Washington Department of Fish and Wildlife biologist, said the new set of antlers is already growing once the old pair falls off.

“Antlers develop rapidly while growing; a large bull elk will produce antlers with a main beam of 50-60 inches or so in about 150 days of growing,” McCorquodale said.

Antlers can go for up to $35 per pound. A complete set from a trophy bull can bring in thousands.

And for those willing to use illicit tactics to gather and sell antlers, penalties for those few who get caught are regarded as just the cost of doing business, Mann said. Fines rarely exceed $1,000. They’re usually lower than that. 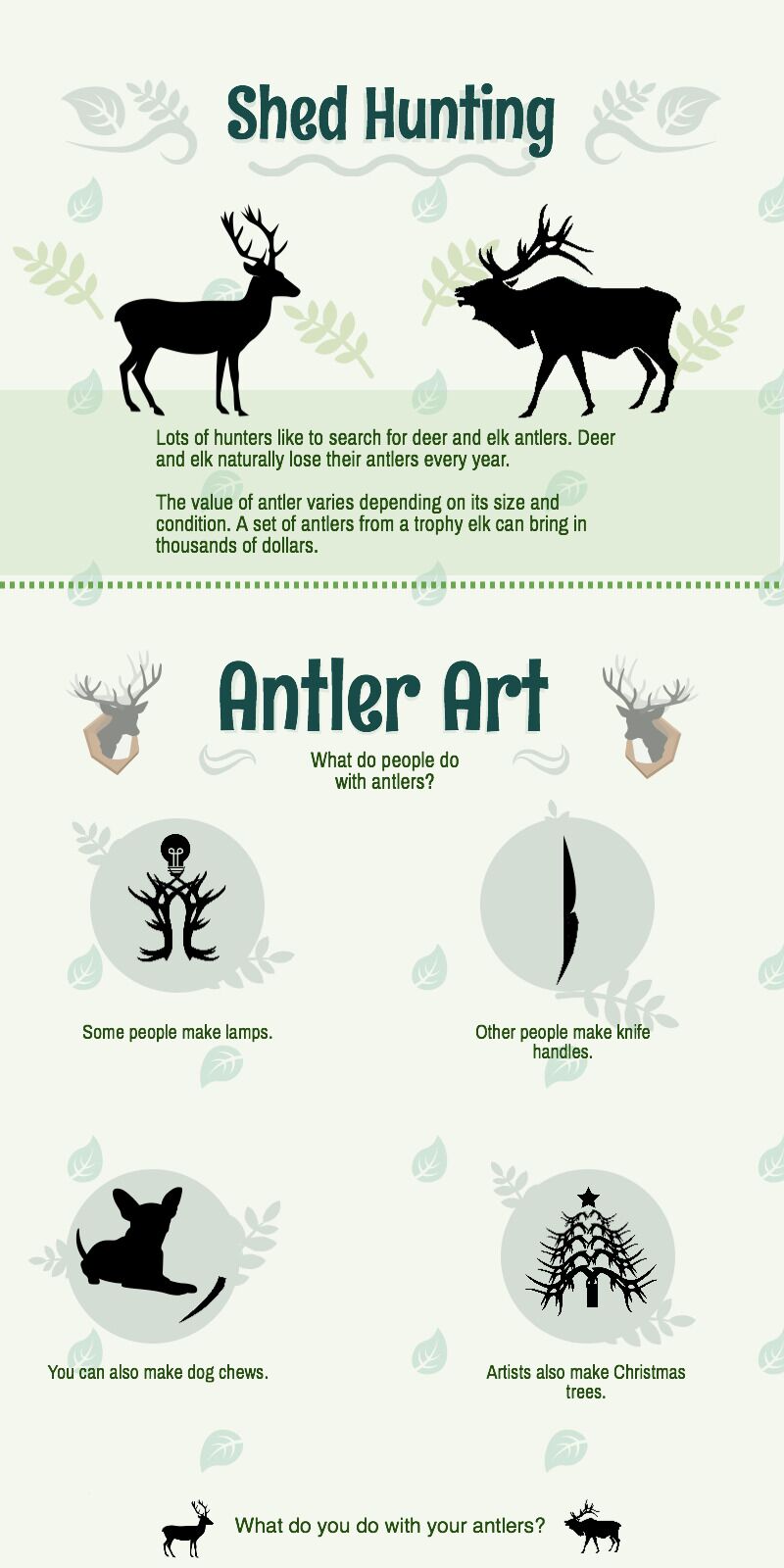 The issue has gained traction in the Washington Legislature. This year, a bill was signed into law that expanded enforcement officers’ ability to ticket people who enter private land to collect wildlife parts.

Rep. Joe Schmick, R-Colfax, introduced the bill after a constituent complained of illegal shed hunters chasing elk with dogs onto his private property.

“The people that they were citing, they simply said they’re happy to pay the trespassing fine and the fees if they keep the sheds,” Schmick said at a committee hearing. “This bill is trying to address that problem. Now the Fish and Wildlife will be able to confiscate the sheds, the antlers, when they’re found with them on private property. On state property it’s already legal to do that.”

Looking out for elk

To help catch illegal shed hunters in the act, the volunteer group Eyes in the Woods sets up cameras to try to catch people trespassing in the Oak Creek Wildlife Area while it’s closed. 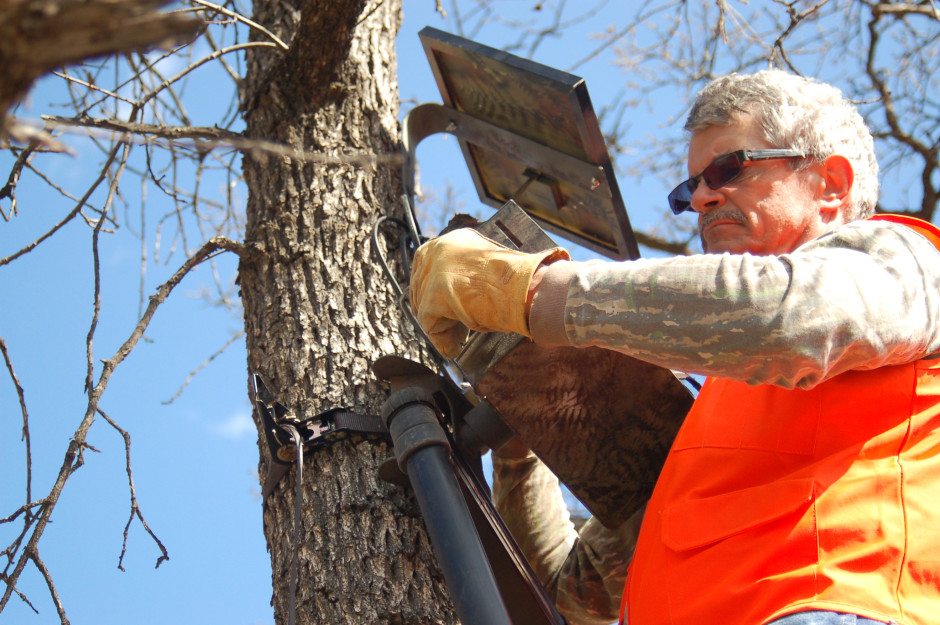 Eyes in the Woods volunteer John McGowan sets up a camera at Oak Creek Wildlife Area. Photo by Courtney Flatt/NWPR/EarthFix

Kyle Winton, who co-founded Eyes in the Woods 16 years ago, has picked out spots to hang cameras around Oak Creek.

“The very first year, the very first time we put our camera up, within about half an hour after we left we got a picture of our very first violator with three antlers on his back,” Winton said. “It was amazing how many people were violating the closure, and the animals were paying the toll.”

Now, Winton said, only a handful of people still continue to violate the closure — most others are deterred by the cameras.

At Oak Creek, the group secure the cameras inside bear boxes, screw on antennae, and strap the boxes to trees.

Once the cameras are set and ready to go, they wait to see if they catch anyone trespassing. This year the cameras caught about four people.

Several months later after setting up their cameras, the group gathers at a cabin near Oak Creek. They’re prepping for a stakeout to watch for illegal shed hunters trespassing into the wildlife area. 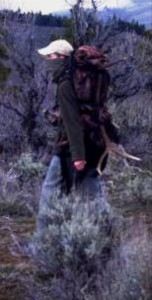 Winton said trespassers have been known to stockpile illegally-collected antlers all season. They sneak into Oak Creek the night before it re-opens — hoping to carry out their stashed antlers in the morning by blending in with the legal shed hunters who waited for the gates to open.

“It’s kind of suspicious when you see somebody coming out with 10 or 12 antlers at 9 o’clock in the morning. That happens quite a bit. But guarantee they didn’t find those in a couple of hours,” Winton said.

The group deployed to spots where they know people might sneak in. Under moonlit skies, Winton hiked up a bluff and perched behind a boulder. From there he could see most of the wildlife area.

After a long night, volunteers spotted two people trying to enter the other side of the wildlife area.

“Things are going smoothly over here. Got a few people that went in early at the junction,” the radio chirped.

Eyes on the prize

At 6 a.m., the gates finally open for lines of cars, horses and hikers. They’ve been there since the night before, waiting to begin their search. By afternoon, several are gathered in a bustling parking lot, excited to show off their prizes.

Seven-year-old Bobbi Cline found an antler pretty close to the gate. It’s almost as big as her.

“I’m holding an elk ear that we found. We found it in the bushes,” Bobbi said.

The Cline family is collecting antlers to make a chandelier one day. How soon they’re able to complete that project might depend on the success of wildlife officers volunteer groups and ordinary citizens when it comes to stamping out illegal shed hunting.