The quest for finding life outside our planet just hit the accelerator, thanks to a new $100 million project called the Breakthrough Initiatives. The mission: search the cosmos for an intelligible message from aliens.

“We are life. We are intelligent. We must know.” — Stephen Hawking on the search for life beyond Earth

Spearheading the project is Yuri Milner, the Russian billionaire and entrepreneur who amassed his fortune by betting early on Facebook. Milner announced that the money, for now, will be split between two efforts: searching for alien life outside our planet and creating digital messages to transmit beyond Earth.

“It’s time to commit to finding the answer to search for life beyond Earth,” said theoretical physicist Stephen Hawking — just one member of the star-studded panel at the project’s launch ceremony, hosted today at the The Royal Society in London. “We are life. We are intelligent. We must know.”

“Breakthrough Listen” will be the biggest scientific enterprise ever to seek signs of intelligent life outside our planet. The funds will go toward gaining access to two of the world’s strongest telescopes. First is the 300-foot-wide Green Bank Telescope in West Virginia, the U.S.’s largest radio satellite. The other is the biggest radio receiver in the Southern Hemisphere: the 206-foot-wide Parkes Telescope in New South Wales, Australia.

“Over the last half century, astronomers have significantly refined their search technology. They had brilliant leaders but often operated on a shoestring budget from government funds and silicon valley donors,” Milner said.

Milner described how the biggest radio telescope on the planet — the 1,000-foot wide Arecibo Observatory in Puerto Rico — could conceivably catch a message from an identical transmitter placed near the center of our Milky Way Galaxy some 150 million billion miles away. If Arecibo was harnessing enough power — twice as much, Milner said, as is generated by the Three Gorges Dam in China — then scientists could detect a message from our nearest neighbor, the Andromeda Galaxy, which is 2.5 million light-years away.

“We will target the nearest 1 million stars and the nearest 100 galaxies. We’ll target the entire plane of our Milky Way galaxy, including the center with its billions of stars,” said astronomer Geoff Marcy of the University of California, Berkeley, who is one of the project’s leaders. “I would bet my house that among the nearest 100 star systems, single-cell organisms can be found and are flourishing … or at least I’d bet Yuri’s house.” 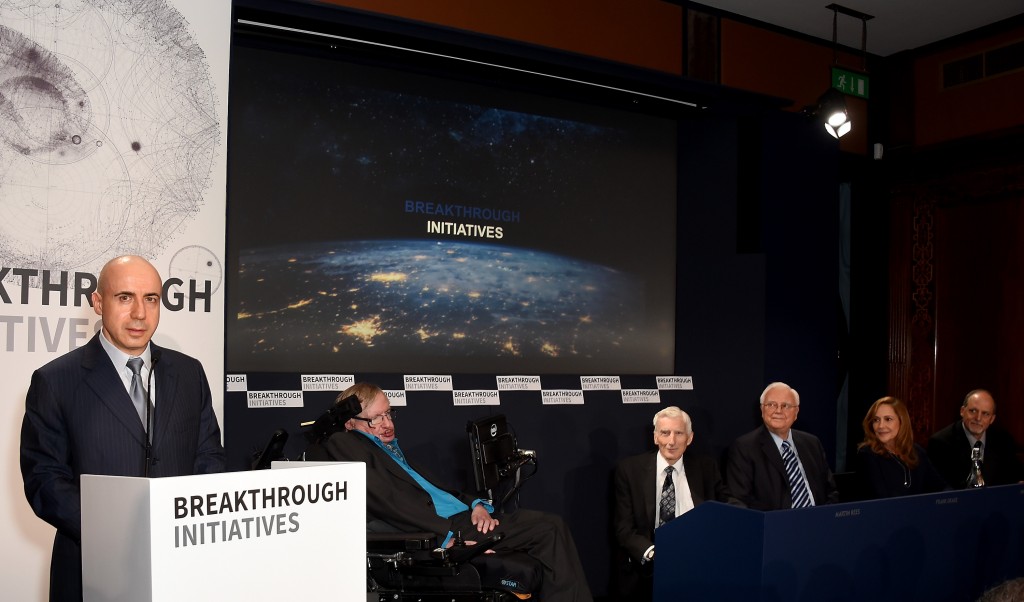 The team will hunt for radio waves and optical laser transmissions; the latter will be captured by Marcy’s team at the Automated Planet Finder Telescope at the Lick Observatory in California. Overall, they’ll examine 10 billion frequencies of light waves and radio waves — that’s unprecedented coverage.

“There are so many stars, so many frequency channels that we must make a very comprehensive search with very sophisticated equipment that allows us to search the whole radio spectrum in a very short time with high sensitivity for signals,” said project leader and astronomer Frank Drake, who led the first modern search for extraterrestrial intelligence (SETI) in 1960.

The second initiative, “Breakthrough Message,” is an international competition to create digital messages for our putative alien partners. The pool of prize will total $1 million.

One project leader on Breakthrough Message is writer and producer Ann Druyan, who helped make the PBS documentary “The Cosmos” and, along with astronomer Carl Sagan, created the interstellar message for the NASA Voyager mission.

Druyan said that the goal isn’t necessarily to beam messages into space, but to decide as a global community how the human race should be represented.

“What we hope to do in this new initiative is think together and come to a conclusion over whether it’s wise to send such a message and what specifically we want to convey about who we are,” Druyan said. “Do we put our best foot forward or show ourselves as we really are?”

Breakthrough Initiatives will span at least 10 years. The project will be open access, so astronomy enthusiasts can skim what might be the largest collection of scientific data ever collected. Regular folks can pitch in by signing up for SETI@home, which uses the Internet to link the processing power from at-home computers into a large supercomputer.

Recent findings by NASA’s Kepler space telescope have revealed at least 10 percent of the stars in our Milky Way Galaxy harbor planets of nearly Earth size at lukewarm temperatures.

“Technology allows much more sensitive searches than could be done before, and the latest instrumentation on the biggest telescopes will be able to hugely extend what’s been done,” said University of Cambridge cosmologist and astrophysicist Lord Martin Rees. “The chance of finding life has risen a billionfold when we realize that habitable planets aren’t rare, but there are literally billions of them in our galaxy.”

Left: A new ambitious search might be able to detect signs of extraterrestrial life as far away as Andromeda Galaxy, which is 2.5 million lights years from our Milky Way. Photo by GALEX, JPL-Caltech, NASA