To save lives, supercomputers dive into the hearts of nature’s worst tornadoes

Leigh Orf chases tornadoes across America’s central plains, but not from inside a pickup truck. His preferred vehicle is a computer.

Orf, a University of Wisconsin-Madison meteorologist, creates computer simulations of supercell thunderstorms — and the twisters they spawn — from the safety of his lab. Even when they don’t yield twisters, supercells are some of the most powerful and deadly forms of severe weather, and like many in his field, Orf wants to understand their inner mechanics.

Think of half a million computers essentially working together in one big computer.

He and his team use Blue Waters — one of the most powerful supercomputers in the world — to run many of their models. This spring, the group released the most detailed simulations ever of an EF-5 tornado, the same brand of high-powered storm that struck El Reno, Oklahoma, with deadly force in 2011.

Together, their simulations reveal two tornado development features: a horizontal tube of air known as a “streamwise vorticity current” that helps initiate and maintain twisters and a parade of vortexes — called “misocyclones”– that both anchor and spin a tornado after it forms.

The NewsHour asked Orf how his simulations could one day improve tornado forecasting.

Questions and answers have been edited for brevity.

Why do you use computer simulations to study supercell thunderstorms? 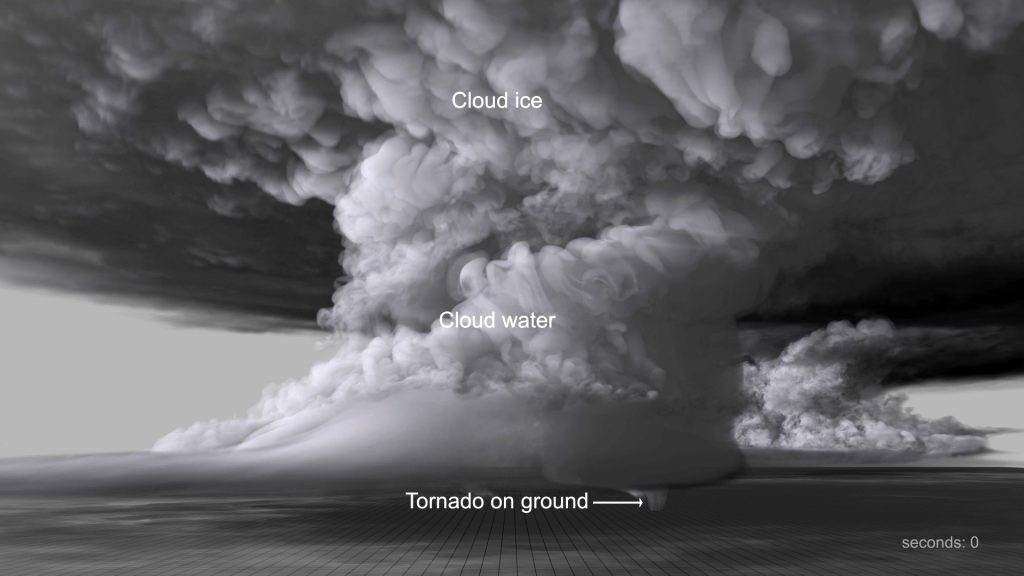 The reason we are studying them is because when you think of 2011 with Joplin, Missouri, Tuscaloosa, Alabama [and] El Reno, Oklahoma, these were the big, long-track EF-5 tornadoes that just do incredible amounts of damage and, if people can’t get out of the way of those storms, a lot of fatalities. I use computers to simulate those types of tornadoes at very high resolution, and then I use techniques to visualize that data at very high fidelity.

When one of your computers predicts the conditions are ripe for a tornado, does that guarantee a storm will happen?

We are not guaranteed that these tornadoes will happen. It’s much like the real atmosphere where it’s challenging to predict whether a supercell will produce a tornado at all. We are letting the simulation evolve using the model and equations of physics, and many times we don’t get a tornado or we get a very weak tornado. These really strong tornadoes only occur in some of our simulations, and this is what is significant about this particular work. We’ve finally managed to get one of these storms to be simulated at high resolution.

How do your simulations work? What kinds of information goes into them?

A computer model like the one we’re using essentially emulates or simulates the real atmosphere as faithfully as we scientists know how to make it work. We use the equations of physics to essentially grow a cloud in a specific environment. We’re choosing an environment that is very well known to produce very strong supercell thunderstorms to see what happens when tornadoes start to form. 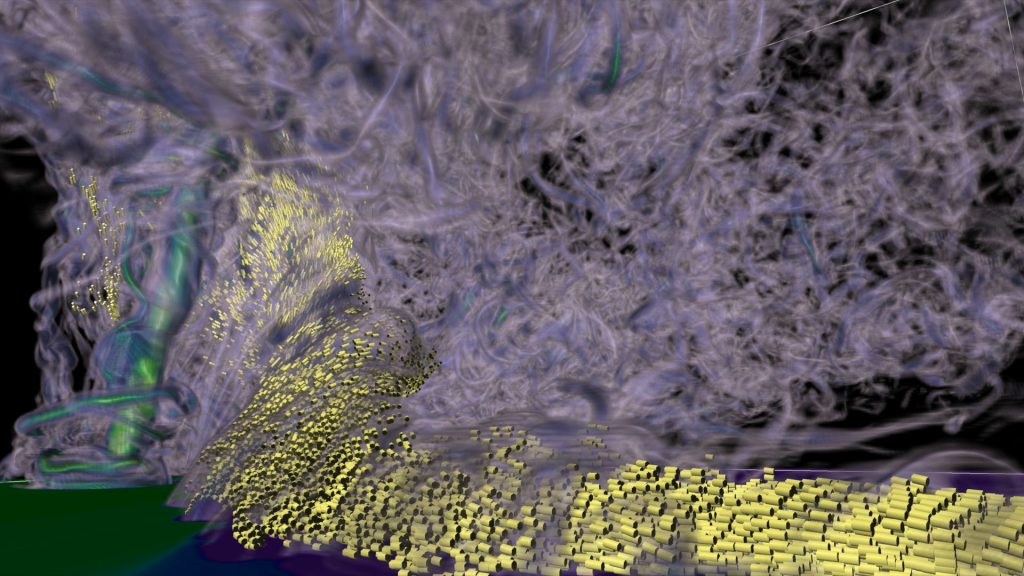 The streamwise vorticity current, depicted in yellow in this supercomputer simulation, seems to be important to maintaining the strength of a tornado. Photo courtesy of Leigh Orf

The way these models work is you have to initialize them with atmospheric conditions, such as temperature, pressure, winds and humidity. Then, to start the model, you sort of give the atmosphere a kick. You basically force an updraft, which starts to grow the cloud. From there on, the model just integrates forward in time.

What is Blue Waters, and why is it important to your team’s work?

The Blue Waters supercomputer is funded by the National Science Foundation. It is housed at the University of Illinois, which also provides some funding and support for it. It is the world’s most powerful supercomputer on a college campus dedicated to research. It has over 700,000 processing cores. So, think of half a million computers essentially working together in one big computer.

I have done other work on other computers that were more modest, but you really need supercomputers to capture the flow features we are interested in. On Blue Waters, a typical simulation will take about three days to complete, and that’s after it actually starts running. Because when you are on a supercomputer, you have to submit your work to a cue, and you often have to wait a while before it actually runs.

(Full disclosure: The NSF is a supporter of PBS NewsHour.)

So what lies ahead for your team? What do you hope will come out of this research?

We’re just starting to chip away at our data and quantitatively analyze the simulated storm. But as far as far as the bigger picture, the whole reason we do this kind research is essential to produce better forecasts of when these tornadoes are going to happen. Too many people still die from tornadoes around the world, but in the United States too. [Tornadoes have killed nearly 850 people in the U.S. since 2010.] 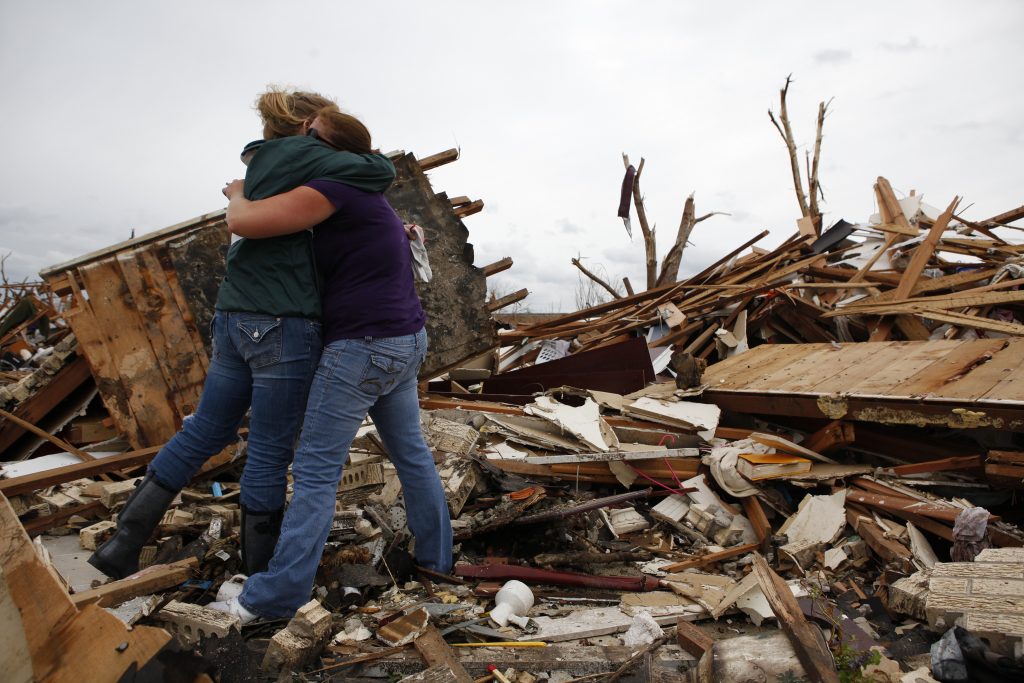 Volunteer Madison Welch (L) consoles Amy Jennings, who found a picture of her father in the rubble of her mother’s home after a tornado struck Joplin, Missouri May 25, 2011. Tornadoes have killed nearly 850 people in the U.S. since 2010. Photo by Eric Thayer/Reuters

We want to be able to say, “In an hour, there’s going to be a tornado. That tornado is going to produce winds of 250 miles-per-hour, and it’s going to go from this region in a city to another region.’” Something very targeted and focused, and we can’t do that yet. We have a false alarm problem when we issue warnings when the tornado is not happening. And then we have the problem where the tornado is already happening, but we haven’t issued a warning.

The challenge is to do a much better job at producing these warnings even before the storm has formed. And the first step is to first understand the storm. You can’t forecast a storm until you understand it, and we’re just getting to the point where we’re understanding what’s going on.