The science behind why your shoelace knot is doomed to fail

No matter how tight you tug, it feels like some shoelaces are doomed to come untied.

Fret no longer, as new research from the University of California, Berkeley, has figured out the physics behind why the knots fail and why some shoelaces are more prone to the mistake.

While the poetic inevitability of the slipup may provide comfort to those afflicted by wayward shoelaces, the research published Tuesday in the Proceedings of the Royal Society of London A may also provide clues for building soft, lifelike robots.

Mechanical engineer Oliver O’Reilly began looking into this telltale problem three years ago, after trying to teach his young daughter to tie her shoes.

“I went online and found all these helpful videos about how to tie your shoelaces,” O’Reilly said. “They were wonderful and very helpful, but I also noticed there were no videos online about why your shoelaces become untied.”

Images from a high-speed camera observation of shoelace knot failure. Researchers found as the knot loosens, a ‘whipping’ motion of the lace strands and loops help to pull apart the knot. Once this begins to happen, force imbalances develop between the bowtie loops and free strands which eventually, and suddenly, lead to runaway untying. The final failure of the knot happens in a matter of seconds, and with little visual warning. Image by Christopher Daily-Diamond, Christine Gregg, and Oliver M. O’Reilly/University of California, Berkeley

This dearth of information pinged O’Reilly’s attention because he studies dynamics — the science of motion — in flexible materials for soft robots. While Disney’s “Big Hero 6” might look cool on the big screen, a lot of mathematical models on how and when materials deform would be needed to build such a robot. So, O’Reilly handed off this investigation into shoelaces as a side project for two of his graduate students, Christopher Daily-Diamond and Christine Gregg.

Right off the bat, they found shoelaces didn’t untie when a person just swung their foot nor when they only stamped the ground. The combination of the two activities, which define walking and running, appeared responsible.

The team acquired a high-speed camera and pointed it at Gregg’s shoes as she ran on a treadmill. Gregg had tied her laces with one of two knots: square (strong) knot or a granary (weak) knot. Here’s how O’Reilly described the difference between the two:

You tie the laces first. That’s where you loop the strands together, one around the other. Next, you form the “bunny” knots. If you loop the bunny knots together the same direction that you tied the first knot together, that’s a weak knot.

But if you do the opposite. Instead of putting one over the other, you switch the order, then you get the strong knot. 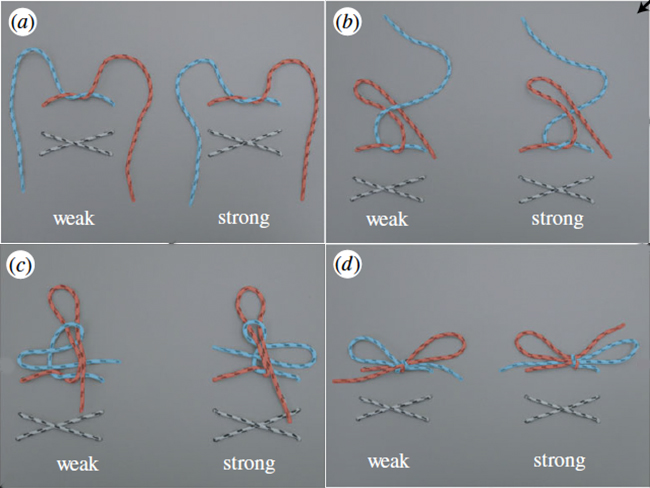 What the team noticed in the videos was nothing happened for a long time, and then — all of the sudden — the laces came untied, typically over the course of two strides. It didn’t matter if Gregg had used a strong knot or a weak knot.

To break down the physics of the phenomena, the researchers attached a small device to the free end of the laces that measured acceleration, and then Gregg went for a walk or a jog. This acceleration creates inertia, which is the tendency for an object to keep moving once it is in motion.

“We were surprised that the accelerations were so high. They’re like 7 g [units of acceleration] ,” O’Reilly said. “By way of comparison, the highest g on a roller coaster are 6.3. Your foot is experiencing these really high g-forces as you’re running all the time. It’s a biomechanical miracle that all of that impact is absorbed through your body and spine.”

The knot itself is under pressure too. The videos showed as the shoelaces bounce up and down with each footfall, the main knot begins to deform. Once the knot opens sufficiently, then the free end of the lace, which is being tugged by inertia, begins to slip out. 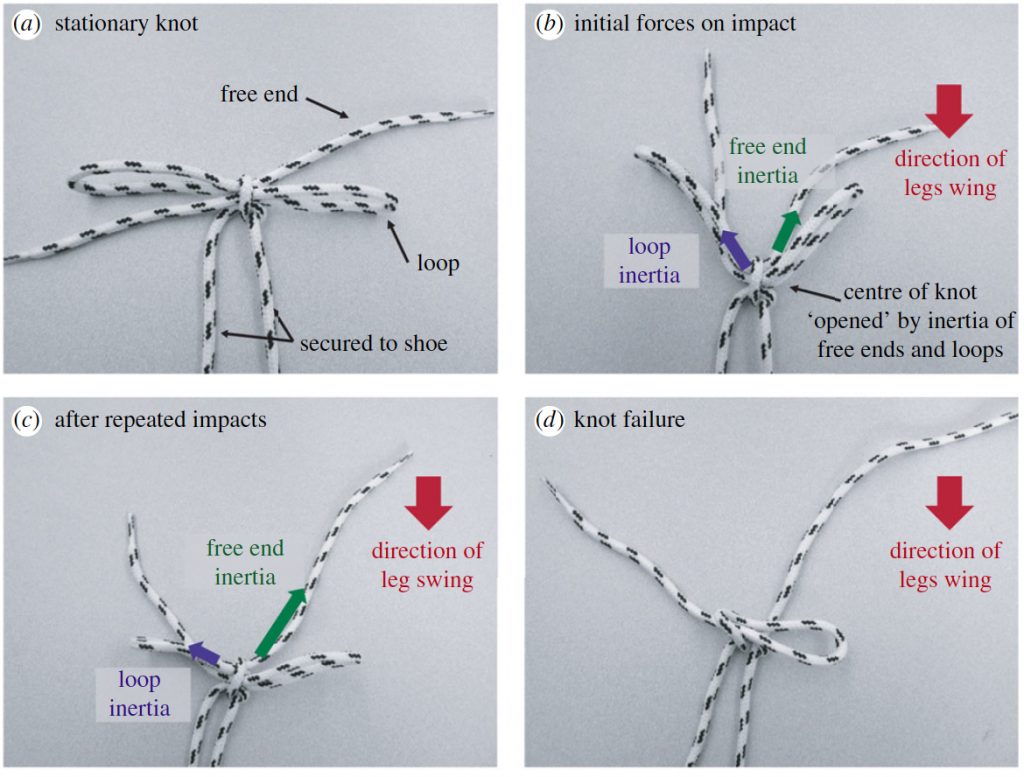 As the leg is swung backwards to impact the ground, the inertia of the free ends and loops pull open the center of the knot. If the free end and loops are approximately the same length, these forces will be comparable. If the knot center is tightened, frictional forces will somewhat ameliorate the inertial force imbalance. Repeated impact causes the center of the knot to incrementally loosen which reduces frictional effects and magnifies the effects of the inertial imbalance between the free ends and loops. Image and caption courtesy of Daily-Diamond CA, Gregg CE, O’Reilly OM., Proc. R. Soc. A, 2017

The team built a robotic pendulum to examine the math on a deeper level. They found the knot’s failure intensifies over time. As the length of the loose end increases, so too does its weight relative to the other strand. This trend adds to the inertial forces, until total shoelace failure. Moreover, the bows of your shoelace are not exempt for this flaw.

A pendulum experiment was used to study the effects of impact and lace dynamics on a knot. Image by Christopher Daily-Diamond, Christine Gregg, and Oliver M. O’Reilly/University of California, Berkeley

When the team added little weights — ranging from 1 to 3 grams — to the free ends of the laces, they found heavier weights caused the shoelace knots to fail at a higher rate. This result suggests laces made from heavier materials may be more prone to screwing up, because unless you’re phenomenally gifted at tying even knots, one free end will likely be longer than the other.

Though the amount of time before a failure varied, the researchers argued these basic knots will eventually slack off. Also, you can try tying a tighter knot, but even those may break your heart.

“We didn’t specifically study double knots, but we know from anecdotal evidence that they sometimes still fail, though less frequently than single knots,” Gregg said.

Left: Fret no longer children of planet Earth, as new research from the University of California, Berkeley, has figured out the physics behind why shoelace knots fail and why some shoelaces are more prone to the mistake. Photo by yellowsarah/via Getty Images